War Heroes: Multiplayer Battle is a Clash Royale-like game for iOS and Android devices. The game’s military theme complements really well with the CR gameplay mechanics and I must say developers did a wonderful job in creating bite-sized “warzones” of real-world iconic battlefields.

Rules are similar to CR – your goal is to destroy opponent’s bunkers before the time runs out. There are various win conditions, and a sudden death mode in case of tie. Before fighting a human opponent in a battlefield, you will have to build a strong deck consisting of human troops, support cards and vehicles. Once ready, you can begin a PvP match and deploy cards to destroy opponent’s bunkers. There are lots of cards to collect, including fearsome “Generals” whose abilities can turn the tide in a battle. Check out our beginner-level War Heroes guide to know how to win PvP battles:

Of three bunkers, “Trench” is not the strongest of all. Your first target should be this building. When the game starts, check the HP of your opponent’s front-row bunkers and you will notice that your opponent’s Trench on the right side of the screen has the lowest HP among the three. 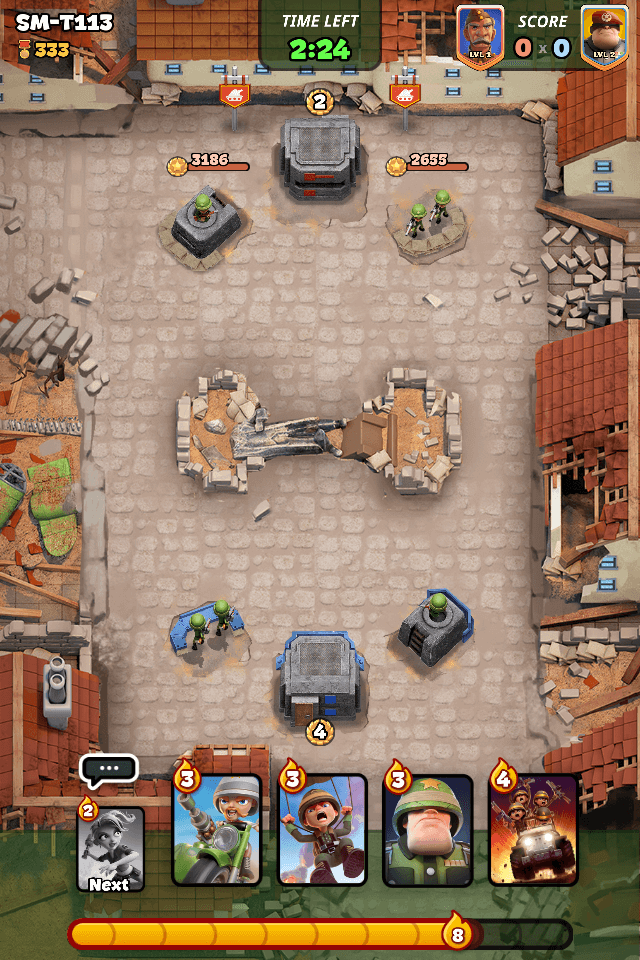 War heroes is a fast-paced strategy game, so it’s always a good idea to have an offensive approach and rush the attack right from the beginning. You should be quick in deploying your best units before your opponent does. But don’t just deploy any unit blindly.

Drop those cards that will make a big impact early on. Since you start with full energy, all randomly drawn cards will be available for deployment. And since your target will be one of the frontline bunkers, cards you drag and drop to the battlefield should include vehicle cards that target buildings.

The Battle Drill is a single-player mode where you play against an AI opponent. Your deck will surely be put to test against an AI drill instructor as battles against it won’t be easy at all. If you want to test a new deck or have just started playing, then I would recommend trying out your current deck against this opponent at the Battle Drill.

When you drag to drop a card on the battlefield, you can clearly see yours as well as your enemy’s territory – the area that lights up is your territory whereas the darkened area is the enemy’s. Make sure you drop slow-moving unit cards on an area near enemy territory so that they quickly reach their target.

Example: If your target is your opponent’s Trench, just drop your tank card close to the edge of the enemy territory so that the slow-moving unit reaches its first target quickly. Once the opponent’s Trench is destroyed, you occupy more enemy land as your territory gets pushed up further and now you can deploy your cards much closer to the remaining buildings.

While going offensive early on is the best way to have an edge in battle, don’t forget to defend your bunkers. Cards that target ground units and support cards are your best bet against an opponent’s offensive strategy, so make sure you deploy them when you see lots of units approaching your bunker. Drop those cards that deal area damage as they will help you to take out multiple enemy units at once.

Support cards such as “Air Support”, “Seeker” or Human units such as “Grenadier” can be quite handy in eliminating groups of human troops such as Recruit Platoon, Riflemen, Brave Soldiers and other units that attack in groups.

Generals play a vital role in War Heroes: Multiplayer Battles (And they have hilarious names!). A General has a special ability that either gets activated under certain conditions or provides certain benefits right from the beginning of a battle.

For example: Roscoe Rock deploys seekers when one of the bunkers is destroyed. George Pattoner auto-deploys a Cruiser Tank every minute during battle. Fidel Kaer deploys 6 soldiers to support your army on every seventh card deployed. On the other hand “Winston Bunkill” adds protective shields on all bunkers as soon as the game begins and General “Vertune” adds a barbed wire that deals damage to your opponent’s ground units passing by it. 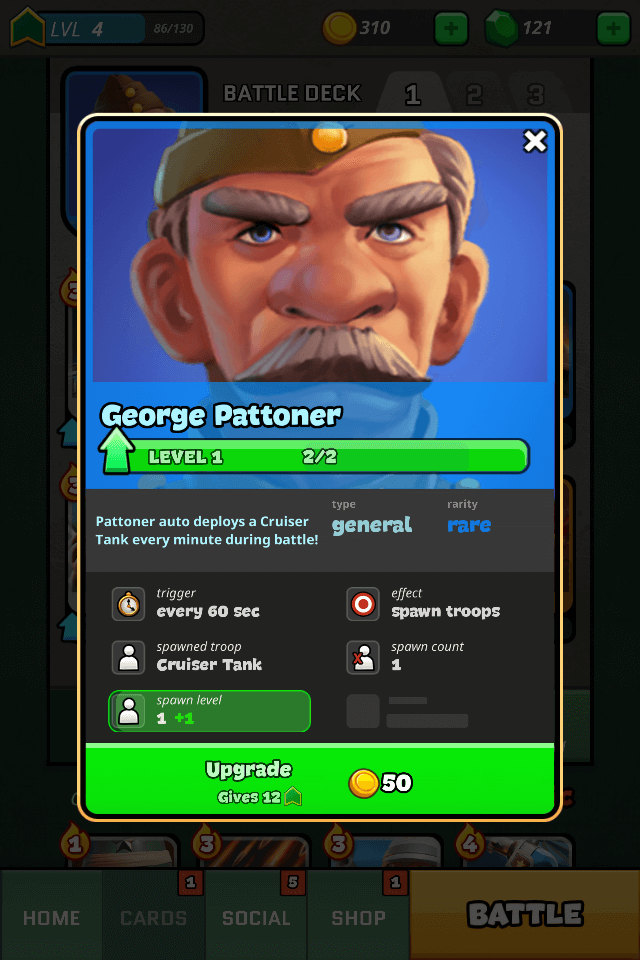 While it’s up to the player to decide which General would be helpful in a given situation, one should always experiment with all unlocked Generals in PvP battles and then choose the best one. You can test each general’s ability at the Battle drill and if you win more number of times using a particular general, use it against humans in PvP battles. I personally prefer Pattoner as he deploys an additional cruiser tank every 1 minute, which bolsters my offensive strategy.

You receive crates on winning a PvP match. Free crates are available every few hours and badge crates unlock when you collect badges after winning multiplayer matches. There are seven different types of crates: 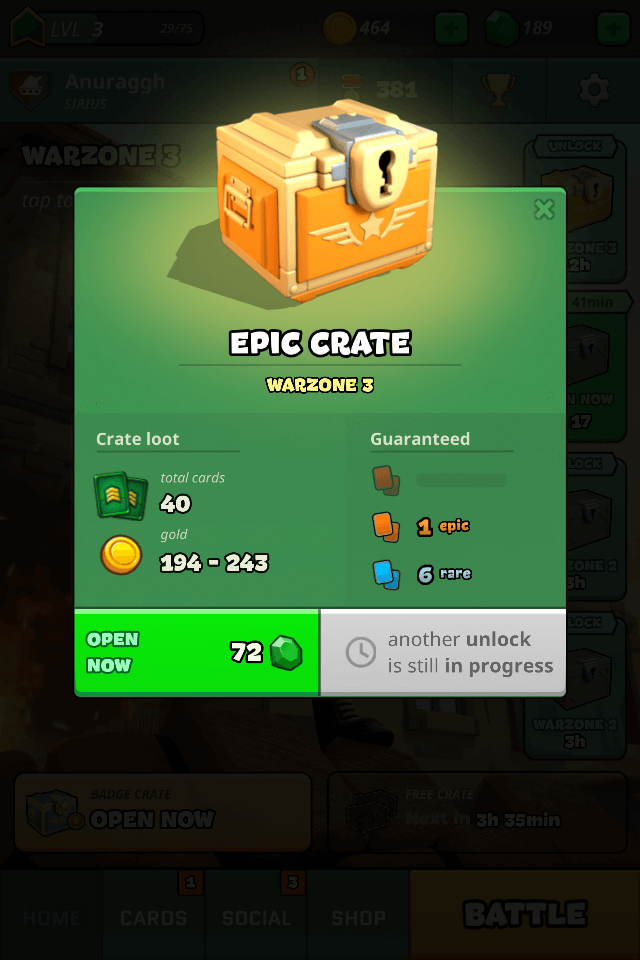 Note that not all cards will be unique. Many will be duplicate cards, which can be used to upgrade original cards. Check the background color of each card to know its rarity. Grey – Common, Blue – Rare, Epic – Orange, Heroic – Red.

As you progress and unlock new battle maps, you might get very powerful cards from crates. The “Bomber Copter” is one such strong card. It can be a game changer once you deploy to the battlefield. With over 2K HP and 1587 area damage, this copter targets ground units and is pretty big! It’s not easy to destroy it.

You will get to unlock new battle maps when reaching a certain badge target. You earn badges when you win a PvP match, but lose them when your opponent defeats you. Keep collecting badges until you unlock a new map. For example: The Berlin map is unlocked when you earn more than 300 badges.

Duplicate cards can be used to upgrade the original card. Upgrading the original card will improve its key stats (HP, damage, DPS etc.). There’s also another benefit of leveling-up a card. Each time you upgrade a card, you receive XP, which is added to your player level bar. Once the bar is full, you level-up. Leveling-up improves stats of all bunkers. It increases damage as well as HP of bunker, small bunker and trench.