Before you start wooing women in The Royal Affairs, it’s important to know what’s the game about, what is its objective and how to progress. Well, the intro does provide some information about the game. You and a rag-tag team of rebels vanquish a greedy and corrupt baron and grab his seat with the sole objective to end people’s suffering.

Once you become the baron, your goal is to rise through the ranks, defeat invaders, capture new territories and gain fame and importance. And of course, get consorts. This beginner-level guide focuses more on gaining prestige. It’s prestige that will help you gain higher positions in your kingdom. You will also learn how to increase a knight’s aptitude, increase your troops and win plot battles.

Your initial objective in The Royal Affairs should be to gain prestige. It’s prestige that will help you get to a more powerful position, and this will ultimately unlock new systems, buildings and features. 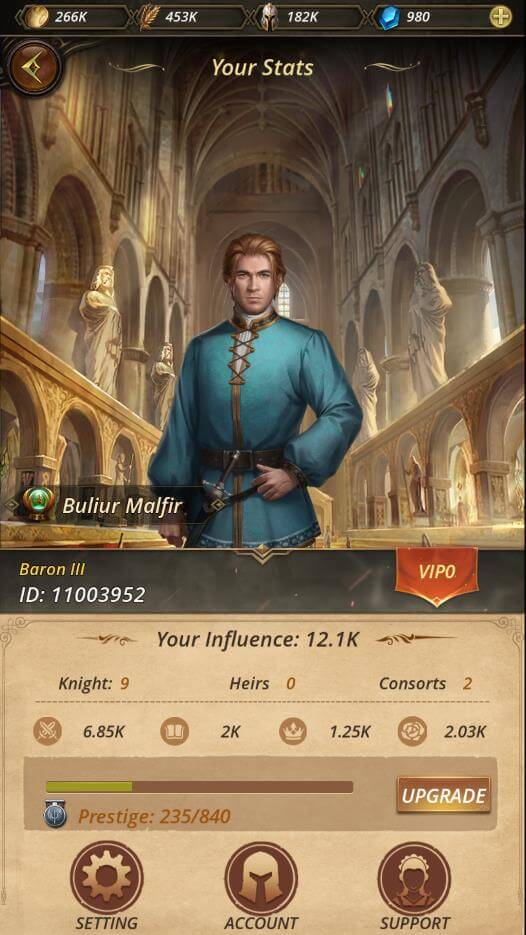 Tap your portrait on the upper-left corner of the screen. This is where you can see your current rank and the number of prestige points (PP) required to reach a new rank. The bar at the bottom shows how much prestige you currently have and how many more PP you need to upgrade to a new rank or position. When the bar fills up, tap upgrade to gain a new position. You will also see several stats just above prestige. These stats are military, charisma, scholastics and politics. To increase these stats, you will need to level up your knights.

Upgrading to a new rank will unlock several new features. You will acquire a new knight, unlock more trade, farming and levy attempts, get access to new buildings and systems. The more levy, farming and trade attempts you gain, the more grains, gold and troops you get. Now that you know what prestige is, let’s find out how to get prestige points.

How to Earn Prestige Points

You earn PP mainly by winning individual plot battles. To win a plot battle, you will need lots of troops and a higher military stat. Battles are automatic, and there’s no troop placement or strategy involved. There’s just a fast-forward button to skip battle animation. Victory relies more on troop numbers and high military stats, which is why your focus should be to get more troops and upgrade knights to improve your total military stat.

1. Go to the Council: Tap the “Council” building and then tap the knight on the left side of the screen. You will gain troops from the “Raise Levy” section. Tap the “manage” button beside it to get troops. Grains will be used when you raise levy to gain more troops. An equal amount of grains will be deducted from the total to get soldiers. Make sure you harvest grains by tapping manage next to “Improve Farming” before raising levy. 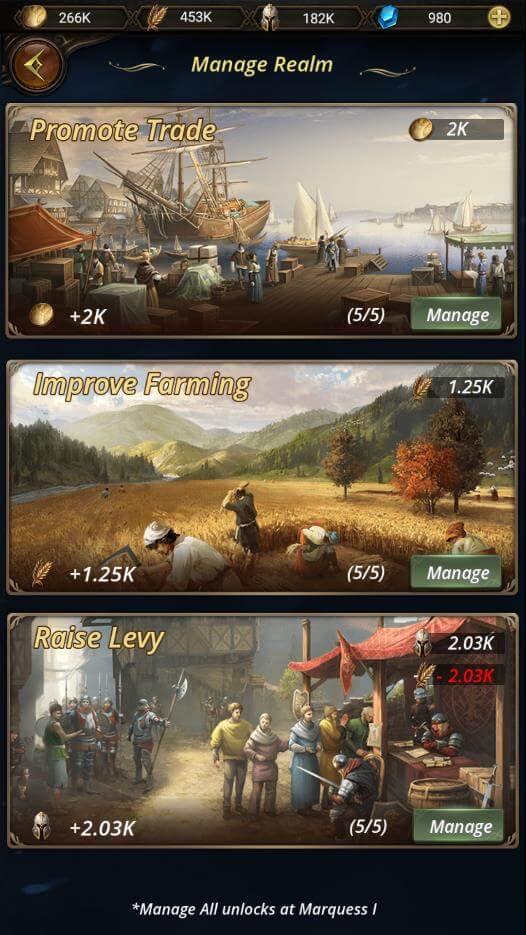 2. Boost a Knight’s Charm Stat to get More Troops: You will have to upgrade your knights to increase their charm stat if you want to increase the number of troops you get by raising levy.

On the “Manage Realm” screen, you may have noticed the number of troops on the “Raise Levy” section. Whenever you tap the “manage” button, troops equal to that number will be added to your total troop count. You will have to increase the number of troops you get from the raise levy section and the best way to do this is by increasing a knight’s “charm” stat.

A knight’s charm is denoted by a rose, which can be seen on his stat screen. You will have to select the best knights that possess a high charm aptitude to gain a higher charm stat upon leveling up. Tap “Knight” and then tap a knight’s portrait. Next, tap “Aptitude” to check the number of stars on his “Charm” aptitude. The more the number of stars, the higher the charm stats increase when you level up that knight. Check each knight to see who has a higher charm trait. The one that comes to mind is James. Start leveling him up. Don’t just level up just one knight. Try to upgrade all knights to increase their charm, which ultimately will increase troops considerably in the raise levy section. You can increase the number of stars on a knight’s charm aptitude by leveling it up. (More on this later)

3. Complete Quests: Initially, Quests would be easy to complete and certain quests will reward you with troops. Tap the current quest ticker on the bottom-left corner of the screen and complete it. Make sure you claim your rewards before taking on the next quest.

4. Get Troops and Grains by Managing Affairs: There are a few more ways to get troops. You might get them if you finish achievements or as daily login rewards. You may also get them for making certain decisions related to military affairs at the council. 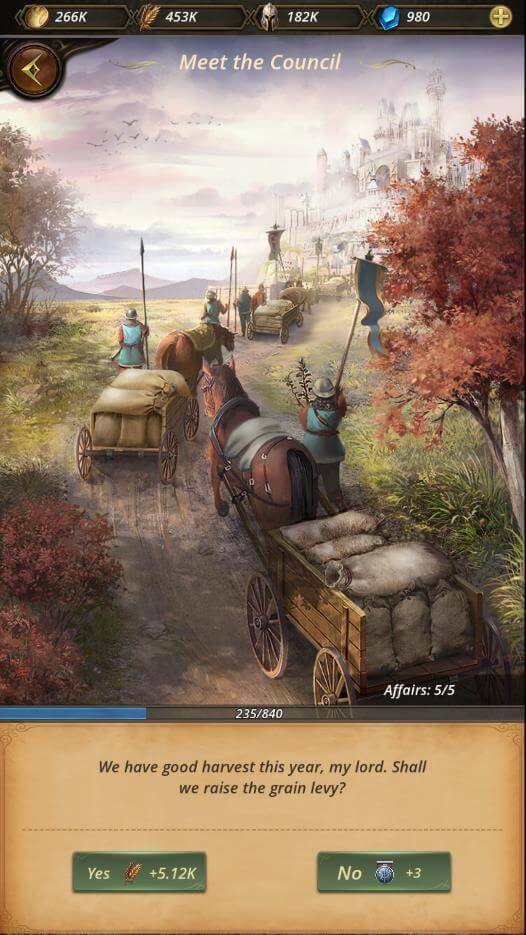 Tap the council building and then tap the knight on the right side of the screen. Under “Meet the Council”, you will be given two choices. These choices range from raising the grain levy to troop levy for acquiring more troops. You will have to select “Yes” to raise levy and get more troops. If you choose “No”, you will get prestige, but the number of prestige you will receive will be very low. You will have a few “Handle Affairs” attempts. Use all attempts to get max troops and then wait until the cool-down time is over to get another administration choice.  You can increase attempts when you upgrade to a new rank.

Note: You can choose “No” if the required PP is 10 and you want those points quickly. In such cases, choosing “No” will help you gain prestige points without having to go to a battle.

Besides having large numbers of troops in The Royal Affairs, you should also consider increasing your total military stat to reduce the number of troops you lose in battle. If your military stat is lower or almost the same as the enemy’s military stat, chances of losing more troops per battle are more. Your military stats and troop count should be significantly higher than your enemy’s as you will have to finish several plot battles to complete a chapter. Each battle consists of several mini battles that begin with attacking enemy infantry and ends with choosing a high military aptitude knight to vanquish the enemy knight.  With so many battles, you will surely lose your troops, so it’s important to buckle up and have a large number of troops + higher military stats to win plot battles and gain prestige. 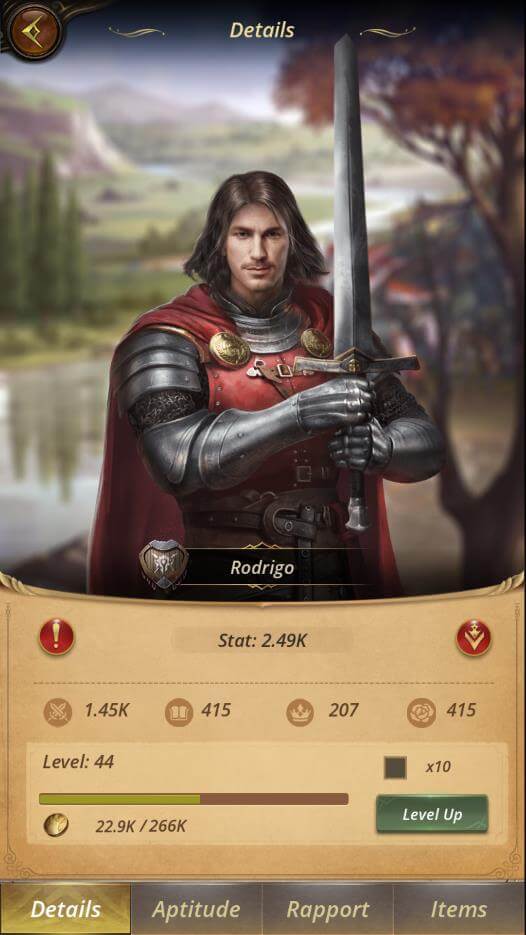 A higher military stat is achieved by leveling up your knights. You will need gold to upgrade your knights. To earn gold, you must complete quests and promote trade at the council. Tap the council and then tap the knight on your left to access the realm management screen. Now tap “Manage” under “Promote Trade” to get gold. At first you will get only 3 manage attempts per trade, grain and troop levy before the cool-down time begins. To increase the number of attempts, you will have to upgrade your rank/position.

Having a high number of troops and higher military stats increases the chances of winning battles and completing chapters. Please note that your military stats should be much higher than opponent’s military stats to ensure a comfortable win without losing troops. After each battle, check your troop count and stats. Keep adding more troops and raising military stats regularly by following the above guide.

In a nutshell, follow these steps to win every battle for acquiring more prestige points:

1. Raise levy to get more troops (make sure you improve farming to get grains as raising levy will cost grains).

3. Level up knights to raise their military stats if you want to increase the total military stats of your kingdom. This will ensure fewer casualties during plot battles. As you fight more and more enemies in each battle, you will keep losing your troops. To reduce the troop loss, you will need higher military stats.

How to Upgrade A Knight’s Aptitude

In The Royal Affairs, upgrading a knight’s aptitude, such as military, charisma, politics, scholastics etc., has its own benefits. For example, during the final fight in a battle, you must select a knight with a higher military aptitude to defeat the enemy’s knight. Aptitudes are displayed by stars and can be seen on a separate “Aptitude” tab. 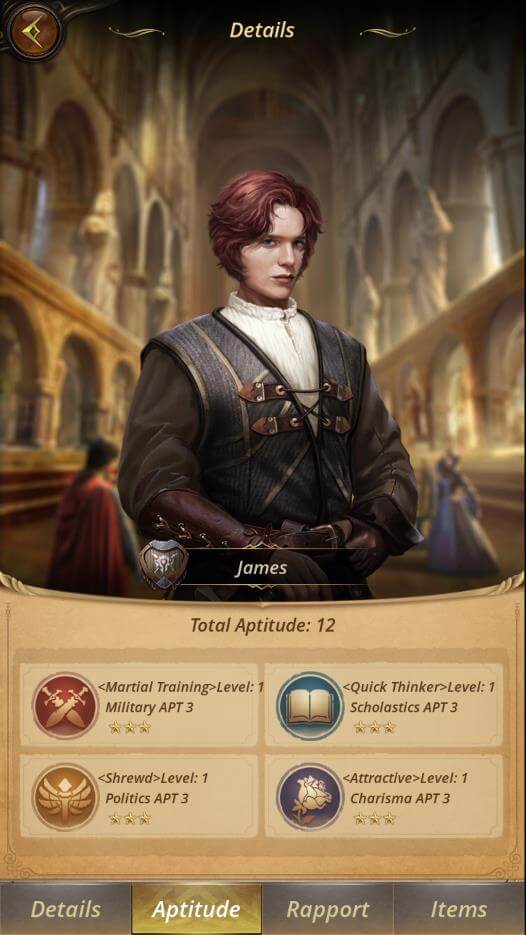 As explained in the above paragraphs, you will need higher charisma to get more troops from raising levy and higher military stats to lose fewer troops during battle. You can increase charisma and military stats to a greater extent when you level up knights that have a higher Military and Charisma aptitudes.

To level up a knight’s military, charisma and other aptitude, you will need aptitude EXP. To gain aptitude EXP, send that knight to study at the academy for 3 hours. Tap the “Academy” building and then tap the plus icon to add a knight. For example: If you want to increase James’ military aptitude from 3 to 6, you will need 600 Aptitude EXP. To get 600 EXP, you will have to send James to the Academy several times. Once you get 600 EXP, go to his portrait, tap the “Aptitude” tab and then tap “Level Up” beside “Trait EXP” to increase aptitude. You can add more knights to the academy, but for that you will need more free slots, which can be unlocked using gems.