Tap Titans 2 follows the adventures of Sword Master as he (and his team) continues his fight against evil once again. Just like the first idle RPG, this game lets you defeat titans by tapping the screen. Well, those giants don’t fight back, but slashing them can be fun, and with more heroes joining your team, defeating titans will be much easier. But as you progress through levels, beating  bosses will be tough.

You will have to level up Sword Master and other heroes to increase his tap damage and hero DPS respectively. The game introduces pet system and gear that can be used to customize your heroes’ look as well as make the more powerful. This beginner-level Tap Titans 2 guide aims to provide key tips and hints to new players who have just started playing the game.

It’s crucial to know how much damage your heroes deal per second, what’s your main character’s tap damage and pet damage, which sets off every 20 taps. To know how much damage your entire team dishes out to those evil Titans, tap the sword icon tab located at the bottom of the screen and then tap the down arrow button located just above the  “Buy +1” button. You can not only see stats, but also find your main hero’s active skills.

First up is “Pet Damage”. It shows the damage your pet can deal to enemies. Your pet will attack when the tiny empty circle just beside it is full. You will need to tap 20 times to trigger attack. Choose the best pet to deal extra damage to titans. (More on pets later)

Underneath Tap Damage are unlocked skills that require mana. You can also see the mana meter. It regenerates every few minutes. You can increase your Mana regeneration rate by spending skill points to unlock the Magic Well talent. There are some more talents that provide more mana. You can find them at the “Skill Tree”.

“Current DPS” and “Hero DPS” shows the total damage per second of all heroes you have hired. Heroes deal damage automatically and the more heroes you hire, the more damage they will deal to titans, which will decrease their HP faster. However, as you move to new environments, Titans will be tough to beat so make sure you level-up each hero using coins.

2. Level Up Heroes to Unlock Their Skills

Leveling up a hero not only increases their damage per second, but also unlocks skills. To level up a hero, you will have to tap the Heroes tab next to the sword icon. You can then tap the blue button beside an unlocked hero to level him/her up. There are various types of skills and each hero possesses unique skills that can help you deal extra damage to  titans, increase mana pool cap, increase tap damage, increase total hero damage, get extra gold/boss gold. Your heroes will have to reach a certain level to unlock a skill.

To know at what level a skill is unlocked, tap the Heroes icon next to the Sword icon and then tap a hero’s portrait. In the screenshot below, notice that Maya Muerta’s third skill will be unlocked at level 60, whereas I have already unlocked the first two skills.

3. Tips to Make the Most of Pets to Deal More Damage to Enemies

Pets are one of Tap Titans 2’s cool new features. With the help of a pet you can deal extra damage to enemies. However, a titan takes damage when your pet’s damage meter is full. The damage meter is an empty circle that appears in the DPS/Tap damage stats screen (Refer “Know Your Tap Damage” section of this guide to know to access the stats screen). Your pet hits an enemy when the circle is full. At first, it will take at least 20 taps to fill the damage gauge and only then a pet will deal a massive damage to a titan.

However, your pet can attack automatically when you reach 500 pet levels. Every time one of your hatched pets is leveled up, its level is added to the “Auto Attack Progress” meter, which can be found on the pet menu. Once the meter reaches the 500 mark, it unlocks auto attack mode.

A pet is leveled up when a duplicate pet is merged with it. Pet eggs are available every 4 hours. An egg icon will appear on the left side of the screen. To hatch a pet, tap the egg. You might get a duplicate pet which will be combined with your original pet and he/she will reach a new level, which will be added to the 500 pet levels meter.

The damage your pet deals to enemies is calculated as a percentage of your central character’s tap damage. If you want to increase pet damage, increase your sword master’s tap damage by leveling him up.

There are different types of pets and each pet offers a unique bonus that can increase your main hero’s tap damage, increase the amount of gold you receive, boost all hero damage, generate mana at a faster rate and increase DPS of hero belonging to a certain class (For example: Basky boosts Melee hero damage).

4. How to Get Diamonds

Diamonds can be used to purchase mana potions and special skills like Power of Swiping, which lets you swipe to attack at maximum speed for a certain number of hours, Doom, which lets you instantly kill any Titan, and Double Damage, which lets you get double the damage on ALL attacks for 8 hours. Here’s how to get diamonds for free:

You can get up to 150 diamonds by creating an account to backup game progress. If you sign up through email, you will receive 50 diamonds. Signing up through Facebook will fetch a whopping 100 diamonds. To access “Account Creation” screen, tap the sword icon tab and then tap the “Account” icon, located beside “Skill Tree”.

Complete achievements. The achievements section can be accessed by tapping the sword icon tab. It is located just beside the skill tree. Tap it to view your achievements progress and collect diamonds. Every time an achievement is complete, the trophy icon has a tiny number above it tap it to collect your rewards.

You can get 25 diamonds by just liking Facebook and another 25 diamonds by following “Gamehive” on Twitter. Make sure you do this via the star tab on the lower right corner of the game screen.

Play the game every day to get daily rewards, which also include diamonds. Currently my Daily rewards calendar tells me that I will receive gems on the 2nd, 5th, 9th and 12th day. However, if I miss a day, then the game will reset the calendar and I may not get those diamonds on the stipulated day.

Make sure you come back daily to ensure your daily rewards calendar does not reset. Along with diamonds, you will also receive rewards like pet eggs, equipment, a random perk, hero weapon, skill point and lots of coins.

5. Equipment Makes Your Hero More Powerful Besides Customizing His Look

An armor, weapon etc. is dropped beside your hero. Tap to collect it and then tap the equipment tab to equip the piece of gear to your sword master.

6. Use More Than One Finger to Tap and Defeat Titans

For smaller smartphones, use 2-3 fingers to tap the screen rapidly. On tablets or larger phones, you can use more fingers to tap the screen at the same time to drain enemy HP faster. Tapping the screen with more than one finger also fills ups the pet damage meter faster and you will be able to deal additional pet damage at a much faster rate. You can try this trick in mini-boss and boss battles, but before that make sure you have leveled up Sword Master and other heroes. 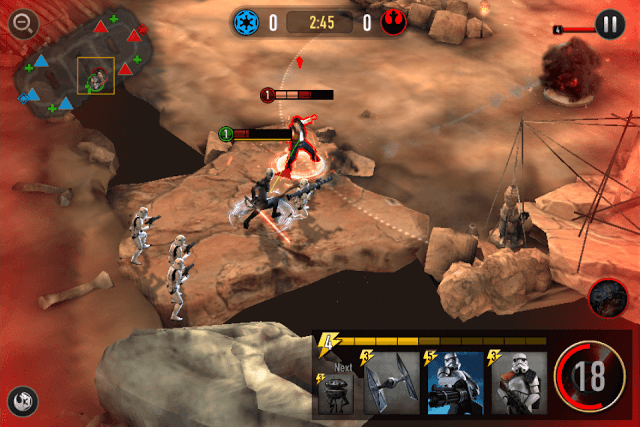