Fans of JRPGs rejoice! The all new Tales RPG can now be played on your smartphones. Bandai Namco’s Tales of the Rays is a “console-quality” role-playing game that lets players explore dangerous dungeons filled with treasure chests and monsters. The game’s all-new battle system makes combat very exciting. Using the simple and intuitive touch-based control system, you can unleash powerful attacks.The game lets you meet your favorite Tales characters and has lots of cut-scenes. It’s almost movie-like, an interactive anime right on your mobile device, with an exciting new battle system and a story mode to keep you busy for hours. If you have enjoyed previous installments of the Tales, then you will find this game a refreshing change. If you are new to this game, then you should bookmark these quick battle tips and strategies:

Tales of the Rays has a fun touch-based combat system. Battle can be very addictive once you know the rules and learn how to perform normal attacks, artes and Mirrage artes:

To perform a normal attack, you will have to tap the right side of the screen. Rapid taps ensure rapid attacks, so do this frequently in a boss battle.

Artes are better than normal attacks as they deal more damage to your enemies. To perform “artes” you will have to swipe diagonally on the right side of the game screen. You can swipe in all four diagonal directions if you want, just make sure you don’t swipe in the same direction multiple times as it will deal less damage to an enemy. However, to use artes, your character requires CC. Check the CC gauge above your character’s profile icon before unleashing artes. If you don’t have enough CC, then you won’t be able to perform these special swipe-attacks. 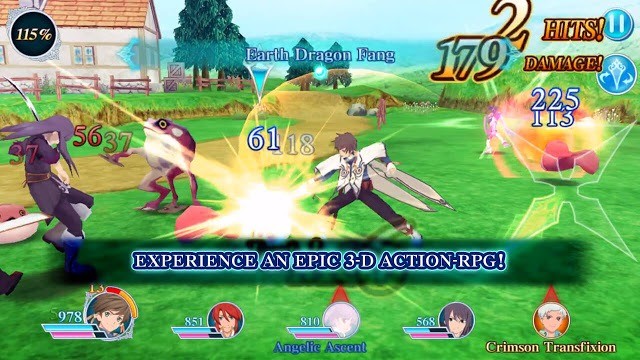 Do remember that CC refills over time – when your character is not attacking. So if you want a full CC refill move back until it charges and unleash arte with full force.

Along with CC gauge, there’s another special attack gauge called “Mirrage Gauge” (MG). It lets you use the super-powerful “Mirrage Arte” (MA) to deal greater damage to enemies. MG fills when you perform artes. You can perform MA when your character’s MG is full. You will notice that your character’s profile icon glow when MG is full. Use Mirrage Arte on bosses to deal massive damage to them.

2. Use Mirrage Arte Frequently to make it More Powerful

Using Mirrage Artes often during combat increases the Mirrage Ratio (MR). The Mirrage ratio is displayed at the upper left corner of the screen. An increase in MR makes your MA attacks stronger. One great aspect of this combat feature is that the MR does not decrease until the quest ends.

As most of you already know, artes are powerful attacks against enemies. However, you should combine both normal and arte attacks to deal more damage. Multiple normal attacks, followed by one or two diagonal swipes will do the job.

Consecutive arte attacks will render them weak and the damage dealt will have minimal effect on your enemies, plus they will easily be able to guard against a barrage of artes, so basically it’s of no use if you are planning to use artes to attack enemies. A proper arte/normal attack combo will increase your Mirrage Gauge faster.

4. How to Break Through Enemy Guard

Enemies blocking your attacks will take less damage. To rip through their defenses, you should move away from the enemy and let your CC reach its full potential. With a fully charged CC, you can easily break their guards by unleashing an arte.

Bosses have their own special attack-blocking guards called the “Iron Stance”, which can be difficult to break, unless you go for a rapid attack/ MA combo. When the guard is activated, bosses will be least affected by your normal attacks and artes. You will have to keep attacking them and once their stance goes down for a while, launch those MA attacks. You will have to be quick as their special defenses are reactivated pretty quickly.

5. Use the Right Chiral Crystal Type to Make Your Weapons Stronger

You will need “Chiral Crystals” to make your weapons stronger. For best results, use only those crystals whose type matches with a weapon’s type. So if the weapon’s type is “bash”, then combine a crystal that belongs to the bash type to supercharge your weapons. Combining crystals with weapons of the same type will get you extra experience points for those weapons.

There’s no shortcut to success, but with auto-play activated, AI will surely find a shortcut to the dungeon mission boss. But auto-play can never be as engaging as manual exploration or battle. When you manually explore dungeons, you will discover treasure chests, which won’t be possible if you choose auto explore. Exploring the entire dungeon, discovering all treasures and beating all monsters has one big advantage: you get mirrogems, which can be used to purchase weapons for your characters.