Timelines offers engaging gameplay and a deep storyline with multiple endings. It lets you build and command starships, recruit characters, teleport an “away team” to solve complex challenges, explore the universe and boldly go where no man has gone before. You will be able to recruit your favorite heroes, including characters from the original series and Star Trek: Enterprise. Space battles are impressive and the 3D visuals are mind-blowing.

Star Trek Timelines is not an easy game. You will need a skilled team to complete challenges and a right crew to power your starship. These beginner-level tips, hints and strategies will help you win missions, destroy enemy starships and have a stronger team.

1. Select a Crew Member with a Matching Skill Icon for the Final Challenge 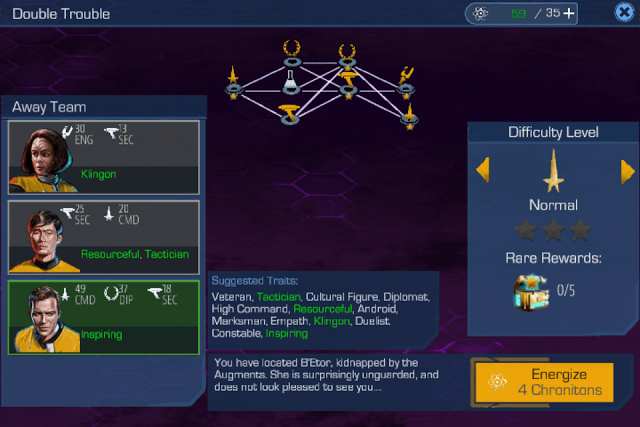 In the above screenshot, I have two crew members who have one of their skill icons matching with the final challenge’s skill icon. Note that matching skill icons in the challenge map have turned yellow. Skills, traits and crew efficiency are key factors that determine victory or defeat.

2. A Matching Skill Icon Does Not Guarantee Success in a Challenge

A crew member has different types of skills. These include “Command”, “Diplomacy”, “Security”, “Medicine” etc. Each skill has a unique icon. When taking up a challenge, select a character whose skill icon matches with the challenge’s skill icon. But wait – A matching skill icon does not guarantee success in a challenge. Skill points also play a key role in winning it. If your crew member’s matching skill’s number is equal to or more than the recommended skill’s number in a challenge, you will be able to complete it easily. 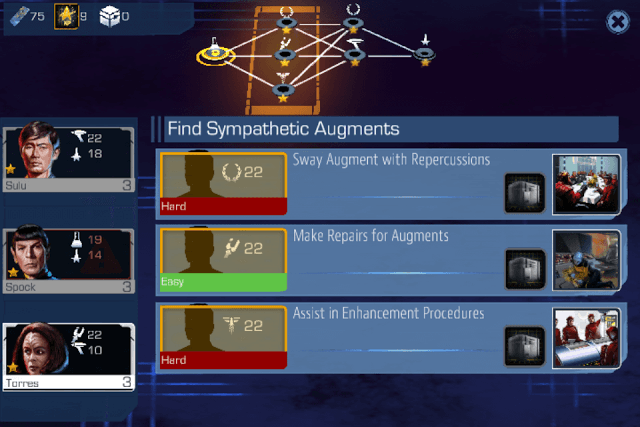 Equip your character with items that you get as challenge completion rewards and mission rewards to add more points to their skills.

3. A Crew Member’s Matching Trait Helps You Complete a Challenge in a Mission

Besides skills, traits also play an important role in challenges. While selecting an away team, try to select those crew members whose traits matches with a traits in the “Suggested” list. A matching suggested trait turns green in color. 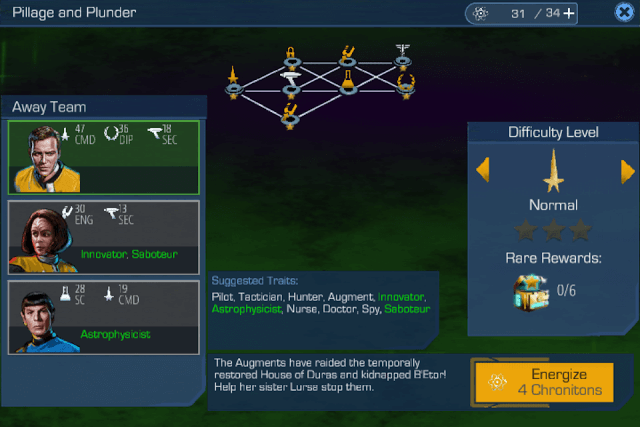 There are different types of traits, such as Tactician, Hunter, Diplomat, Resourceful, Federation, Saboteur, Pilot etc. Each character possesses some unique traits. If a character chosen for a challenge also has a matching trait along with a matching skill, then bonus points will be added to the challenge meter, helping him reach his “Target”. A character’s matching skill along with a matching trait can help you win challenges easily, so make sure you choose crew members that have more than one trait matching with ones on the “Suggested” list.

Some challenges are restricted to a certain trait, so if there’s no crew member with a matching trait for that challenge, it will be locked and you won’t be able to access it unless you have assigned a crew member whose trait matches with the challenge’s chosen trait.

4. How to Improve a Character’s Skills and Starship Ability

Equipping your crew members with items, costumes and weapons will add more points to their skill or boost their ship ability. You will be able to win challenges and ship battles. Equipment can be acquired by completing challenges and missions. Before attempting a mission or a space battle, have a look at the possible rewards.

Chances of getting a rare or uncommon item are more if you destroy enemy ship in 20 seconds. You will get three stars and a 3-star space battle victory grants more rewards. When attempting a challenge, keep an eye on the challenge meter. This meter also has a “Target”. After assigning a crew member to a challenge, the meter at the bottom must be full to receive a reward for that particular challenge.

Try to complete more challenges in a mission to get rare rewards. You may have to replay a challenge or a space battle to get those rewards that you haven’t received in the first attempt.
Rewards are performance-based, so make sure you have the best away team (for challenges), ship type and the crew members assigned to battle stations if you want to earn rare rewards.

Your crew plays a major role in space battles. Assign crew members to your starship’s battle stations to boost its stats and initiate stronger, accurate attacks and evade enemy fire faster. Make sure you add a crew member to a battle station with a matching skill. The skill icons of both crew member and the battle station should match. 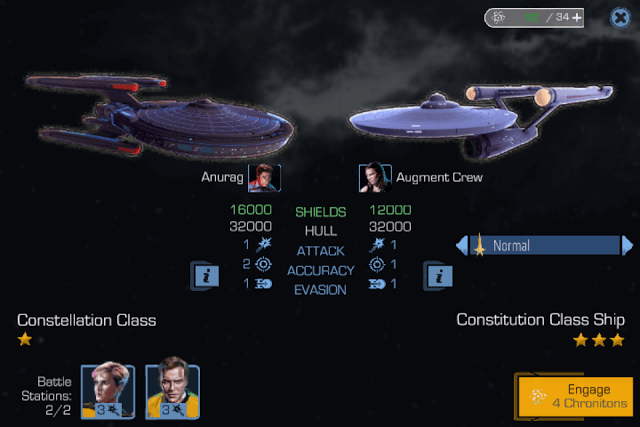 To know each crew member’s skill, go to “Manage Crew” and note down each team member’s skill (Command, Security, Medicine etc.). If you don’t want to waste time noting down each character’s skill, then just tap on a battle station, and then tap a crew member. If skills don’t match, you will receive a warning message in red text – “Slot Requires Crew with DP (Diplomacy)/CMD (Command)”. 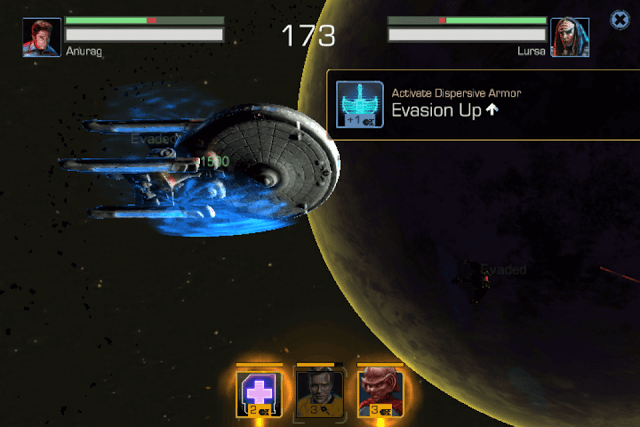 A Ship also has these three key attributes (Attack, Accuracy and Evasion) and by choosing a crew member with one of those attributes, you can boost a ship’s attack, accuracy and evasion. For Example: Captain Kirk has an Attack attribute. If you assign him to your ship’s battle station, he will boost your ship’s “Attack” ability by initiating a stronger attack when you tap his charged portrait. Travis Mayweather will boost your Ship’s Evasion and so on.

6. Train Characters to Equip Higher-Level Items to Them

Training a character in Star Trek Timelines not only lets you level-up a character and reach max level faster, but also allows you to equip higher-level clothing, weapons or items to him. To train a character, you will need training materials such as Basic Survival Training. Such items can increase a crew XP by 10 points. 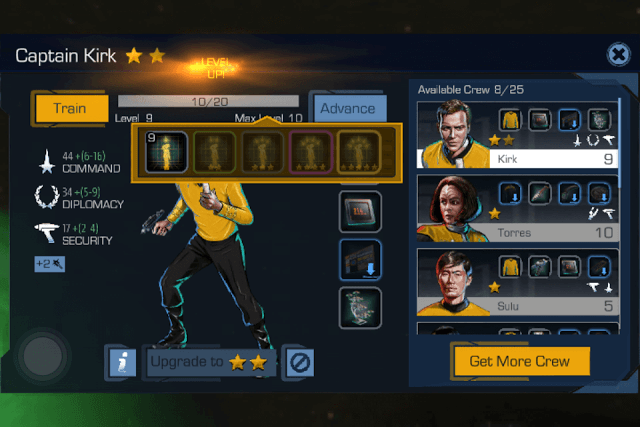 There are advanced training materials that can help you train and level up crew faster. You can upgrade a character’s max level by tapping on “Advance” to upgrade his max level, but you will need all 4 equipment slots filled.

7. How to Find Items, Weapons and Clothing

You can equip weapon, clothing or special item to a character to improve his skill points and ship ability. A character’s equipment slot glows, indicating that an item/weapon/clothing can be equipped to him.
Many items are mission-specific and to get them you will need to complete certain missions. You may even have to replay older missions. To find and obtain equipment for a crew member, go to “Manage Crew” and tap on the empty equipment slot. 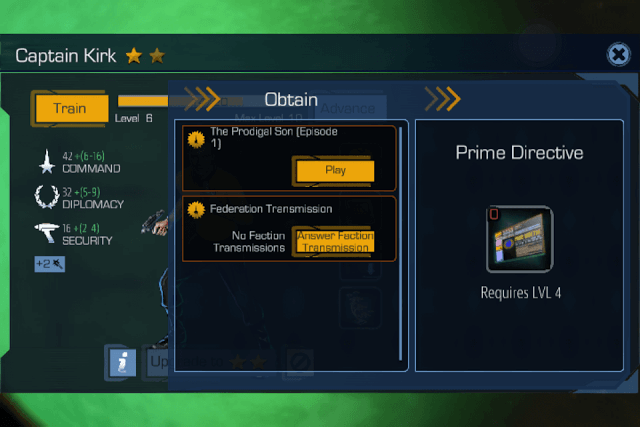 Next, tap “Get” to know the whereabouts of the equipment. You will see a list of missions or space battles. They can grant the required equipment after successfully completing them. However, you may not get some equipment after the first attempt and may have to replay the same mission to obtain it. For example, to get three stars and rare rewards, you will have to destroy an enemy ship in 20 seconds. Rewards, especially the rarer ones, are performance-based and so you will need a strong crew to get them.

You get free scans that may help you scan the entire universe for salvage items. If you want more items, crew and ships, then head straight to the Time Portal. You can buy a basic reward for 10000 credits.