Mighty Games’ Shooty Skies is a vertical scrolling “shmup” with a voxel twist. The game not only pays tribute to Crossy Road’s visuals and characters, but also pays homage to 80s arcade machines, Nyan Cat, vending machines, floppy disks and many more. Shooty Skies lets you control an aircraft, shoot down weird enemies and collect coins and power-ups. There’s also a boss mode at the end of a level.

The game provides an assortment of weapons for your airplane, each more destructive than the other. Quad Guns, Wide Guns, Homing Missiles and Honey Badgers will help you destroy multiple enemies. However, things won’t be easy once you reach the third level. These must-know tips and tricks will help you destroy enemies easily, make the most of power-ups and collect rewards.

Your voxelated fighter airplane shoots bullets automatically when you drag and move your finger, so you don’t have to look at enemies every time you move. Just focus on enemy bullets/projectiles and try to avoid them by moving your airplane left to right and vice-versa. 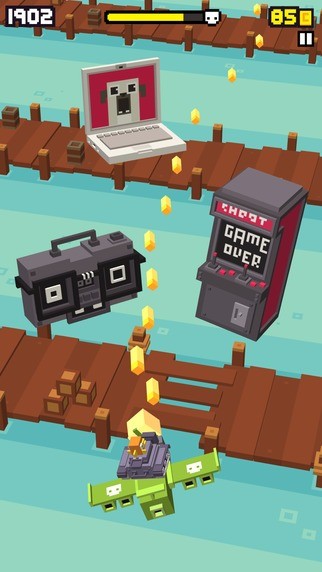 You may also move up, then down to steer clear of enemy bullets while your aircraft’s machine guns or missile launchers takes care of enemy airplanes. Equip your aircraft with “Homing Missile” or “Quad/Wide Guns” to take down enemies faster.

2. Do the 45 Degree Bank to Avoid Missiles

Dragging and moving your finger left and right will make your airplane do a 45 degree bank. Doing this will help you avoid missiles. Just make sure your aircraft makes a steep turn in the opposite direction of the missile. So if the missiles are approaching on the left hand side, move and turn right to perform a steep turn and vice-versa. Use this only for those enemies that launch homing missiles or single missiles.

3. Keep an Eye on Bullet Spreads and Quick Enemies

Some enemies launch bullets that spread out and reach every corner of the screen. The evil retro arcade game is one such enemy. You can slip in between two bullets by moving forward and then go back. Don’t move too fast when you spot such enemies. Focus on the bullet spread and quickly move past the space created between two bullets.

There are some enemies that don’t shoot bullets. They just rush towards the aircraft and may even go back and forth to confuse players and break their rhythm. Tiny toy robots are one good example. You should destroy them immediately before they come to closer to your aircraft.

4. Use Special Attacks Whenever You Get an Opportunity

You will need to drag and move your airplane to shoot, but if you lift your finger for a few seconds, it charges up a special attack. Tap on the screen again to launch a devastating strike on multiple enemies at once. As you complete more levels, tough enemies will appear and destroying them with your guns may be harder. If you get a chance, lift your finger and then get it back to position to launch a special attack.

Don’t lift your finger for too long as your airplane will stand still more enemies will start appearing on the screen shooting bullets and missiles. Your unit will be destroyed before you launch an airstrike. The airplane’s special attack charges up even if you lift your finger for 2-3 seconds. So keep an eye on enemy movement patterns, bullet and missile patterns and lift your finger when you see a big opportunity to take down enemies.

5. You Don’t Have to Pay Coins Every Time to Buy Guns

Each gun or missile launcher costs coins. But, sometimes you can get them for free just by watching a video. When you tap on a gun, you may see two buttons – one that shows coins and the other is a play button.

When the video option is available, the play button turns yellow. Tap on it to watch a 30 sec video and get a gun free for a few hours. Note: Whether you spend coins or watch a video, the purchased gun will be available for a few hours and after that you will have to repurchase it to use it again.

You may also get a gun for free via the mystery Box. Keep playing to fill up the mystery meter and once it reaches the box, it opens and reveals a surprise gift.

Shoot down blue or red gift boxes and collect blue or red power-ups. Don’t miss the red power-up. Collect it to add another fighter aircraft to your unit. Your squadron can then blast multiple enemies and destroy them faster.

Collecting the blue cube will add an extra armament to your airplane. It could be wide guns, quad guns or homing missiles. The extra gun will act as a secondary weapon, which means you will have two guns destroying enemies at the same time.

Camera Shake, although adds a stunning visual effect, can sometimes be a bit bothersome and may hamper your overall flight adventure. Turning off this option has made it easier for me to complete levels. To turn off camera shake, follow these steps:

When the game ends, a gear icon appears on the bottom left corner of the screen. Tap on it and then tap on the button beside “Camera Shake is On” to turn it off. Now go back and enjoy blasting pixel villains.

Besides earning coins after shooting down enemies, there are other ways to earn coins. Coins are usually used to purchase armaments, and you may need them every time because guns and missile launchers aren’t permanently equipped once you purchase them.

You will have to spend coins again, after the free time limit is over.

Keep an eye on the “Free Gift” icon. It appears every after few hours or minutes. A button with a gift box icon will appear on the game over screen. The free gift option grants coins.

You may also watch 30 second videos to earn coins.

In Shooty Skies, you don’t have to move forward to collect floating coins. They get sucked into your airplane. Keep calm, make a steep turn to avoid missiles and keep collecting power-ups to deal more damage to enemies.