Spellbind Studios’ Rogue Wizards is a dungeon crawler with turn-based tactical battle elements. The game lets you explore randomly-created dungeons, fight monsters, disable traps, take help from your allies and your pet to deal more damage to enemies, learn spells and use them against ferocious foes and collect lots of items by breaking barrels/opening treasure chests. The game’s uniqueness lies in its randomness, as every dungeon generated will be completely different than the previous dungeon, making gameplay engaging and challenging at the same time.

The game’s wizard tower lets you learn and enhance your magical spells so that you can use them in battle. Much importance is given on spells. There are different types of spells and each spell can be more devastating than the other. The game also lets you craft your own weapon and armor using materials. There are lots of things to do in Rogue Wizards and lots of battles to win. So what are you waiting for? Read on to find beginner-level tips and strategies if you want to beat enemies, take advantage of allies and pets and explore dungeons successfully:

1. Know Which Weapon/Armor is Stronger and Equip That Item to Your Character

Tapping the backpack icon at the lower-right corner of the screen will bring up your inventory. This is where all collected items, such as weapons, materials, potions and armor can be found. You can get them from treasure chests or by breaking barrels scattered all around a dungeon. You can also buy them from a merchant while adventuring or from the shop on your home screen.

Once you have collected items, tap your backpack and press a weapon or armor kept on the right side of the inventory (where all collected items are kept) just to check whether it’s more powerful than your currently equipped weapon/armor. 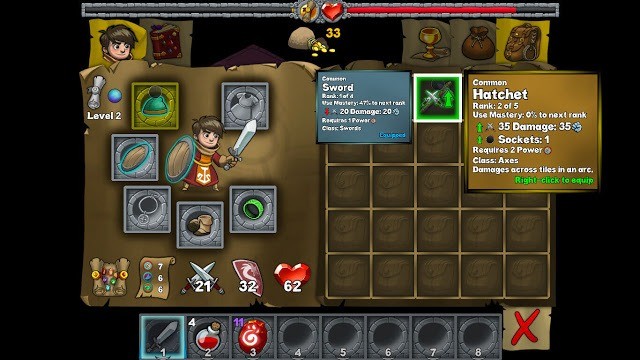 The above screenshot shows the common Hatchet does more damage than my common sword equipped to my hero. All I had to do was drag and drop the hatchet onto the weapon slot on the shortcut bar at the bottom of the screen to replace it with the common sword, which deals lower damage than the hatchet.

Keep doing this for all equippable defense items (your armor) and equip only those items that are in the green, i.e. stronger than your currently equipped items. Just tap an item to see if majority of its stats are in green and only then equip it.

2. How to Make Use of Pets in a Dungeon

Your adventure is incomplete without a pet not only because of the cuteness factor, but also the immense help he lends to your character while battling enemies. You should take along pet, especially the one that deals ranged damage. In many occasions, my pet helped me a lot by attacking enemies from a distance. Sometimes, I just had to skip a turn or move back a bit, and my pet would do his duty, attacking each approaching enemy without moving an inch.

Keep in mind that your starter pet is chosen randomly. Each pet has a unique skill. Not all pets attack – some can be used to heal your character. You can check a pet’s skills and other info before deciding to take one with you to battle. If you think your current pet is not useful in battle or you want only an attacking pet, then you can always exit and start the game again until you find your desired companion.

Whether you move, take a potion, or skip your turn, enemies will keep moving and a pet with a ranged attack skill will keep attacking any incoming enemy, reducing his HP little by little. You can make the most out of your pet when there is more than one enemy. You can move back one tile at a time if you spot too many enemies and then let your pet and ally do the damage. By the time they are closer to your character, their HP will be reduced to some extent (a few weak enemies may be killed even before they get near your character). You can then kill them one by one in one or two hits without taking much damage.

3. Get More EXP by Beating All Enemies in a Floor

Make sure you explore all parts of a floor in a dungeon before moving to the next floor. Destroy barrels to get items and coins, and most importantly kill all enemies to receive extra EXP. Also, don’t forget to open all chests. Chests require keys and many times a key may be hidden in another chest. You will also receive extra EXP for opening all chests.

4. Have the Right Items Equipped to Your Character before Exploring Dungeons

If you want to explore every nook and corner of a floor and don’t want to die in the middle of a dungeon, then make sure you have equipped all necessary items to your character, such as elixirs of life, armor items and a weapon that deals the highest damage among other weapons in your inventory. Also don’t forget to keep some space in your backpack. To free up space, sell all unwanted items at the shop (supply depot).

Take at least 6 elixirs of life with you before starting a new dungeon. On your way, you might get elixirs from barrels. The more HP potions you have, the better as the enemies you will face on every floor won’t be too easy to beat. You can gulp down a potion by tapping the red elixir when your  HP is less than 50 percent or when your character shows visible signs of weakness (his face will turn pale and he will look tired).

5. How to Tackle Multiple Enemies

Rogue Wizard’s tactical turn-based battles make it a bit easy for players to deal with multiple enemies at once, if they employ the right tactics. In battles where you have to confront multiple enemies, an ally and a pet that deals ranged damage is a must-have.

You can also choose a magical spell to deal ranged damage to tougher enemies. Tap an enemy to know his weakness against a particular spell type (Fire, Ice, earth etc.) and then use that spell against him. You will have to unlock a spell by assigning spell points to it. You get a few spell points on leveling up, so make sure to kill all enemies in a floor to receive bonus EXP, so that you can level up faster.

If you are stranded in a narrow lane and see a room full of enemies, you can retreat and switch places with your ally, who will move forward and start attacking any incoming enemy. And because a narrow passageway can only accommodate few people, it will be easier for you and your team to deal with enemies one by one. You can move back further and let your pet and ally do the job for you. Basically, your objective is to scatter your enemies so that some of them can be dealt by your allies while you focus on a select few enemies.