Hyperbeard’s Pingo Park is an addictive creature collector game. Gameplay is very simple and teens will love it! 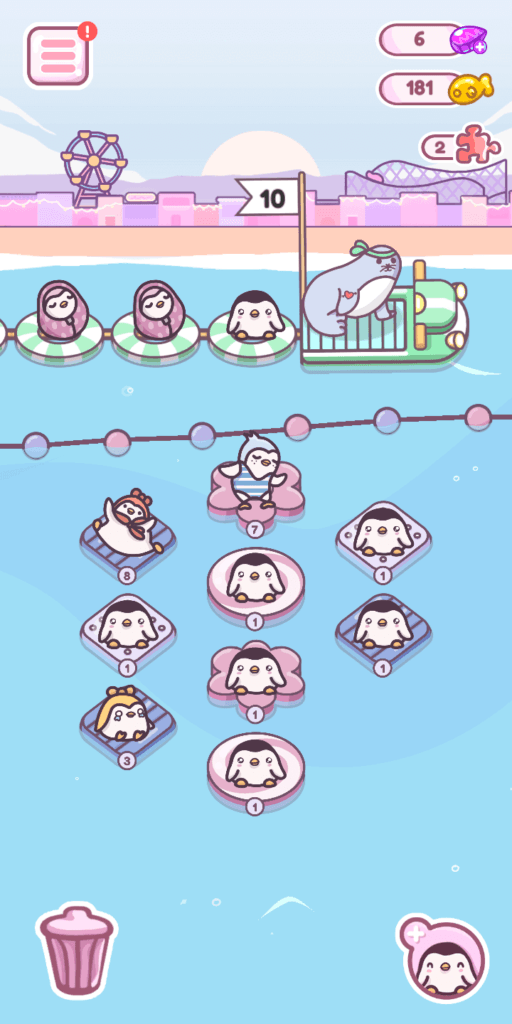 Large icebergs with clutches of eggs have broken off from a glacier. But thanks to the big-hearted seal, the lifeguard, all eggs have been taken to a safe place. As new eggs hatch, the lifeguard escorts baby penguins to a safer place – a Pingo Park – where you will have to merge them to create new adorable new penguins. He will bring 10 or more penguins every now and then, but it may take some time to rescue them. To speed up time, you can tap the clock icon on the bottom of the screen when he goes out to save more penguins. Here are a few more tips and hints to collect lots of new and adorable penguins.

1. Pay Attention to the List of Penguins to Know the Last Combination 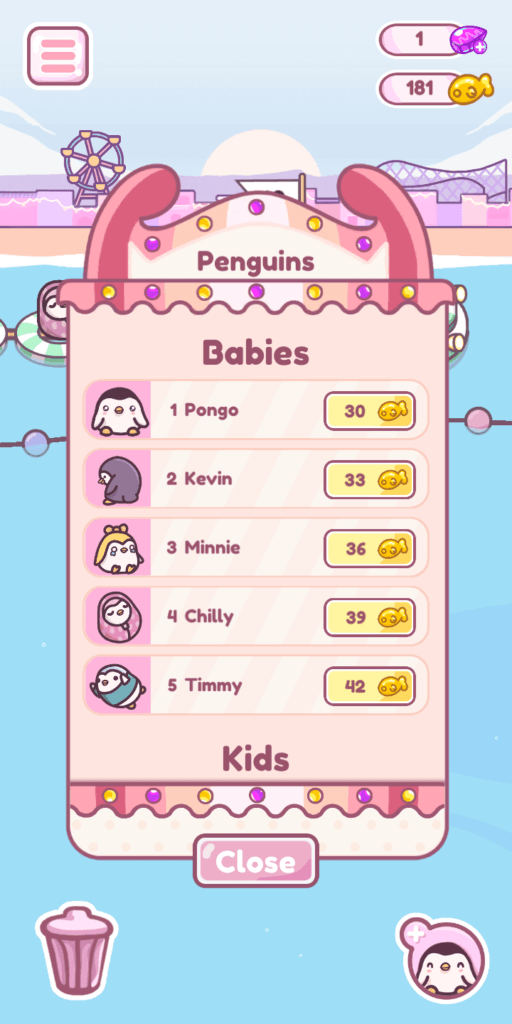 Tap the penguin icon on the lower right corner of the screen to bring out a list of unlocked penguins. The last discovered penguin is the combination of two second-last penguins of the same type, the second-last penguin is the combination of two third-last penguins of the same type and so on.  Keep this mind when combining penguins, because you will start with the first penguin – “Pongo” more often than not, so the list will be helpful to get the combination sequence right. Also, pay attention to the number under each penguin on floating mats or “floaties”. This will help you know which penguin you will be discovering next. Merging two “number 2” penguins will create penguin number 3 and so on.

Note: Sometimes, the seal doesn’t bring the first penguin, i.e. Pongo to you. He may have a different penguin for you. Don’t panic if he drops a different pingo. It may make your task easier, just check the number of that penguin after it sits on the floatie and then bring out the list to check who’s next after him. This way, you won’t be confused and it will be easier for you to discover newer penguins.

2. How to Obtain Golden Fish

One of the main uses of the Golden Fish is to use it to obtain gems, which is used to speed up the time taken by Mr. Seal to rescue and bring more penguins to your park. For every Pingo you move to the floatie you will receive one fish. Keep collecting fish and use it when you have run out of videos. Watching videos is one of the ways to speed up time, but you will get a limited number of videos each day. Once you reach the video limit, tap the fast-forward button just below the timer and then tap on the gem button. Doing this, you will use gems to speed up time. Watching videos and using gems are a few great ways to bring Mr. Seal instantly to your park.

3. Ways to Get Gems for Free

Like I said earlier, gems are used to ensure that the seal brings all penguins to your park instantly. You can exchange 30 fish for a gem or complete some offers to get gems for free. Tap the gem icon on the upper-right corner of the screen to open the Gem Store and then tap “Free Gems”. Next, tap “OK” and you will be taken to a page filled with various offers, which range from installing an app and reaching a certain level to finishing tutorials or completing surveys. Under the gem store, you will also find the converter on the bottom. You will have to spend 30 fish to get gems.

Another fun way to get a free gem or two is fishing. Yes, Pingo Park has a fishing mini-game. 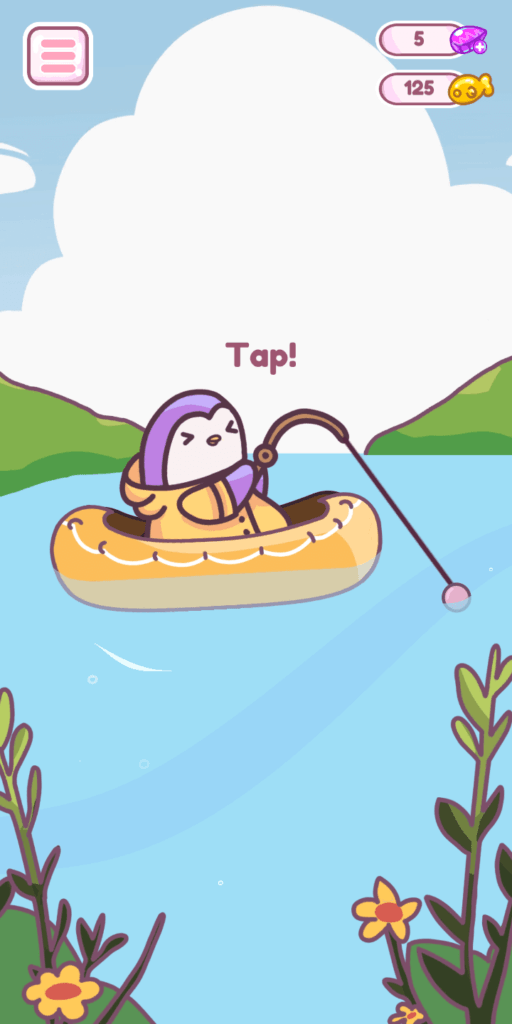 When an adult penguin is ready to fish, a notification icon will be displayed on the menu on the upper-left corner of the screen. Tap the “Fish” button and then tap the screen to allow the penguin to catch fish. You might get a gem or some other reward. Once you are done, fishing will be available within a few hours.

4. Spend Fish to Purchase a Penguin of your Choice

Many times, you will have only one penguin and want a matching one to combine them. The penguin you want needs to be created by combining all previous penguins one after another, but you want that particular creature instantly. Well, Pingo Park has a nice little feature that lets you purchase any unlocked penguin using golden fish. 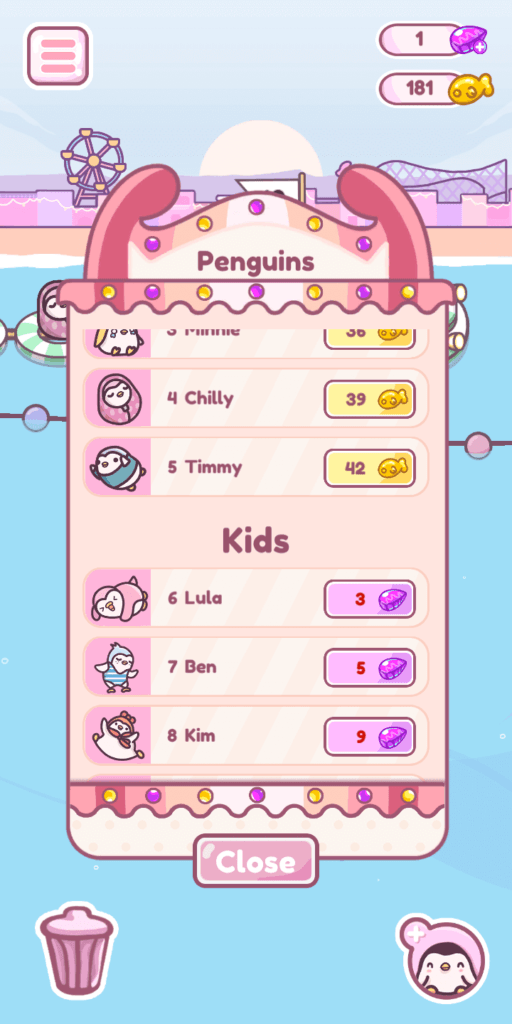 So, if you want the cute Timmy to merge with the Timmy on your floatie, all you have to do is hit the penguin list and spend 42 fish to get one. However, not all penguins can be bought using fish. You will also have to spend gems for newer penguins, from the “Kids” category onwards.