Mystic Guardian is a JRPG-style game that lets you explore dungeons, bash monsters and complete quests for rewards and glory. Your adventure takes place in a fantasy-steampunk world that combines machine and magic and is full of diverse characters, monsters and deadly enemies. There are 2 playable characters and each character has a totally different story-line. There are also hidden stories within each story and multiple endings.

The game’s hack-and-slash battle system employs a unique combo skill that lets players use the attack and skill button to deal damage to enemies. It also boasts over 100 skills, a host of weapons and armor. You will learn various recipes which can help craft consumables and other items.

Mystic Guardian is easy to play and the handy tutorial in the beginning of your quest will teach you the basics. But if you want to know what works best against a horde of monsters, how to fight bosses and make your character stronger, just follow these useful tips and strategies:

1. Use Combo Skills Instead of Active Skills to Take Out a Group of Enemies

On your journey, you will encounter scores of enemies. Monsters and guards will attack in droves. Using one of any four active skills or the attack + combo button (SP) is the best way to defeat a group of attacking enemies. You will need to tap the attack button and then the “SP” button to use various combo skills, such as throwing enemies into the air and then slashing them, continuous damage and “wide and continuous damage”.

When you press the attack button, the SP button is replaced by a combo skill icon. Each combo skill is denoted by a unique icon. Keep experimenting with different combo attacks, but if you want to know what works best, then the 4th combo, i.e. “wide and continuous damage” will help you take out lots of enemies. 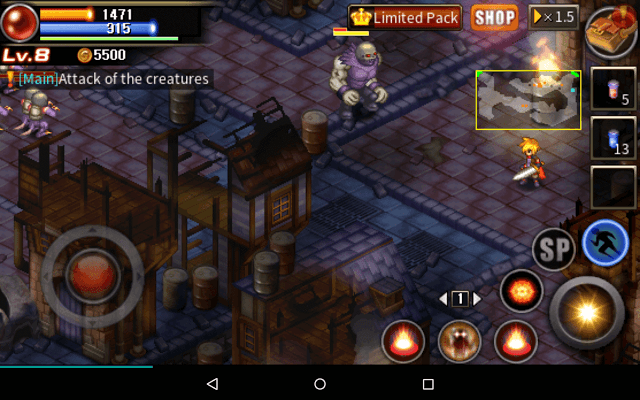 I would recommend using combo skills to attack normal enemies instead of an active skill as the latter has a cooldown time. Also, an active skill uses SP (denoted by the blue gauge displayed at the upper-left corner of the screen), and when it is consumed, it takes some time to refill, unless you are using an SP potion to quickly refill it. With combo skills, this is not a problem as the stamina gauge (consumed when using combo skill) replenishes quicker than the SP bar. You can, however, combine combo skills + active skill to deal max damage if you face tougher enemies.

While moving from one dungeon to another, you will face various types of enemies. Here’s how you can defeat them:

Normal: These are the ones that usually attack in groups and can be easily taken out using combo skills (attack button + Sp button).

Strong: Such enemies have a “guard” gauge underneath their HP gauge. You will have to break their guard using combo skills. You can also use active skills if you want their guard gauge to decrease faster. You can easily kill them once their guard is broken.
Shooting: These are ranged enemies that attack from a distance. They are weaker against melee attacks, so move your character near a ranged enemy and then attack him.

Boss: They usually appear at the end of the main mission and are very powerful. Such enemies have 3 strength gauges and possess different attack patterns.  A proper strategy would be to avoid getting hit by a boss (you can move around or run away to a corner to avoid his attacks) and then hit him when he is not attacking or in the least dangerous position.

While adventuring, you will come across dungeons that act as an entry point to multiple dungeons. They usually have several doors, which need to be accessed one by one to enter another dungeon. After exploring a dungeon you will have to come back and select another door to enter an unexplored dungeon.

When you come back to the main dungeon, you will see respawned enemies. Fighting them would be a waste of time when you can easily avoid them and move to the next door. There’s no need to kill all enemies in an explored dungeon as you can flee or use “Dash” (consumes SP, so use it wisely) to move past enemies. However, if there are too many monsters or guards and it’s difficult for you to move past them, then you can use combo skills to get rid of them.

4. Take your Map’s Help to Find Your Destination

The mini-map is one of most useful features of Mystic Guardian. It not only shows your current position but also shows your destination, making it easy for you to choose the right path. You can also get access to the “Scroll of Return” (in case you have collected them during your adventure). The Scroll of return lets you return back to the world map, where you can choose previously explored locations. You can re-explore them for loot and rewards. Use it when you are lost in a complex maze of dungeons. Just tap it to view an enlarged mini-map. Also don’t forget to tap the name of your main quest to know your current quest (and side-quests if any).

5. Make Your Character Stronger by Distributing Points to Various Abilities

Fight enemies and complete quests to earn EXP and level-up. Once you reach a new level, you will receive stats points which can be used to raise your character’s abilities – STR (strength), VIT (vitality), DEX (dexterity) and INT (intelligence).

There are two types of treasure boxes: normal wooden crates which can be broken in 1-2 hits and metal boxes that can be opened with a key. You can open a metal box with silver or a golden key. You can get a silver key from side quests.

A golden key can be earned by completing the main quest. There’s also some chance of getting one after eliminating a large group of enemies. Chances of getting a rare item are high if the box is opened using a golden key. A treasure box replenishes every 3 hours, so you can come back again and use another silver/golden key to open it.

If you are ill-prepared for a boss fight, then chances of your character dying before the boss are more. However, you can bring him back to life by watching a short video. Under “power resurrection” tap “watch ads” and watch a video if you want to resume fighting the enemy.

Look for sparkling stars on a dungeon and move closer it to learn a new recipe. The recipe will be updated under “Skill” > Recipe section. Tap the recipe book that has an exclamation mark to know what materials are required to craft a new object. You might get materials by eliminating a large group of enemies. Look for materials on treasure boxes and crates lying scattered all around the dungeon.

What are the swords that you can buy in the store used for? You also get them for quest rewards,The games is telling me that a Max of 12 but I have 125 so far .

If You Use This Glitch I Know Your Money Will Disappear.....Tryna Figure Out How To Get My Money Back Not Even Showing 0$ LMFAO But Hey I Don't Need Anything.

You can get it by defeating ranged creatures.

Where do you obtain minor arcane core? I'm having a hard time grinding it, ranged monsters seems to rarely drop it.

You have three choices on what to do to obtain them: 1. Just re-enter areas with ranged creatures that drop it. Can get quite boring after sometime but that's how you usually get them to drop things. 2. When you are already in the process of making a weapon/clothing/whatever, there's an option to buy your ingredients if you have incomplete number of needed items. This needs a crazy amount of soulstones, though. 3. Pay attention to your armor and weapons and Equip them carefully. Some have qualities that helps with drop rate.

I haven't played in a while so I'm sorry for not using the right terms or words to explain.