Mow Zombies is a fast-paced zombie shooter game from Digital Natives. Step into the shoes of a gritty female mercenary. She’s the last woman standing, the sole survivor of the battle against the undead and has access to several advanced weapons.

Pick the most powerful guns and destroy the merciless horde before they devour all flesh and bone. Rescue survivors and find a safe place for them. Fight various enemies, including huge bosses.

Mow zombies has excellent top-down graphics and the one-finger controls are super easy. These tips, tricks and strategies will help you find a way to deal special Zs, complete stages and unlock exciting new features.

Special Zombie Types and How to Tackle Them

Normal zombies are easy to tackle – The minute these brain-eating monsters enter the circle, they are smashed to a pulp. But special zombies are more powerful and they just won’t walk towards your character. They will sprint, leap at you, even try to snipe you down and explode when they come closer to you. Here are a few dangerous zombies or Zs to watch out for:

Purple sand monster: You will come across these pesky creatures every now and then in almost all stages. The white ones are less dangerous, it’s the purple ones that will slowly crawl and then suddenly pounce at you. The best way to deal with them is to eliminate them before they jump.

Red Sprinters: They appear harmless until they rush towards your character. Wearing red clothes, they run so fast that no bullet can stop them, but you can. Just before he sprints, a red path appears between him and your character just when he enters her range. Move away from the red path as soon as you see it.

Sniper Z: Wearing a yellow uniform, they are large zombies that wield a sniper weapon. You wouldn’t even know when you are hit when you are busy battling enemies. But if you pay attention to the big red scope or target hovering around your character, you can avert this danger. The target appears just before he snipes you down. Just move away from the target and you will be fine, but make sure you eliminate a sniper zombie ASAP!

Construction Worker Z: They are burly, wear those hard hats, just like construction workers and throw large boulders at you. Don’t let them come closer to you and move away when you spot an incoming boulder.

Z Dogs: They are very quick and will pick up speed when they enter the circle around your character (same goes for those small sand monsters). Good thing is that your character will instantly attack an incoming zombie dog, but be vigilant and keep moving your character backwards as she keeps attacking dogs.

Purple Police Z Equipped with Laser Guns: Purple zombies are extremely dangerous because there won’t be any warning before they attack. They will shoot laser beams. The only way to defend yourself is to keep an eye on purple laser beams and don’t let them hit you. Like snipers, you should always try to eliminate purple zombies earlier.

SWAT Z: Armed with a riot shield, SWAT Z are not easy to beat. Since these tank zombies equip a shield for protection, it will take some time to eliminate them. Holding a shield, they will keep moving towards your character. Laying down traps, such as landmines to weaken them (use the mouse trap secondary weapon when unlocked) is the best way to deal with them.

Bomb Carrying Z: They carry bombs, run quicker than others and explode when they come closer to your character. Eliminate them when they enter the circle.

Large Spiders: Those with arachnophobia stay away! Smaller spiders are easy to kill, but it’s the larger ones that might give you a panic attack. When you kill a large spider, tiny spiders emerge out of the dead spider and scuttle towards you. A flamethrower would a be good weapon choice against them

Want to know how to unlock the camp and get construction workers? Check out what we have written:

Make the Most of Turrets

In certain stages, you will have to place turrets on designated zones. Turrets will shoot any incoming zombies, helping you thin the herd much faster than before.

The best way to make the most of turrets is to stand closer to them or move around them as you shoot the undead. The combined efforts of turrets and your character will kill all enemies at a much faster rate than normal.

Note: Turret stages are interconnected. Once placed in a particular stage, they can again be accessed in the next few stages, including boss stages. You just need to explore the next few stage to find them and stay near them to eliminate enemies.

Equip Secondary Weapons to Your Hero

Before we learn more about weapon chips, let’s find out what are secondary weapons in Mow Zombies and how to unlock them.

Secondary weapons will be unlocked when you pass stage 30. Tap on the weapon tab on the bottom of the screen and then tap on the “Second” tab. You will see several weird contraptions and gadgets.

Second weapons can come really handy during tougher missions and most of them look like traps. For example: the CAAAT-228 is a large mousetrap that can instantly kill smaller zombies when they come in contact with them. It can also seriously injure giant enemies when they come closer to it. Your character will keep placing mousetraps every few seconds. Make sure you are just behind mousetraps after placing them. Enemies moving towards your character will surely fall for the trap.

You can unlock new secondary weapons once you pass a certain stage. But that’s not all, you will also have to need weapon chips to unlock it.

The mousetrap weapon will be unlocked once the second weapon tab opens. Advanced secondary weapons will require weapon chips.

Besides weapons, talents must be upgraded to make your character more powerful. Our Mow Zombies Talent Guide will help you know about every perk and their upgrade benefits.

Get the HR-18X Weapon from Seven Days Login

The seven days login bonus has a lot of cool rewards for players. This includes gold, unique weapons and diamonds. Play the game daily to claim login bonuses.

On day 2 you will obtain the HR-18X, which is one of the best weapons in Mow Zombies. It’s known for its wide bullet spread and shoots several bullets at once, so you wouldn’t need a fire angle powerup for it, although the same power-up will increase the bullet spread and angle.

Make sure you always upgrade HR-18X using gold to increase damage. As you progress through various stages, you will obtain more powerful weapons. Use this weapon against enemies until you find a much better gun to match its caliber.

Use the Robot Powerup to Destroy Enemies

While battling enemies, you will come across various powerups such as firepower, shield etc. There’s also a special category of powerups that turns your character into a car or tank. These special powerups are denoted by letters C – Car, T -Tank.

Another special powerup is the Robot. Denoted by the letter “R”, this powerup rarely appears in a stage. When it does, grab it. A yellow robot starts bashing zombies, rapidly rotating and attacking any enemy that comes in its way. It remains on the battlefield for some time. Check the timer (white circle) on the upper right corner of the screen. The circle keeps decreasing until it’s no more and this is when the robot vanishes.

How to get Weapon Chips

Here are some ways to get weapon chips in Mow Zombies:

During a combat mission. Some stages contain chips. There are higher chances of finding a weapon chip in boss stages.

Want more gold? Maybe you might find another weapon chip from the same stage you played a few days ago? Surely, there’s no harm in retrying previous stages to farm for gold and other resources.

Replaying a stage costs energy, so make sure you have enough energy with you before playing the same level again. Tap on the stage number just above the girl on the home screen to get a full list of completed stages. Tap on a previously completed stage to play it again and finish it to get gold.

Equip Robots to Your Character

In Mow Zombies, you will unlock Robots when you pass stage 40 boss mode. A new tab opens on weapons screen, just beside secondary weapons.

Once you unlock Robot, you can start using the WWM-601 right away. However, you will need to unlock the rest using weapon chips.

The WWM is a drone bot that accompanies the protagonist wherever she goes. It attacks any incoming enemies from a fair distance. There are several more awesome robots to be unlocked.

This is a no-brainer, but upgrading weapons after every stage increases the damage deal to enemies. As you progress, you will unlock powerful weapons that need more gold to get upgraded. Make sure you triple your gold earnings after each mission so that you can upgrade your current weapon from time to time. You will have to watch a video to triple your earnings. 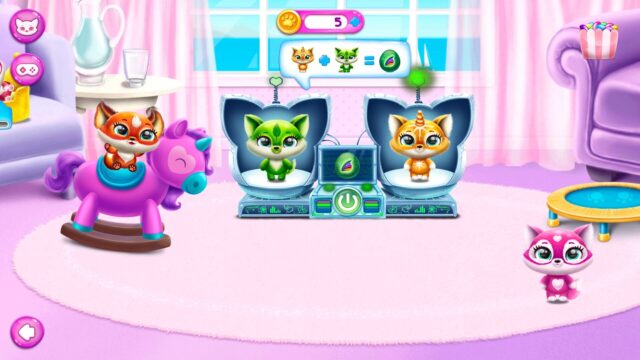 Previous
Fluvsies Game Guide: How to Get all Pets 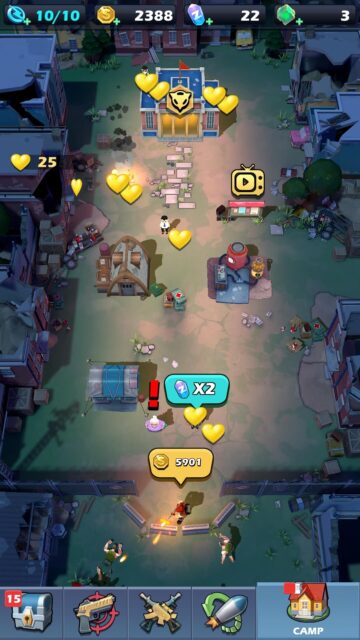 Next
Mow Zombies Tips: How to Unlock the House
Click here to cancel reply.

I have fire bow weapon, and it's upgraded 500 level, I want to upgrade my weapon for but there is one pop-up comes out higher level not open yet. Kindly advice me how to open the higher level.

I have to upgrade my fire bow.