IGG’s Mobile Royale combines kingdom building with real-time strategy gameplay elements. The game lets you develop and expand a mighty fantasy empire, trade resources and items with clan members, rescue cities from invaders and raiders, join a guild, get help and assist guild members to build their fantasy kingdom. The game also lets you summon a guardian dragon during combat.

Mobile Royale’s visuals are superb! You will fall in love with the bright 3D graphics, the animated battles and the mesmerizing fantasy kingdom. Real-time battles are a treat to watch! And although you won’t have control over your troops during battle, you will still love to take part in campaign stages. The game lets you deploy powerful heroes to fight bosses in a battlefield. You can use a hero’s ability during combat. Each hero has a unique ability which can be used against enemies to defeat them. With the help of these tips, hints and strategies, you will learn how to setup your army, acquire and make proper use of dragon skills, carry out diplomacy requests and make the most of guild helps:

1. Why Should You Complete Quests

Quests offer a steady stream of rewards. Keep completing them to earn: 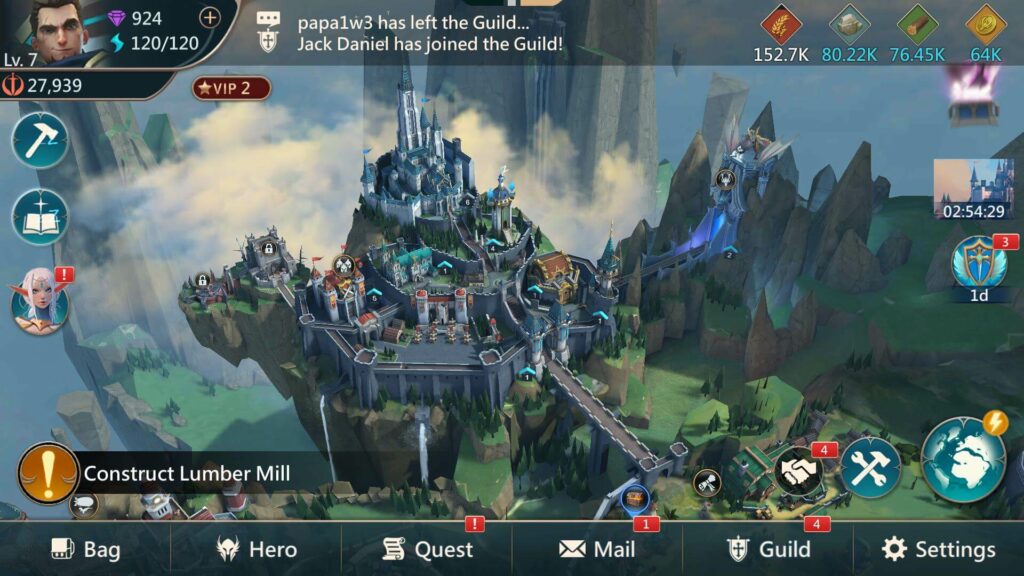 You will receive special rewards, such as royal chests, which contain hero shards, runes and crafting items, resources/battle boosts and crystals after completing a campaign. Chests you receive are sent to your “Bag”. You will have to tap “use” to open a chest.

The ticker on the lower left corner of the screen shows the current quest. Just tap the exclamation mark and you will be taken to that location or particular building. You can then complete that task to get your rewards.

To know a list of quests and the rewards they offer, tap the “Quest” tab and scroll down. You will see quests under different categories, such as construction, research, guild activity. Tap a quest and rewards offered on completion will be displayed on the left side of the screen. You don’t have to follow the recommended quest. Just tap some of these quests and complete them. Don’t forget to claim your rewards.

Mobile Royale’s campaign mode lets you fight deadly enemies to free clans from invaders and raiders. Battles are in real-time, although you will only have control over a hero’s special abilities. However, you can set up an army consisting of ranged, infantry and cavalry brigades against enemies. Setting up an army is crucial for winning a battle. You will have to select a brigade whose “type” is stronger than the enemy brigade. 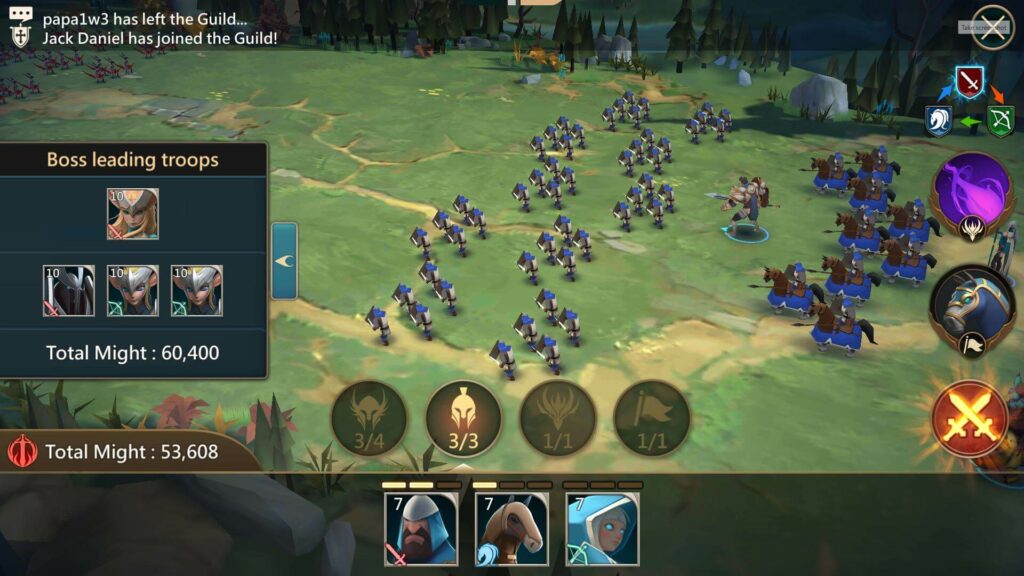 Check the enemy brigade types and then select your brigades based on their selection. If the first round of battle has two ranged brigades and one infantry brigade; you army should comprise of infantry and cavalry brigades.

3. Deploy More than One Brigade of the Same Type to Activate Bonuses 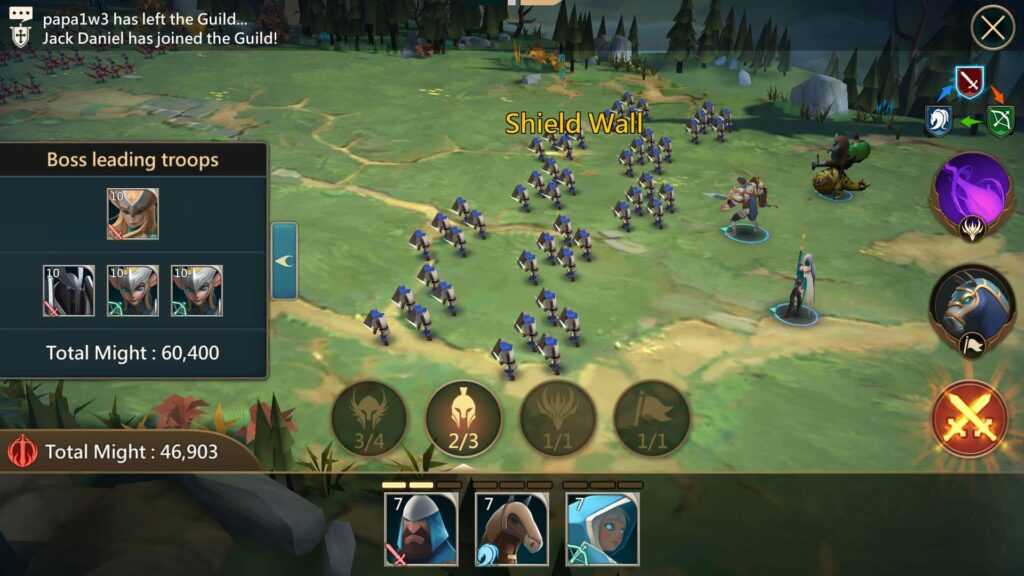 Choosing the right brigade type is important, but in many occasions, you will have to select two brigades of the same type and this is when these passive bonuses are activated.

Clan backups can be of immense help, especially when you are losing troops during battle or when you need to strengthen your existing troops. As you already know, the campaign mode lets you protect different clans from raiders and in return they provide military backup to help you defeat enemies. While battling, you can call for support from a clan by tapping a clan’s troop on the right side of the combat screen. 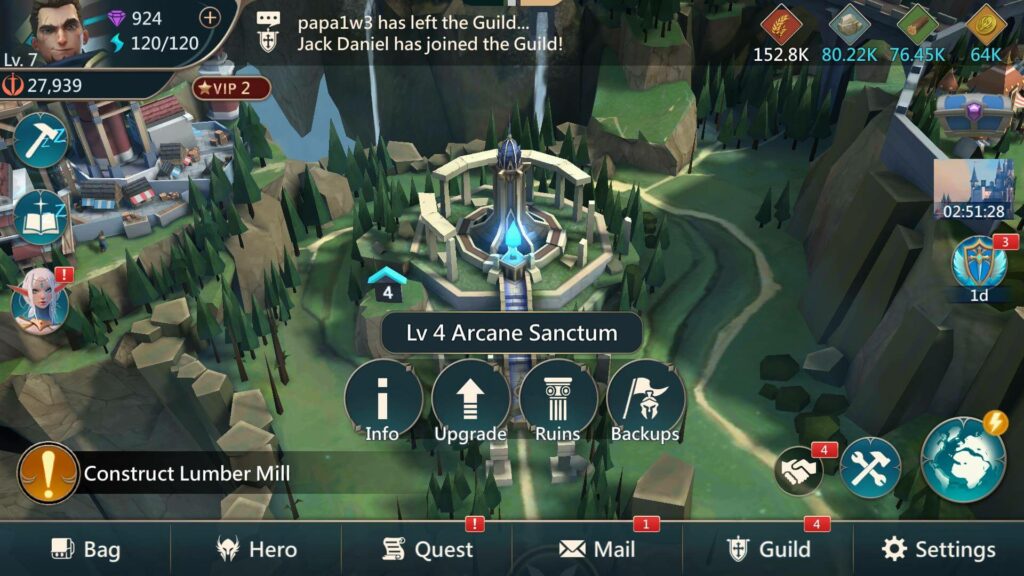 To receive backup, you will have to unlock and build clan ruins in your kingdom. To build a ruin, go to the Arcane Sanctum. The sanctum is located beside the clan soul stone, a structure which gives access to campaign mode. Tap the sanctum and then tap “ruins”. Select a ruin and place it on the empty space on your kingdom to get backup armies from a clan. 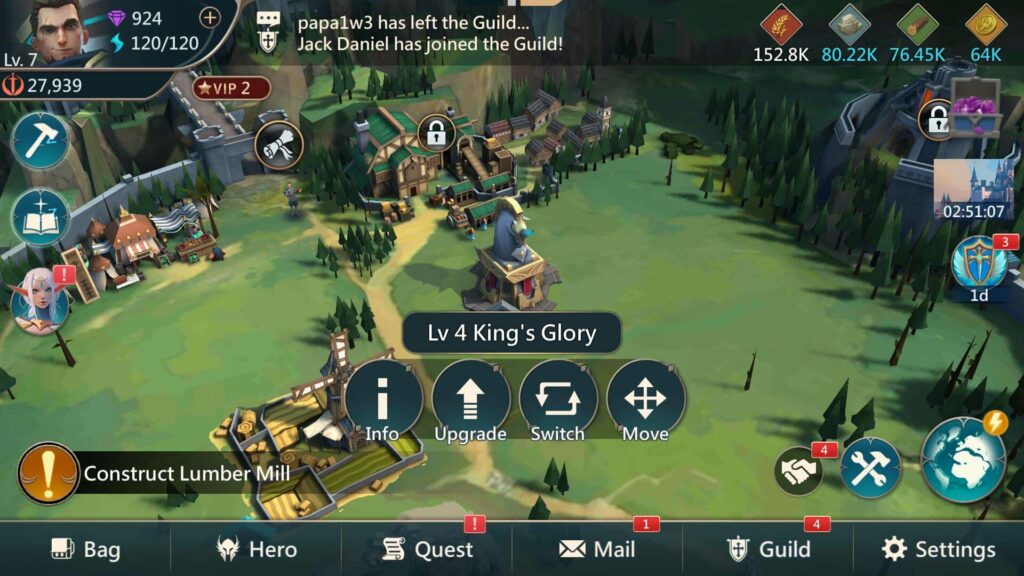 Complete certain campaign stages or acquire shards if you want to unlock a new ruin. For example: The “Solar Tower” ruin can be unlocked when you clear “Elite Campaign Stage 2-6” or when you acquire a certain number of solar tower shards. You will get shards as rewards when you finish a chapter 2 stage. The “Elite” mode or hard mode unlocks when you complete all normal stages of a campaign. You will have to complete all stages of chapter 2 – Sunsingers to unlock elite mode and then complete all stages until stage 6 in elite mode to unlock the Solar Tower ruin. You can then place a solar tower ruin on an empty space to unlock the Sunsinger clan’s soldiers. In the next battle, call for sunsinger troop’s support while fighting enemy.

If you want backups from more than one clan, you will have to raise the ruin limit. In the beginning, the limit will be set to 1, which means you can place only one ruin on your kingdom and call backup corresponding to that ruin. Upgrade the Arcane Sanctum to level 7 and to get clan backup benefits from two ruins.

5. How to get Help from the Guardian Dragon

Summoning a dragon during combat is one of the most interesting gameplay features of Mobile Royale. To summon the guardian dragon during combat, select a skill by tapping the dragon icon. You can set up army, select dragon skill and heroes when the battle begins. Choose wisely! While fighting, tap the skill and the dragon will attack your enemies, eliminating half of the troops in no time.

To get a dragon skill, you will have to unlock a “dragonstance”. To do this, you will need 10 elemshards of a particular type. You can get shards as rewards when you upgrade the castle. Once you collect 10 shards of a certain type, you will unlock several new perks, which also includes a dragon skill. For example: When you collect 10 Dragon Light shards, you unlock a new stance called “Light” and get the following bonuses:

Primal judgement skill that deals 10% damage to enemies, with a chance to decrease the DEF of enemy infantry heroes by 10%. You will have to select this skill by tapping the dragon icon before the battle begins. Besides unlocking a skill, you will also unlock several passive skill bonuses, such as increase in research speed by 10 percent and increase in key stats of clan backups by 10 percent. Keep unlocking new stances using different types of elemshards to unlock more deadly dragon skills.

Diplomacy unlocks when you complete the Kingsdor campaign chapter. Once unlocked, tap the notice board – a floating scroll icon outside the castle gates to access diplomacy requests. 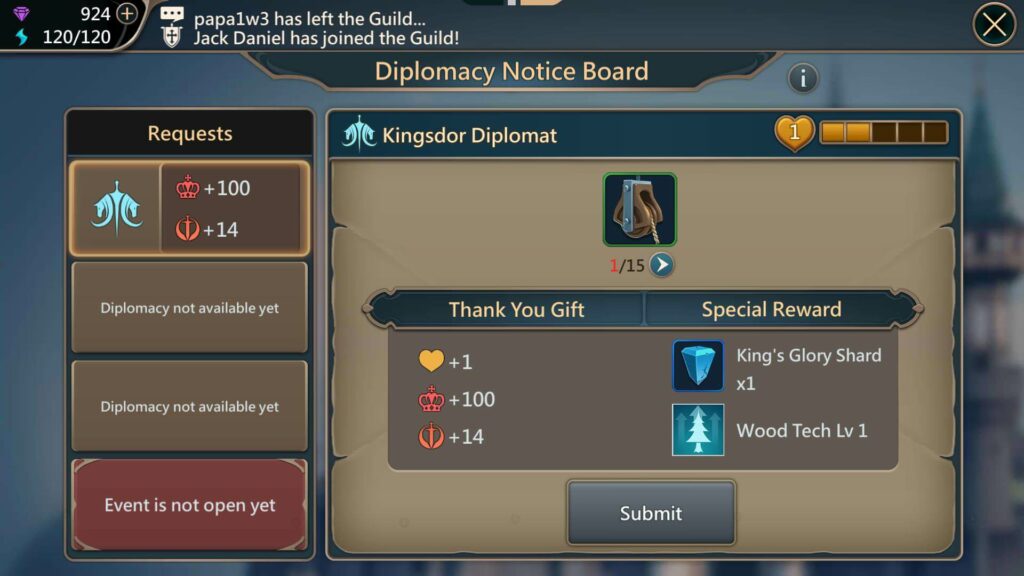 On the diplomacy page, tap the blue button below the pulley and you will be taken to the trading page where you can request this item from a clan.

Once you join a guild, it’s time to make use of your brigades to hunt special monsters on the world map. You will get a chance to earn shields boosts and speedups, although it’s not guaranteed. However, you will definitely get shards which will help you unlock monster ruins. When you place a monster ruin, you will get boost in stats such as increase in DMG to a certain monster type based on the monster ruin you have placed on your kingdom. For example, hunting the “Ifrit” (fiend monster) will let you earn Horned Alter shard, which will unlock the Fiend Ruins at the Arcane Sanctum. Now you will get damage boosts whenever you battle a fiend monster type.

Tap the world map icon and scan the map for monsters. Tap a monster and then tap the “hunt” button. Now choose your army by pressing the “Quick Select” button. This will automatically choose the right brigades for your monster hunts. Tap OK. Your army will automatically march towards the monster, kill it and bring home rewards such as crafting items, resources and shards.

8. Help Guild Members to Get Coins

Like most mobile massively multiplayer online strategy games, Mobile Royale also lets you join a guild to get more benefits. You should join a guild as soon as it’s available. Make sure you join an open guild and not the one that requires you to apply for joining. Your application may get rejected if you don’t meet the guild owner’s requirements. 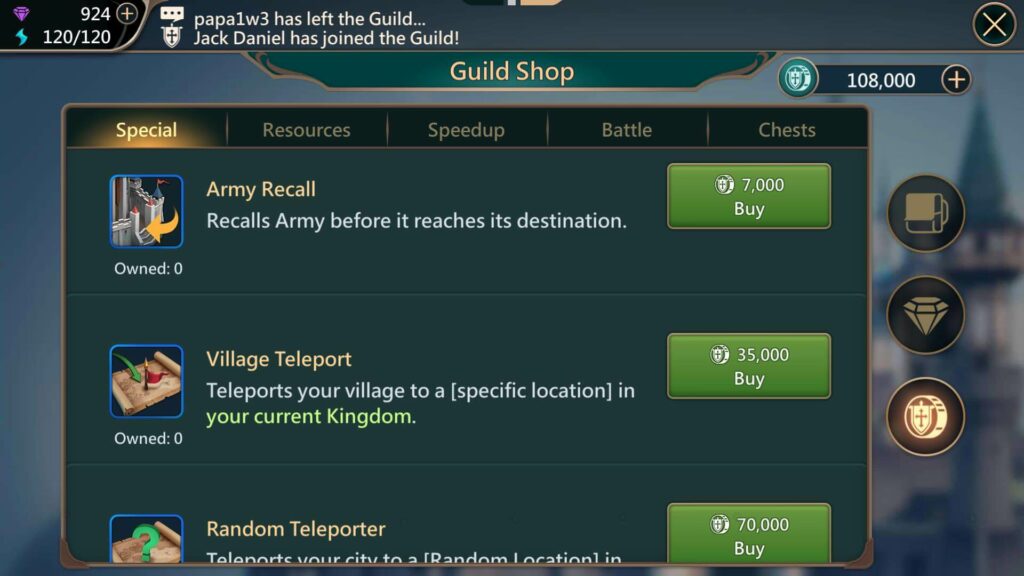 There are several benefits of joining a guild. One big advantage is that you can get “guild helps” to speed up your city development. It takes time to build or upgrade a building, and by joining a guild you reduce building upgrade times by tapping the handshake icon. Your guild members will help you speed up progress.

You can also help your fellow guild members by tapping the handshake icon on the lower-right corner of the screen. Tap it and then tap the “Help All” button to speed up progress of all guild members. When you do this, you get guild coins. They can be used to purchase speed-ups, resources, battle boosts and chests. The daily coin limit is 100,000. Limit resets every day, so the amount you have earned will be lost once it resets. Start using guild coins to purchase resources and items when you have earned over 50,000 coins.