Nexon’s Marvel Battle Lines delivers a refreshing take on the popular Tic-Tac-Toe game. Gameplay is very addictive once you know how to deal battle line attacks against your opponent. The game features your favorite heroes and villains from the Marvel universe, including Guardians of the Galaxy characters, Asgardians, Agents of S.H.I.E.L.D and the Avengers. 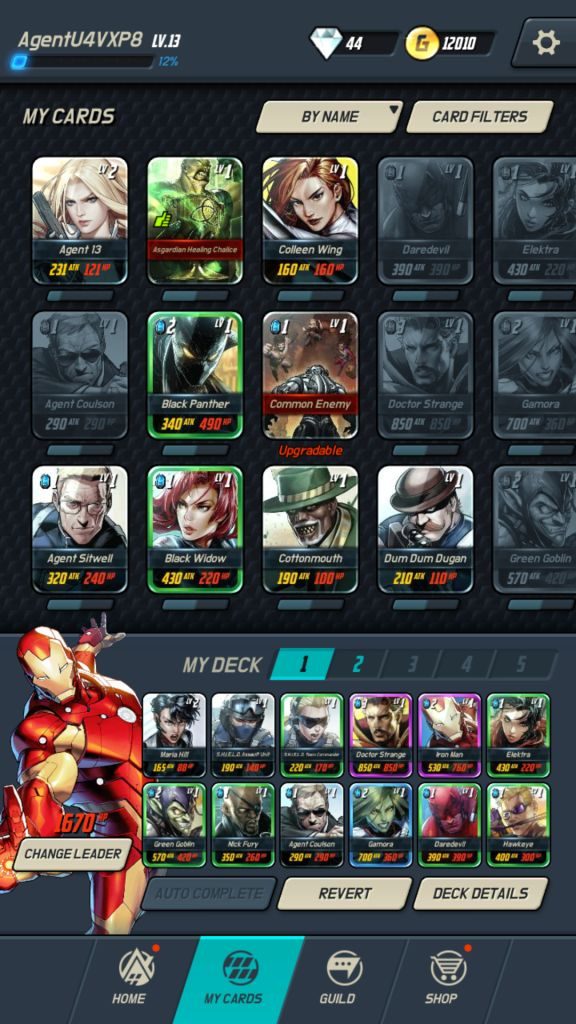 You will have to collect character cards, create a deck or cards and deploy each card on a 4×3 battle grid when battling opponents. You will have to drag a card to a tile to capture it and form a battle line of three cards placed horizontally/diagonally or 4 cards placed in a straight line to attack your opponent. Both you and your opponent will try their best to stop the other player from forming a battle line and here attack cards will play a big role. They can be used to break a possible battle line. You will need a good deck of cards containing a combination of no cost and attack cards and so you must have lots of character cards to create formidable decks.

You will get a set of twelve cards when you complete the “S.H.I.E.L.D.’s Training” mode, a tutorial mode that explains the bare basics of Marvel Battle Lines. Called the “Supply Card”, this pack contains several zero cost agents of S.H.I.E.L.D. cards and a few hero cards, such as Hawkeye. 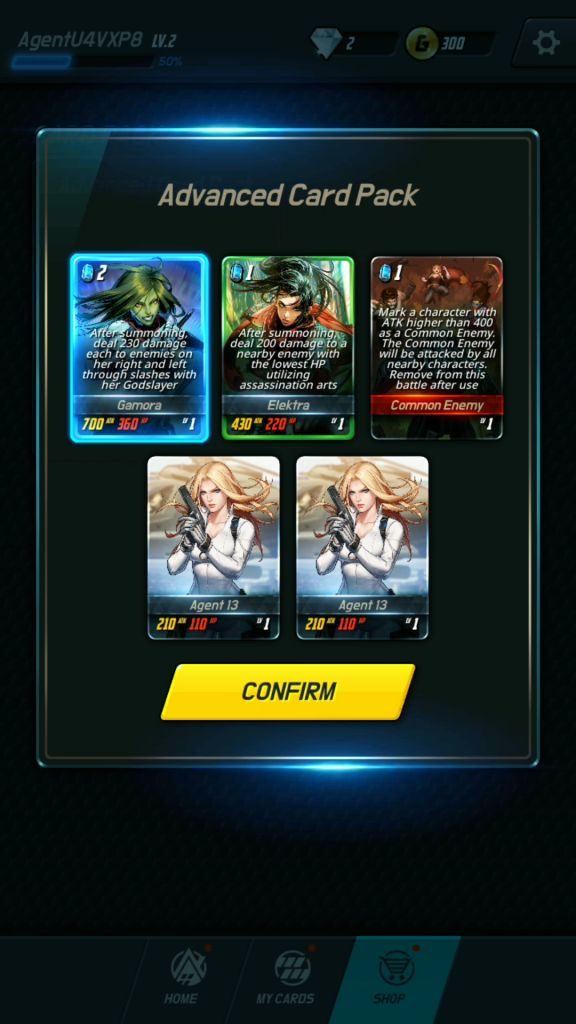 When the training ends, you will receive an advanced card pack prepared by S.H.I.E.L.D. Tap the shop button to claim it. My pack contained Elektra and Gamora cards, a support card and two agent cards. All cards can be used to make your own starter deck, but there several more to collect and this beginner-level guide will show you how:

Finish a level under “Campaign Mode” and you might get a card. Check the “possible rewards” section before pressing the start button to find out what cards you will be receiving on winning a mission. Make sure you take less damage and eliminate your enemy as soon as possible to claim all possible rewards. Don’t miss the match against Nick Fury (campaign stage 1-3) to get his special card. You can replay a campaign mission, but you won’t receive any rewards. You can play the same mission again to practice your battle line strategy.

Finish Event Stages to Get Characters

Keep an eye on special event stages. The event portal will let you track on-going events. You can find this portal on your home screen. Touch the portal to get more info on present events. The current Halloween event stage grants a Green Goblin card or a pumpkin bomb card to players who clear the fourth stage of the event. 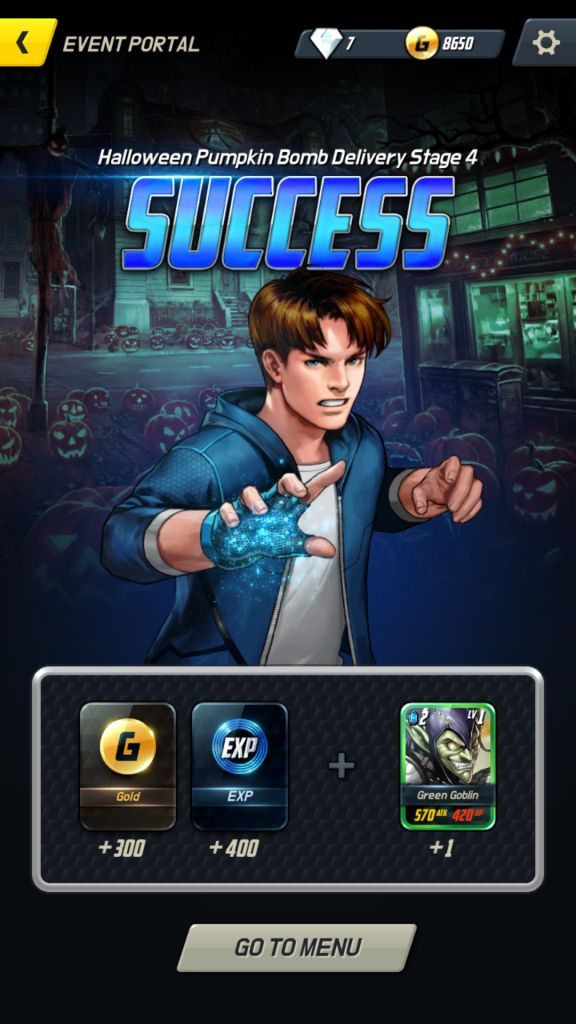 You will have to defeat Sandman, Rhino, Shocker and finally the Green Goblin to get your rewards. You will also get a card when you defeat Rhino. You can replay the Halloween event daily until it ends to get more rewards. However, you might not get another Green Goblin or pumpkin bomb card if you have already got one from this event. You will still receive a random card if you replay and win the Rhino mission.

Pay Attention to Other Events

Besides event stages, you will also find several other events, such as the level up event and the “S.H.I.E.L.D. Training program”. Such events usually run for several days. For example, the current level up event will run for 7 days and award cards when you reach certain levels. So if you reach level 20 before the event ends, you will receive 2000 gold and 2 cards. You can easily reach level 10 before the 7-day period is over to get 3 cards and 1000 gold.

Don’t forget to complete the 7 Day Check-in Challenge to get a rare Black Spider-Man leader. In Marvel: Battle Lines, a leader is different from a card and can be changed under “change leader” on your “My Cards” section. You get battle perks when you choose a new leader. For example, selecting Iron Man as your leader will give you 400 additional HP. Plus you will see an increase in the amount of cosmic fragments on the battlefield by 1 if you own 4 or more cosmic fragments on every turn.

PvP arena is the best place to get single cards in every battle. Tap “Arena” and then tap “Start Battle”. Fighting opponents in Arena tier 1 is very easy and you can easily win all battles. The players in tier 1 are probably AI as they are very easy to defeat. 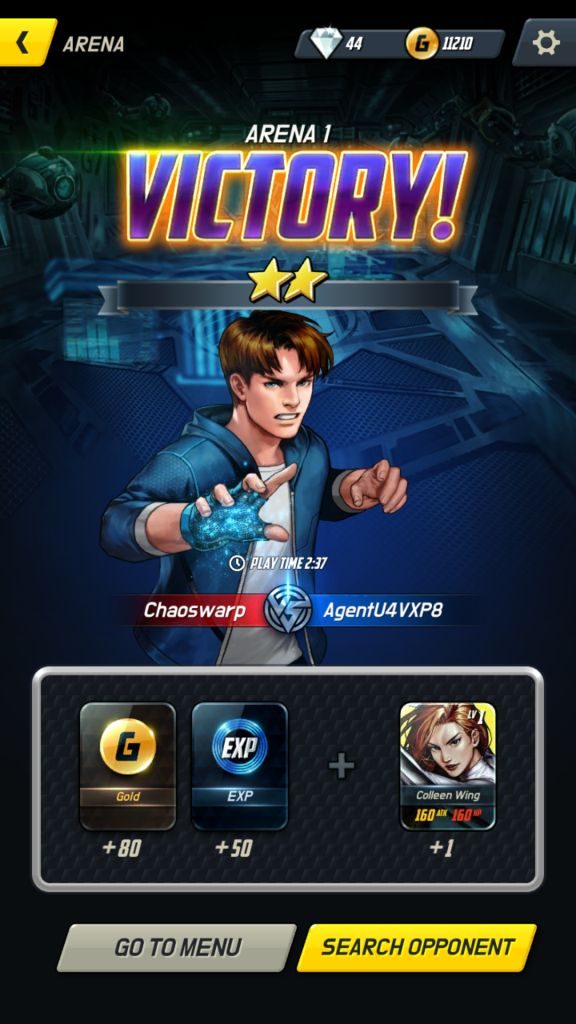 You will get a card on winning each arena battle. You will also get a promotion reward containing a card and gold when you complete tier 1. Upon reaching arena tier 2, you will face a tough challenge as human opponents will be harder to beat. Make sure you switch to a new leader (if you have one) after reaching tier 2.

Purchase the Best Cards using Gold Before the Offer Vanishes

The gold you receive as rewards can be put to good use. You can use gold to purchase cards from the shop. Scroll down until you reach “Daily Offer” and you will find several cool card offers at a good price. Since you will keep earning gold from campaign levels, daily missions, monthly and weekly login rewards, event rewards etc., you will amass lots of gold in a short period of time. 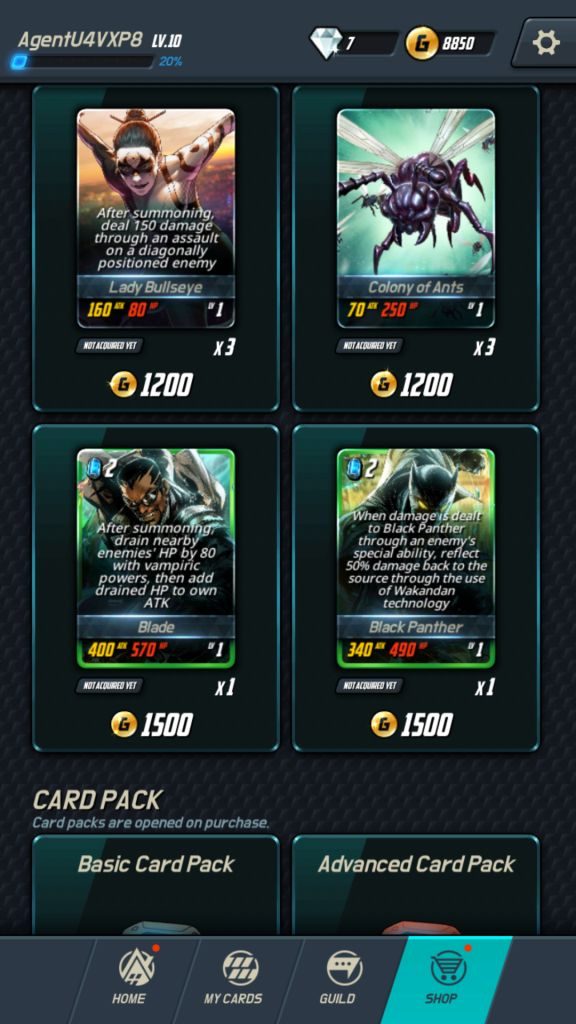 The cost of a single card isn’t too much and can add some value to your collection. I quickly grabbed a Black Panther card for 1500 gold before it vanished. Yes, the current card offers are replaced by new offers from time to time, so make sure you purchase the best ones before they are replaced by new cards. Also, pay attention to the special ability of a card before making a purchase.

Get Free Card Packs Every Day

You will also receive a single card pack from time to time. It’s available in the shop menu, under “Card Pack”. There’s a cooldown time of 60 minutes to get a free new pack. You can spend 400 gold to get a card if you don’t want to wait. There is a high chance of receiving a common card and a 10 percent chance of getting an uncommon card from the free pack.

Complete Special Ops Missions to Get Points and Cards

As you play more and more campaign missions, you will reach new levels and unlock more game modes, such as “Special Ops” and “Trials Simulation”. In a Special Ops mission, there will be certain objectives such as defeating the opponent in X number of turns, defeating him in 1 or fewer battle line attacks and avoiding attacks. There are higher chances of receiving all “possible rewards” in a special ops mission if you complete all three objectives to win a mission. 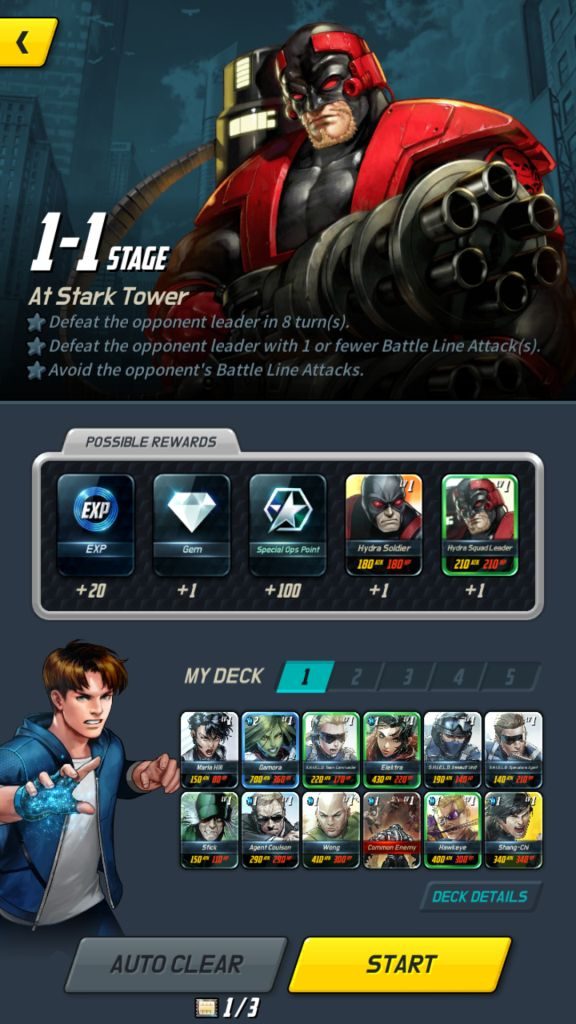 Special ops missions are not easy. You can lose lots of HP if your AI opponent attacks. Don’t allow your opponent to deploy three cards horizontally and diagonally and get the first strike to defeat him. Deploy cards that require cosmic fragments to attack enemy cards and quickly make a horizontal battle line to attack the opponent leader. Opponents are not that tough in the initial stages and you can easily defeat them on your first attack.

On winning a special ops mission, you will not only receive cards, but also special ops points. You can then redeem points for a card or card pack. You will need at least 200 points to purchase a card. Keep accumulating points to get better cards. For example, you can acquire a Doctor Octopus card for 750 special ops points. Make sure you get those points quickly as the current offer will be replaced by a new one every few hours. The special ops cards section can be found in Shop.

You can also play “Trials Simulation” to get Trial Points. You can then use these points to purchase cards from the shop. The Trials simulation card offers are available just below the special ops offers, so you will have to scroll down a bit to reach them. You will need to earn a minimum 200 trial points to get a single card pack or a card. You can save points to get a higher rarity card if you spend 750 or 3750 points.

Keep playing the game every day to receive daily login rewards and get a monthly reward card pack. Under the monthly rewards section, you will receive gold, gems and other items on a daily basis. Log in every day and get a bonus card pack on the 28th day. There’s also a special “weekly” reward. Claim gold each day to receive a basic card pack on the 7th day. Tap the “Login Rewards” section in your home screen to get more information. 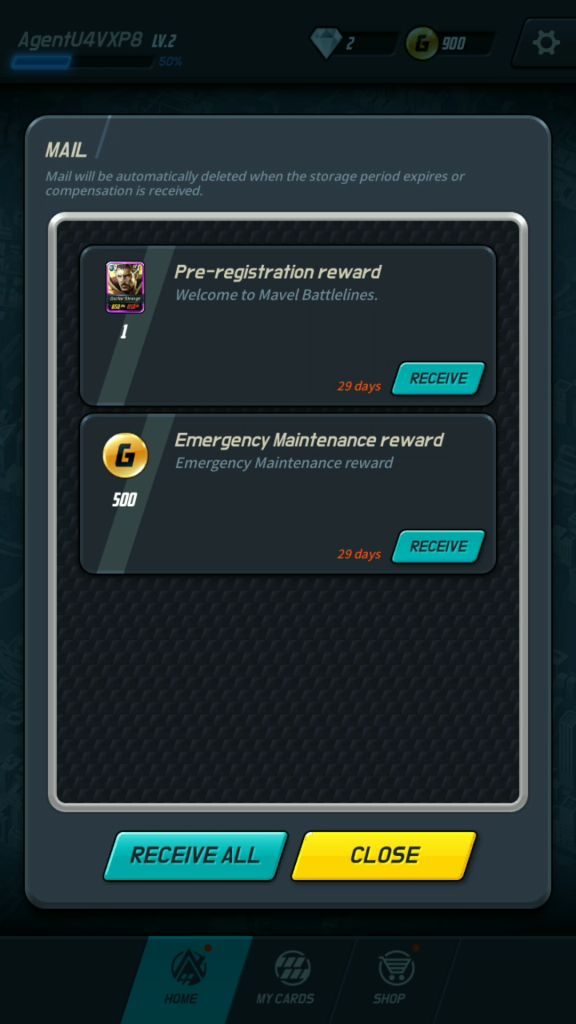 Pre-registered for Marvel: Battle Lines? You will receive a special pre-registration reward. I received a Doctor Strange card. To get yours, tap “Mail” to collect your reward, which would be a special hero card. Make sure you claim your reward before the storage period expires. The storage period is usually 28 or 29 days.