Managing a team of your favorite cartoon characters and seeing them in action can be so much fun. This can be experienced in Scopely’s new RPG called Looney Tunes World of Mayhem. A tactical role-playing game, World of Mayhem lets you build your own toon squad. You will collect your favorite characters such as Bugs Bunny, Road Runner, Tweety, Porky Pig, Daffy Duck and lots and lots of classic toons you grew up watching on TV! You can then create your own team of toons and fight enemies in engaging and often very cartoonish turn-based tactical battles. 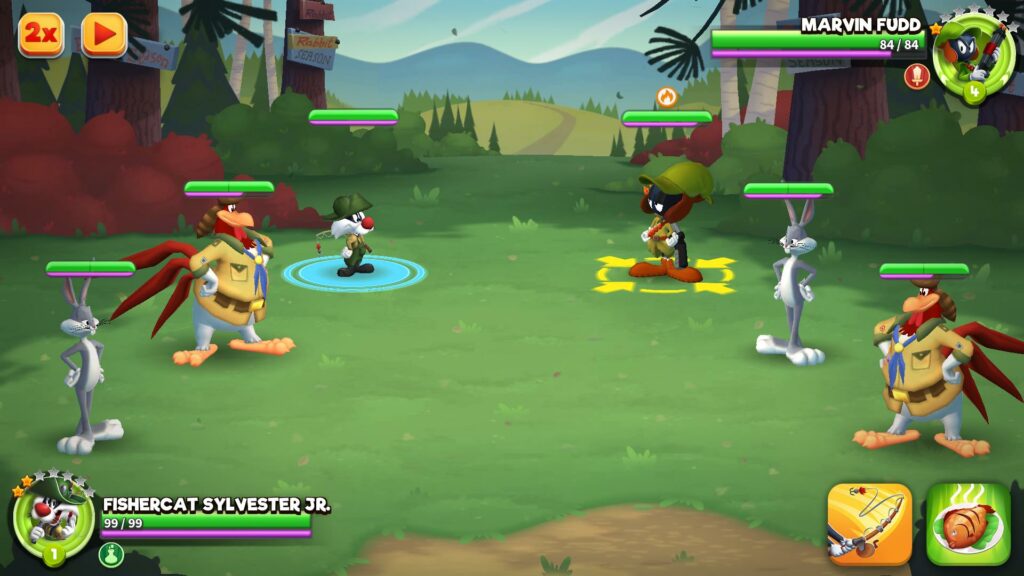 Each character also has a unique new avatar. The new avatar boasts new skills which you can put to test against human and AI opponents. You will have to collect toon pieces to unlock these avatars. The game also lets you build and manage a “toon world”. You will be able to construct houses of your favorite cartoon characters and assign tasks to toons to get various rewards, such as pieces, tune-up items and gold. If you want to win campaign levels, steal Acme crates from human opponents and build the best toon squad, just follow these useful tips, hints and strategies.

As you progress, you will come across stronger opponents. To beat them you will need upgraded characters. When you level up a toon, you not only increase his/her stats such as attack, defense, health and speed, but also boost the total “team power”. You have a higher chance of winning a campaign battle if your team power’s total is more than opponent’s team power. 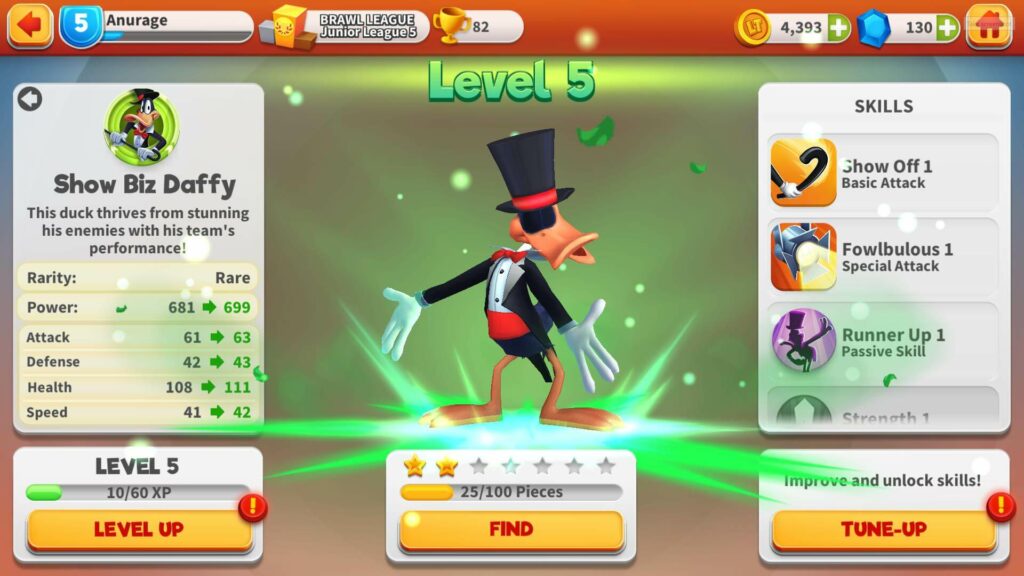 To level up a character, tap “Toon” on the bottom of your home screen. Next, tap a character’s portrait. On the character’s page, tap the “level-up” which is located on the bottom of the page. Now tap an “XP Potion”. You will notice the level-up bar filling up. You may have to tap the potion again if you want the level bar to fill up completely. When it fills up, a character reaches a new level. You will also have to spend a few coins to level up a toon. When a toon reaches a new level, his stats page shows a boost in all attributes, such as attack, health and power.

You can earn XP potions from campaign levels. You can also replay all completed levels to farm potions and other rewards.

The game puts a lot of emphasis on “relationship” or “friendship”, which I will explain later. While having an ally is a key strategy to win a battle, it’s very important to have the right type of characters in your team. By “right type”, I mean class, which you can see in every toon’s page. Just tap “Toons” and then tap a character’s portrait to find his class. Some toons belong to the “attacker” class, others belong to the “defender” class and then there are “healer” classes that heal all units in your team.

I am sure you would be paying attention to relationships between characters and selecting those toons that have a certain “friendship” or affinity to take advantage of stats boost or battle advantages, but don’t forget to take a healer and defender unit with you to battle. This combo can make it easier for you to defeat all enemies in a battle. A defender’s taunt skill will force enemies to attack only him. As he keeps enemies busy, you will have to use your attacker’s best skills to defeat enemies faster and the healers healing skill to regain HP of all toons. A defender usually has high health, so you don’t have to worry about losing him sooner. And even if his health reduces to 50 percent or less, you have the healer’s skill. Use it to regain defender’s health. Make the most of the defender-healer combo to win campaign battles.

3. Make the Most of Relationships

Looney Tunes World of Mayhem’s “relationship” is an interesting gameplay feature. You should take full advantage of it if you want to defeat tougher opponents. Each character has a relationship or friendship with another character and having both these characters in the same team unlocks relationship bonuses that will help you vanquish enemies in a turn-based battle. 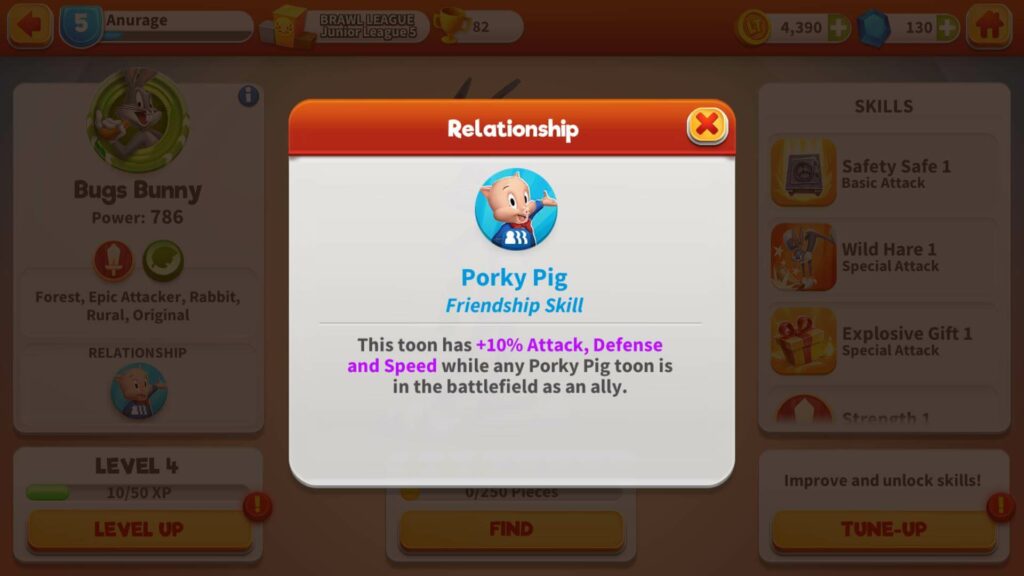 To check character relationships, tap “toons” and then tap a character’s profile picture. Under his stats page, which is on the left-hand side, you will see a section called “relationship”. Under this, you will notice a picture of another toon. Now tap it to get more info about this relationship. Having the same toon as an ally in battle, you will gain certain buffs or stats boost. For example: In Bugs Bunny’s page, under “relationship” you will see Porky Pig’s portrait. Tap it. If you have any version of Porky Pig in your team along with the original Bugs Bunny, the latter will gain a +10 percent attack, defense and speed. If you have “Fishercat Sylvester Junior” in your team, then having any Sylvester toon as an ally will grant Fishercat Sylvester Junior a 10 percent boost in Defense, Speed and Attack.

4. How to Steal Crates

Acme Crates contain cool rewards such as tune-up ingredients, which is used to unlock a toon’s skill, and gold. You get your first crate at player level 3. Acme delivers crates periodically, so you might want to check out the time remaining to deliver the next crate. Just tap the portal under “banks”.

If you are impatient like me and hate waiting times, then all you have to do is battle random players in asynchronous PvP battles to steal their crate. To do this, tap the hammer icon under “brawl” and choose a human opponent to attack. You can select up to 4 characters before battle.

Make sure you select an opponent with a team power lower than yours. You can see each player’s team power just above the attack button. Select your best characters to battle a player. Choose a healer, a defender and two strong attackers. Set up auto-battle if you have a stronger team and let the AI steal the crate for you by choosing the right actions against your opponent’s team.

If you thought that you can open a stolen crate instantly, you are wrong. You will have to guard it for some time before it can be opened. You will have to “assign” your best toons to guard the crate. You may spend gems if you want to open the stolen crate instantly. When defending a crate, have a defender and your best character guard it. You don’t have to worry if you have assigned your strongest team, you can use the same team to battle opponents or play the campaign mode.

5. Attack Healers or Other Support Characters

You should have a proper attack plan when you face enemies. Your priority should be to defeat the most dangerous enemy before attacking others. In most situations, support characters, such as healers can be a big problem as they tend to heal others and themselves regularly, making is harder to defeat opponents quickly. You should target a healer or any other support character to have an edge in battle.

To know a character’s abilities and whether he is a healer or not, go to “Toons”, tap a character profile and then tap his stats card on the left to flip it. Read the description on the toon’s card to know more about his role and how much damage he/she can deal. You may have to memorize each locked or unlocked character roles before playing the campaign level. You can check each toon’s strengths and abilities, even those that haven’t been unlocked.

6. Farm Rewards with the help of Auto-Win

You get three stars in a campaign level when you win it without losing a toon. Once you earn three stars, you unlock “auto-win”. With auto win you can farm rewards without actually replaying a level. Just spend 5 energy and collect rewards mentioned in the “possible rewards” section of a level. Make sure you win all campaign levels and earn three stars in every level to enable auto-win if you are serious about farming rewards without putting any effort. 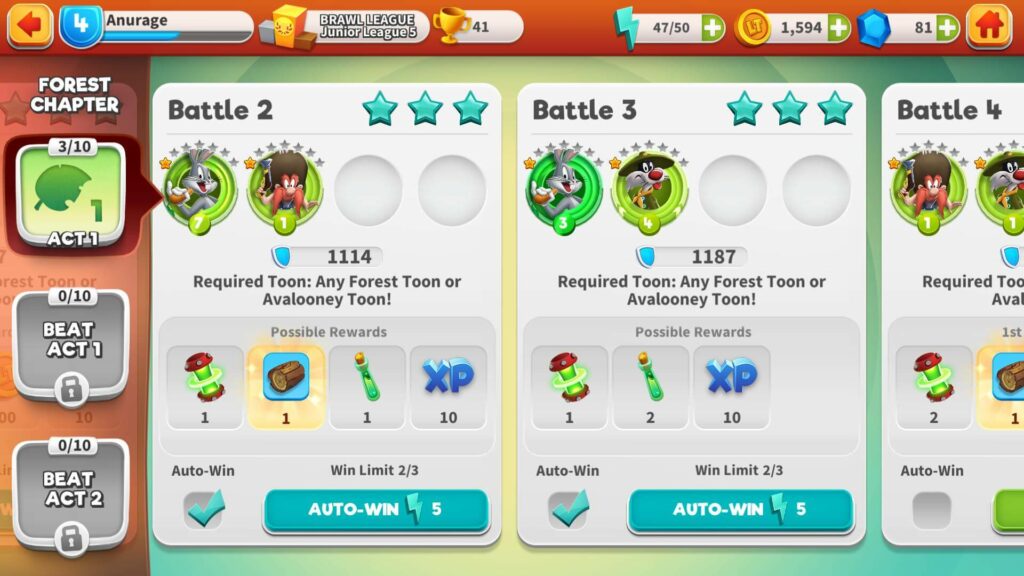 There’s, however, a limit imposed on the number of auto-win tries. You will get to use this feature only three times and there will be a cooldown time of 9-10 hours before you can start auto-winning a level again.

7. How to Get Wood Logs to upgrade Toon Buildings

Looney Tunes World of Mayhem lets you build and manage your own world of toons. Every time you unlock a new toon, you will be able to construct a house for him. Tap “world” and access a wonderful 3D world where you can build shelters for your characters and assign special tasks to them to get gold, tune-up items and even toon pieces.

If you want better rewards, then you will have to upgrade a toon’s house. To upgrade, you will need gold and wood logs. Just tap a home or a toon and then tap “upgrade”.

You can get wood logs from certain campaign levels, such as Forest chapter – battle 2 and battle 4. you will get more opportunities to get wood logs and other items required to upgrade a toon’s house as you progress. You can replay the same level again and again to farm logs. Don’t forget to tap auto-win to get rewards automatically if you want to get rewards without playing a level.

”Tune-Up” improves toons by unlocking new skills and boosting their existing passive or active skill. Tuning up a character is the best way to unlock new passive or active skills. You will need tune-up materials such as dynamite or anvil to improve or unlock a toon’s skill. You can get these materials from acme crates and as rewards from certain toon tasks performed at the “world”. Tap world and then tap a toon to perform a task. When the task finishes, you will get gold and materials such as anvil and dynamite. You will need to reach certain levels displayed in the tune-up page to unlock a character’s new skill.

That’s all folks! I hope you will find this guide useful in your Looney Tunes World of Mayhem adventure. Please leave a comment if you have your own tips and strategies or if you need help.

Is there a pattern for Ralph wolf's card game?

One of the better guides I have read, the only thing I would regularly disagree with is killing healers first. A good team consists of 1-2 tanks 1-2 DPS and 1 Healer. If you have the 2 DPS option you can usually take out one of the opponents DPS before they have a chance to heal or put up a taunt giving you a 4 to 3 advantage right off the bat.