In King’s Legend of Solgard, you will have to collect sun gems to get new creatures and train them. For example, you will need 60 purple Mire Wyrm sun gems to unlock him.

You can also use gems to enhance stats by filling empty slots underneath a creature. Just tap “collection” and then tap a creature. You will have to use duplicate gems of that creature to fill a slot. So if you want to improve Grimchop’s Strength, you will have to collect a particular number of green Grimchop gems. Once you collect the required number of gems, head straight to his page and use them to augment his “strength” stats. You will need both gems and gold to enhance stats of a creature. Fill all three gem slots of creature to rank him up and unlock special abilities that deal additional damage to enemies during battle.

You will need lots of sun gems if you want to collect all creatures in Legend of Solgard. While you can spend diamonds (premium currency) to open chests and get gems, there are several ways to get them for free. Learn how to acquire them with the help of this basic guide:

To get gems, you will need to find them first. Thankfully, there is a way to get info about the location of sun gems for a particular unlockable creature:

Tap “Collection” on the bottom of the screen. Next, tap a creature piece that hasn’t been unlocked yet. On the creature’s page, tap the tiny magnifying glass icon on the lower-right corner to know where to find gems to unlock him. The new window will show a list of levels where you can battle enemies and collect gems. Just tap “Go” to battle enemies in that level and get your rewards. 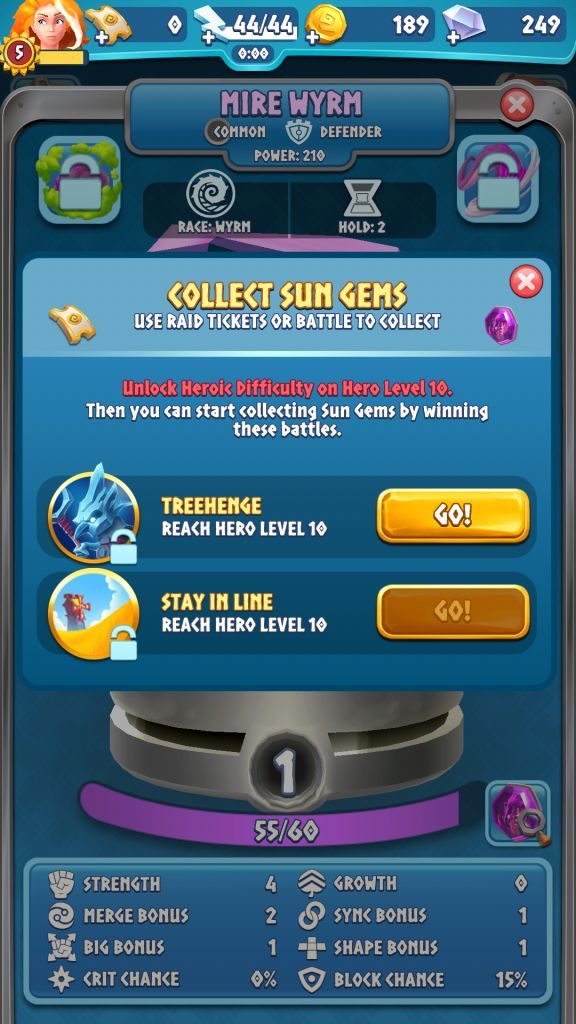 You can use raid tickets if you don’t want to fight them again and just want the rewards. However, it’s not easy to get raid tickets. You can, however, purchase them using diamonds. Make sure you have reached hero level 10 to unlock “Heroic Difficulty” if you want to replay previous levels to grind for gems.

You can also find a list of “discoverable creatures” in a region under “campaign”. Tap the tiny “i” beside the region name in your campaign map to know which creatures can be acquired in that region. 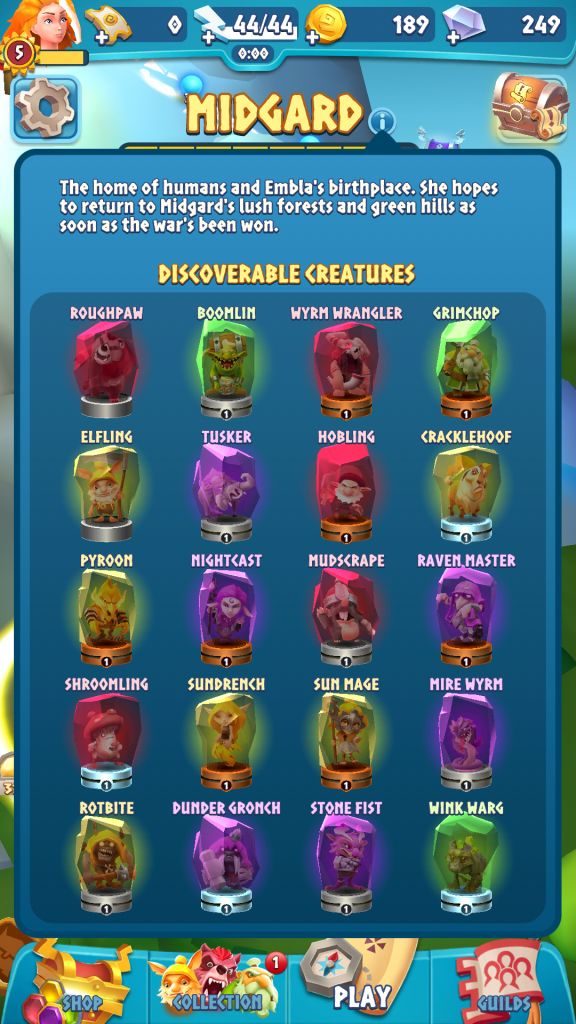 You will find gems for all creatures in the list if you replay older battles. Get to hero level 10 to unlock heroic difficulty if you want to get additional sun gems as rewards for replaying previous battles.

You will unlock this game mode when you reach hero level 5. “Treasure caves” is a bonus mode that lets you harvest sun gems by playing special battles containing “urns”. In this game mode, there are no enemies but harmless-looking urns and you will get 7 turns to destroy them to get gems and ability dust. Line up creatures to combine them and break urns to get gems and other rewards. 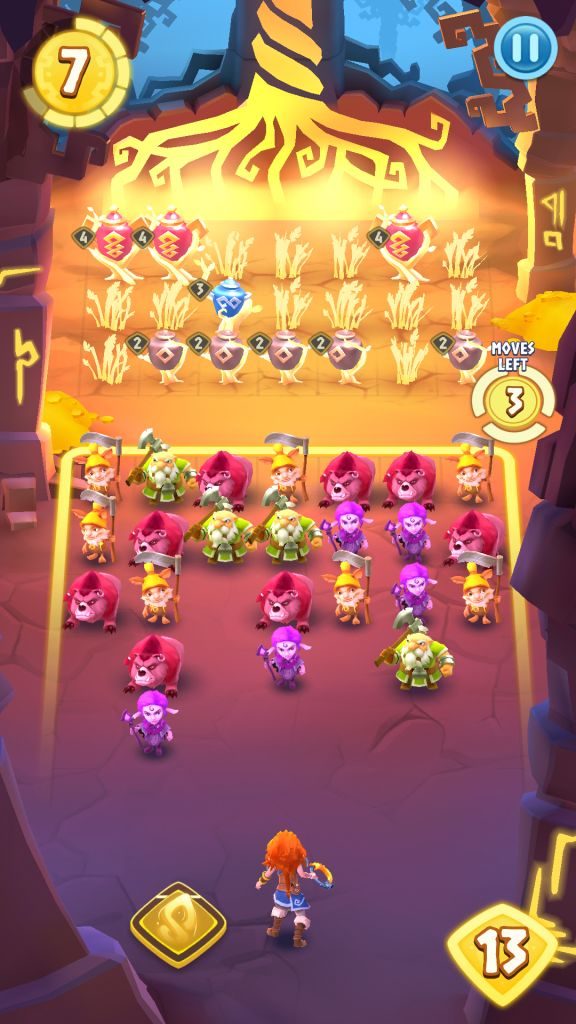 Once 7 turns are finished, you will have to wait for 4 hours to start playing again. After the 4-hour wait is over, you will get seven more turns to play a treasure cave level and harvest gems. You will get these turns twice a day. Make the most of them to break as many urns as you want. Just make sure you don’t line up gems horizontally to make barricades. You will have to attack urns so you should consider lining up more and more creatures vertically to destroy and get gems from them.

There are five “harvests” (levels) in a particular cave. Complete all of them to advance to the next cave where you will receive more treasures, including better sun gems. To complete a harvest, you will have to collect a certain number of gems. For example, to complete the “Twinkling Harvest” in Iron caves, you will have to gather 45 sun gems by battling urns. When you finish collecting the required gems, you will not only advance to the next harvest, but also unlock a rare chest that contains gems (including rare sun gems), gold and ability dust. When you complete the final harvest in a cave, you will receive a large epic chest that contains at least 20 rare gems and 6 epic gems. You will also get over 500 gold and lots of ability dust.

Before attempting a harvest, check what are the types of urns you will get in a level and their value. For example, in Twinkling Harvest, you will find three urn types as shown in the screenshot below: 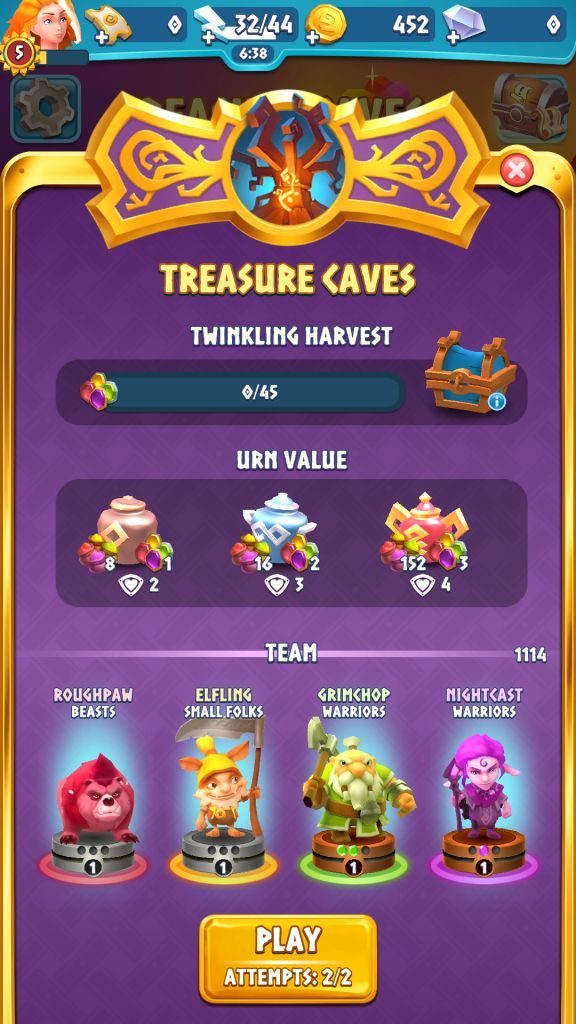 Notice their HP and the number of gems and ability dust they contain.

3. Get ‘em from Free Chests

A free chest is available every 2 hours. You will have to wait for four hours to get two chests. Free chests also contain sun gems and other rewards.

The higher the level of a chest, the more rewards you will receive. You can get them from “Shop”.

4. Complete Missions to Get a Quest Chest 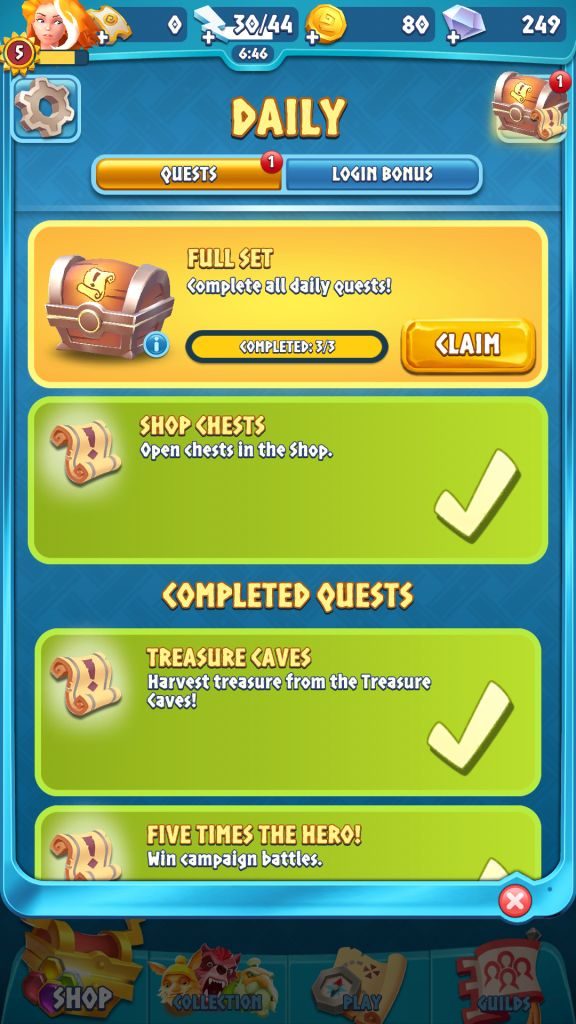 To get this chest, you will have to complete three in-game quests. Tap the chest icon on the upper-right corner of the screen to find out a list of quests and complete them one by one to unlock the chest. Before opening one, check the chest level. The higher the chest level, the higher your rewards.

You will receive login bonuses when you come back every day to play Legend of Solgard. These bonuses include gems and gold. You will also receive loyalty points along with gold or gems. These heart-shaped points can be claimed on certain days so pay attention to the bonus chart to find out on which days you will get them. Play the game daily to collect points and reach higher loyalty levels to increase the number of rewards per day.

6. Look out for Chests on a Campaign Map

These chests appear randomly between levels on your campaign map. You will have to reach the chest to acquire it. These chests usually contain gems and gold. You will receive an epic chest when you reach the main boss level of a campaign. Epic chests contain rare and epic sun gems with a possibility of getting a legendary gem.

7. Finish Battles to Get Guaranteed Rewards

Tip: You can also buy gems using gold. Check the daily deals section in the shop menu to look for gem offers.