The King of Fighters AllStar is Netmarble’s gift to all KOF fans across the world. With stunning graphics, extreme combos and simple controls, the game offers intense fights that will keep you glued to your smartphone screen for hours.

Go down memory lane by playing the entire KOF series from the King of Fighters ‘94 to KOF XIV. You will be collecting more than two hundred original characters and form the most powerful teams, forge relations and unlock cores to make them stronger than ever.

The story mode lets you fight all bosses from the series plus there are various other game modes, such as Arena, league matches, event quests and many more! With the help of this KOF AllStar guide, you will learn new tips, tricks and strategies that will help you choose the right team, fight deadly bosses, use supporters and strikers at the right time and unlock cores to become the ultimate champion.

Ahead of the biggest KOF tournament, you will have to select one of the three best champions. They possess unique special moves, have super effective leader skills and great stats. Your ultimate fighter team is incomplete without these fighters:

Often referred to as the “invincible dragon”, Ryo has high HP and DEF stats. His leader skill increases yellow element fighters’ ATK and DEF by 10 percent. His skills are:

Terry Bogard has the most balanced stats of all starter characters in KOF AllStar. The free-spirited wandering wolf has two basic skills:

Every fighter has his own strengths. Terry Bogard’s stats (HP, ATK DEF) is more balanced whereas Ryo Sakazaki’s skill cool time is the lowest amongst all three. Choose your character as per your battle requirements. The fighter you will select will be your default leader, although you can change your leader anytime in the View Fighters page

How to Kick and Punch Multiple Enemies

In story mode, you will be fighting a lot of enemies before the boss round. While fighting, don’t be surrounded by enemies. Your fighter should NOT be in the middle, flanked by enemies. He will take damage from both sides.

Move away from them by tapping the dodge button so that enemies will either be on the left or right side and then start throwing punches and kicks.

One big advantage of moving to one side is that you will be kicking multiple enemies on the other side at once and pulling off combos easily. When you get this opportunity, make full use of your character’s skills to inflict major damage and eliminate them.

Tag a Fighter with a Stronger Element to Fight Opponents

Once you select a team of fighter, you can tag a fighter any time during combat by tapping his/her portrait on the top-right corner of the screen.

When you tag a fighter, he/she appears instantly, and their first move deals high damage to the enemy.

Whether fighters or enemies, all KOF AllStar characters have a special color-coded element. There are five elements and each element are stronger than the other:

When tagging fighters, you should keep elemental advantage in mind. If your current fighter’s element is weaker than his opponents, he will deal less damage.  Tag one of the fighter’s whose element is stronger to inflict more damage to get rid of enemies before they hit you.

Note: When selecting your team, pay attention to the arrows on character portraits. These arrows hint at possible stronger/weaker enemies you will be confronting during battle. If there is a downward pointing arrow on a certain fighter portrait, try not to include him to your team or choose more fighters with upward pointing arrows.

Dodge When you See a Boss’s Special Attack Range

Every boss has his own special attack which deals great damage to your fighter. Before he unleashes his attack, its range is displayed on the screen for a few seconds. His special attack range is red in color.

Tap the purple dodge button when you see his attack range to avoid being attacked by him. The dodge button can also be useful when your fighter is surrounded by multiple enemies.

Summon a Striker During Combat

Before a battle begins, you will select a team of fighters as well as “Strikers”.

Strikers will accompany your fighters to beat up baddies. Strikers act as supporters, but they appear for a second and only unleash their striker skill to deal massive damage to enemies.

Each character has a special “striker” skill, which activates automatically when you select him/her as your striker. Just summon them during combat to watch their skills in action. When you tap on the striker’s portrait on the top-right corner of the screen, he unleashes his skill for a few seconds and then vanishes.

You can summon a striker again after his/her cooldown period is over.

Fighters that are not in the team can be selected as “strikers”. For each fighter, you can choose a corresponding striker. If there are three fighters in your team, you can select up to three strikers for each team member. If a character dies during a fight, you can’t use his striker. But you can summon the next fighter’s striker to fight enemies.

Because they appear for a few seconds and usually have a higher cooldown time, strikers should be used when you are facing a tougher enemy or during boss round. Tag each fighter and the tap his corresponding striker to deal double damage to enemy.

Start recruiting strikers for each team member as soon as you have collected 6 or more characters. Having more characters will make it easy for you to choose a separate set of fighters and strikers.

Power up Fighters to Increase Stats and CP

You can “power up” team members using stats boost capsules and EXP capsules. These capsules can be obtained when you win a story battle, from the power up dungeon and from certain event quests, such as the “score event”.

To power up a KOF character, tap the “Fighter” tab and then tap his/her portrait > level up tab. Use an EXP capsule under “materials” and then press the Enhance button. Choose multiple capsules of the same type by tapping on a capsule repeatedly. If you want to use three EXP capsules, tap the capsule 3 times.

Powering up fighters also increases your total team CP. When you level up a fighter, his CP increases, which also reflects in the overall CP. Make sure your team’s CP is higher than the recommended CP in a battle to increase the chances of winning.

How to Choose a Team Leader

Each character has a special “leader skill” that can be of immense help during battle as it augments fighter stats on certain conditions. These skills can increase ATK and other stats of certain fighters, boosts stats for every combo etc.

Your starter character will automatically be chosen as the team leader. You can change your team’s leader anytime in the fighter selection screen, just before a battle begins.

On the character selection screen in story mode, tap a fighter to open the “view fighters” screen and then tap each character on the top to deselect them. Now select them again. The first character you select will be chosen as the leader.

When forming a team, keep “team relation” effects in mind. This gameplay feature increases stats of all fighters in a team if a certain relation is established.

There are certain rules in The King of Fighters AllStar that kick off relation effects. For example: if you have all female characters in your team, then you will activate the “Women Fighters” Team relation effect that increases stats such as ATK and HP of all fighters by a certain percentage.

There’s an easy way to check each character’s relation with other and the resulting effect. Tap “fighter” button > character portrait and then tap the green “relation” button under “profile”.

There are lots of ways to earn rewards in The KOF AllStar. You can complete growth missions, finish achievements and events.

Tap the checklist icon on the top-right corner of your home screen to access a list of daily missions and achievements. Complete each mission to get rewards such as golds, AP (used to start a battle) and friendship points (used to summon a fighter). Complete achievements to gain rubies (for summoning fighters), golds and other rewards. Tap the “claim all” button to acquire all rewards.

Skills play a very big role during battles. As you progress, you will need better and higher-level skills to fight deadly enemies and tougher bosses.

If you want to unlock more skills, upgrade the existing ones or just give a big boost to your stats, you should unlock a fighter’s core. Each character has a unique core page. You can access this page from the “View Fighter” section.

There are a few conditions to unlock a core in The King of Fighters AllStar:

– Your fighter must reach a certain level.

To find core materials, go to a fighter’s core page, tap a core and then tap a material to know which power up dungeon stage drops that material.

Summon a Supporter During Boss Round

Supporters are more effective than strikers. Although you can only choose one supporter in a battle, he/she stays longer than a striker in the battle scene. Prior to a battle, you can choose a supporter from a list of characters.

Make sure you tap the “Auto-Select Recommended Supporter” to select the strongest supporter. Supporters are highly effective during boss rounds, so make sure you summon one when you are fighting an all-powerful boss. 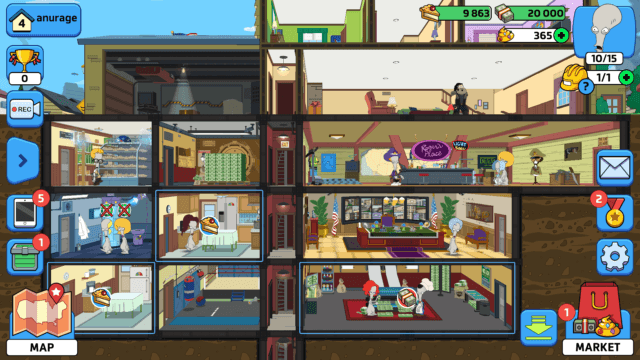 Next
The 10 Best Detective Games for Android
Click here to cancel reply.