After the huge success of Kleptocats, its sequel and Kleptodogs, Hyperbeard, along with TokyoPlay has launched a new puzzle game called KleptoCats Mystery Blast. It’s a color-matching game that allows players to tap on two or more blocks of the same color to remove them.

This game has a very unique board design. Developers have ditched the old boring square board and introduced a unique 3D cylindrical board that can be rotated from left to right and vice-versa. This special design makes gameplay more interesting, but levels can be challenging.

As you finish levels by completing various objectives, you will get cool gifts from your favorite kitty characters. You can see those gifts when you scroll the 3D map or under “Inventory” > “Scrapbook”. There are lots more to do in KleptoCats Mystery Blast and these beginner-level tips and tricks will help you complete more levels, create combinations and obtain great rewards:

Power-Ups and Their Uses

There are three main power-ups in KleptoBlast:

1. Kleptosnacks: This fish-shaped “whiskers patented” power-up can be created when there are 5-7 same colored blocks placed next to each other.

The blocks’ symbol automatically change to fish when they are aligned horizontally or vertically on the game board.

Tap one of those blocks to create the Kleptosnacks power-up and then tap the power-up again to activate it. Depending on its orientation, Kleptosnacks clears a row or column. Horizontal power-up clears an entire row and the vertical one clears a column.

2. Bomb: Create the powerful bomb by tapping on 8-10 blocks of the same color stacked next to each other. Now tap this power-up to clear surrounding blocks.

3. Zen Cat: When 11 or more blocks are placed next to each other, their symbol changes to the epic Zen cat.

The Zen cat power-up works exactly like the rainbow power up, but you don’t have to swap it with a block.

How to Create Combos

You can create a combo when two power-ups are placed side-by-side. Here’s a list of Kleptocats Mystery Blast combinations and the effect they create when you combine two power-ups:

1. Kleptosnacks Combo: Combining two kleptosnacks clears a row and column at the same time in a cross-shaped blast.

2. Kleptosnacks + Bomb: Combine a horizontal kleptosnacks with the bomb and clear three rows at the same time. A bomb combined with a vertical one clears three columns.

3. Kleptosnacks + Zen Cat: Combine this power-up with the Zen cat and all blocks of the Zen cat’s color will be turned into kleptosnacks. They will activate automatically clearing a lot of rows and columns at once.

4. Bomb Combo: The explosion radius will be larger, clearing a lot of blocks when this combination is activated.

5. Bomb + Zen Cat: Combine the bomb with the Zen cat and all blocks of the Zen cat’s color will be converted into bombs, automatically activate and explode one after the other.

You can try combining two Zen cats to create a spectacular effect and clear almost all blocks from the cylindrical board.

Beware of the Bandit Dog

Bandit dogs will enter Level 6 and will be quite a nuisance in future levels. These dogs have rotors attached to them and this helps to lift them up.

Your objective is to stop them from hovering to the top. Hit the bandits with falling blocks by matching two or more blocks above them. You can also use powerups such as the Kleptosnack if it’s in the same row or column where the dog is hovering.

Bandit dogs can be a big obstacle in a multi-objective level. It’s GAME OVER if you can’t stop a bandit from reaching the top of the board.

Cute kitties trapped in the board can be easily brought down with the help of a vertical Kleptosnack. Make sure the power-up is in the same column with the trapped cat.

Use Boosters for Tough Levels

There are a total of 4 boosters:

1. Guapo’s Paw: It removes a block. Tap on this booster and then tap on a block to remove it.

2. Rabano’s Surfboard: Tap this booster and then tap a block to clear the entire horizontal line of blocks. Rabano surfs like a pro, clearing all blocks in a row.

3. Ghost’s Flame: Blasts all blocks in a vertical line.

When the game introduces a booster, you can use that booster as much as you like only in its introduction level. After that, you will obtain a few free boosters.

Use them wisely and only for those levels that you couldn’t complete after multiple retries. You can purchase more boosters with coins.

Pay Attention to Your Objectives and the 3D Board

Unlike other match-3 puzzle games, Kleptocats Mystery Blast has a distinctive play area that can be spun by scrolling left or right.

For objectives such as removing a certain number of obstacles on the board or bringing down trapped cats, you should check the entire board to see if you have missed any obstacles on it.

Due to the unique structure of the game board, every level can be challenging and so you will have to scroll the board every now and then to check if you are missing out on your objective.

Besides paying attention to the entire board, you should also check the number of obstacles/blocks/cats that need to be cleared from the board.

Their numbers can be seen on the top-left corner of the screen. Sometimes, the number of obstacles on the board is more than the required number in an objective. Make sure you are closely following your objectives and clearing only those required to complete a level.

Fill the Star Jar to get Awesome Rewards

On completing a level, you will get stars, which are collected in a tiny jar. You will have to collect a certain number of stars to fill the jar and obtain rewards, such as coins and boosters.

You might also get a booster that remains free to use for the next few hours. When you fill the jar, tap “Claim” and make sure you tap the “Get Better Rewards” button to get more coins and an extra booster.

How to Get Three Stars in Every Level

It’s not easy to get 3 stars in each level in a match-3 game, especially in Kleptocats Mystery Blast, where you have such challenging objectives and a unique 3D board. However, make sure you create more power-ups and combine them to complete all objectives before running out of moves.

All moves remaining at the end of a finished level are converted into power-ups. They explode and clear a lot of blocks, which fills the star meter on the upper-right corner of the screen. The more power-ups and combos you will use, the faster the star meter fills up. This will also let you complete your objectives faster.

Here are a few additional tips and tricks to get more rewards:

– Keep an eye on the map for a floating cat. Tap him when he appears and watch a video to get power-ups and coins.

– Use the portal to get bonus rewards. You get 1 free portal reward each day. You can spin the portal again after watching a video. You might get infinite lives for 30 minutes or more, boosters or coins from a portal. The portal’s icon is displayed just below the star jar.

– The “Cat-a-Log” under menu has cool bios and trivia of your favorite Kleptocats kitties. You can unlock a cat’s bio using coins. Once you unlock it, don’t forget to share your new cat via social networking sites or email to get bonus coins.

– You can unlock more kitty trivia by boosting your loyalty ranking. Login every day to get “Loyalty Bonus” rewards and fill the loyalty meter by obtaining bonus rewards every day to boost your rankings. Loyalty rewards range from coins to boosters.

Previous
Get your Tentacles around Stylish new Octo-puzzler, ‘Takoway’ on iOS and Android from 3rd October, releasing in time for International Octopus Day! 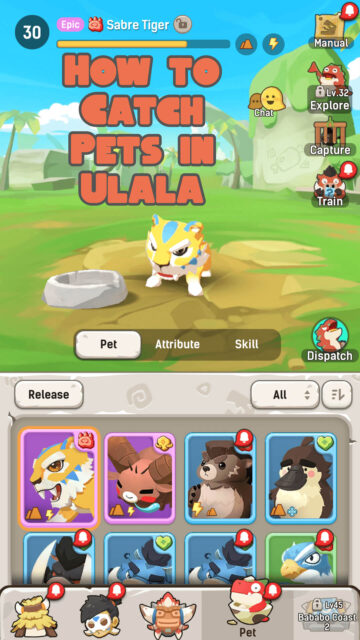 Next
How to Catch Pets in Ulala: Idle Adventure
Click here to cancel reply.