Jump Arena is a competitive vertical platformer from Neowiz. It lets you compete against other players in exciting PvP jump battles. The game’s real-time matching system chooses your competitor and once everything’s set, you and your opponent begin jumping on top of platforms to reach the highest point in a tower. The player who jumps higher, pushing away his opponent behind, wins the match. You will have to defeat your opponent before the timer runs out. Each tower offers a gold reward and the amount of gold received is usually higher if you move to a new tower.

Jump Arena is a pretty fast-paced platformer, so you will have to keep jumping to higher tiles to avoid falling into a volcano. Avoid obstacles and make the most of your skills to jump higher. These tips and tricks will help you win PvP matches and record your highest jump in a rank battle:

1. Improve Your Jumper’s Performance before Doing Anything Else

Before you start playing your first PvP match in Jump Arena, the first thing you should do is upgrade your character. This will improve his skills and performance. Upgrading will definitely help you have an edge over your opponent in PvP “Versus” mode as well as rank battles. You will see a marked improvement in his/her jumping and spring performance and it will be easy for you to elevate him higher up much faster. 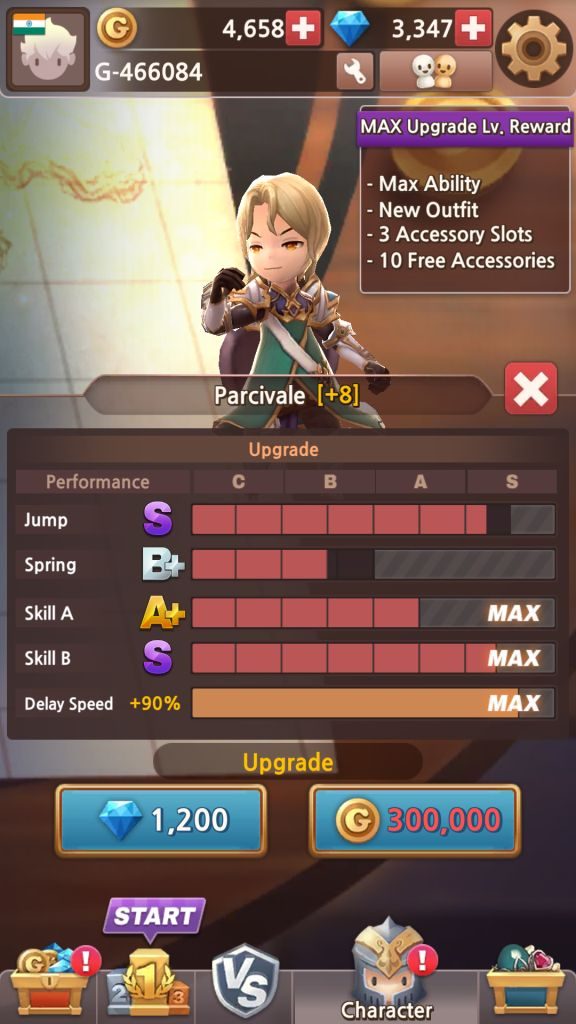 While upgrading, make sure you max out each performance attributes and skills, using gold and diamonds. You will receive 5000 diamonds as a welcome reward, which will be more than enough for maxing out most of a character’s attributes. Tap the envelope icon to open your “mailbox” and get your welcome rewards. You will get an additional 300 diamonds if you link your game with your Facebook account.

Once the tutorial game ends, you will receive a free treasure chest containing over 4000 gold and 104 diamonds.  Tap the treasure chest to get them. You will also receive another 4K gold under “Must Have Items” in the shop menu. Wait, there’s more. Tap freebies and get 3800 gold and 14 diamonds from the freebie chest. You get a freebie chest every 6 hours. All these diamonds and gold must be put to good use, so choose your character wisely and upgrade him/her before a PvP match or a rank battle.

When you upgrade a character, the attributes are upgraded in a sequence, which starts from “Jump”, then “Spring” and so on. The performance upgrade levels of each attribute, including skills are measured in letters, beginning from C, which is lowest to “S” the highest upgrade level. You can max out each attribute to S to get optimal performance for your character.

2. Make the Most of a Character’s Skill

A character’s skill helps him jump up higher. It activates after a certain number of combos. You get combos when you reach higher platforms (tiles) on a trot. Your combos resets when you fall to a lower platform. But they don’t reset when you fall by stepping on wooden panels or dashing into steel blocks. A skill gets activated when you get a certain number of combos. Each character has two skills – A and B. A activates a bit earlier than B so make sure you get more combos from the beginning without fail to activate skill A to quickly move up faster than your opponent.

The number of combos required to set off a skill varies from one character to another. For example, Parcivale’s Skill A activates when you get 10 combos, i.e. when you reach 10 consecutive platforms, whereas Verdandi’s skill activates when you get only 5 combos. When you are upgrading starter character, go to each character’s profile by tapping his/her portrait on and then tap the magnifying icon on the skill section to know more about each skill. Upgrading a skill increases the height at which a character jumps up. Select the best character and then use diamonds/gold to upgrade a starter character’s skill so that you can jump much higher to beat your opponent in a PvP match.

3. Focus on your Character while Jumping

While competing against your opponent in versus mode, your competitor’s current level can be a distraction if you keep looking at his position while jumping. A bar on the left side of the screen shows how high your opponent has jumped or how high he has to jump to reach your current position. Don’t look at this bar. It will surely distract you from your goal, which is to reach as high as possible while avoiding traps and obstacles. If you keep looking at your opponent’s current position, you will lose focus and may bump into an obstacle or fall to a lower tile. Worse, you can fall down, which could mean game over and your opponent will be automatically declared winner once the timer hits zero.

Concentrate on your character, try to get combos to activate skills and collect power-ups such as springs and booster shoes to reach high up faster. These power-sups can be found on certain platforms. For example, collecting a spring will turn all concrete platforms into springs. You will reach a higher platform much faster if you bounce on a spring.

In a rank battle game, you will have to keep jumping over platforms to record your best height and rank higher up on the online leaderboard. You will get rewards based on your current rank at the end of a league, so make sure you play at regular intervals to beat your previous best height or your opponent’s best height. The rewards tier based on player ranks depends on the league you are in. So you will receive only 450 diamonds if you rank first in the bronze league, but you will get 700 diamonds if you rank first in the silver league. You can play a rank battle every 4 hours. Make sure you take the best character to a battle and equip accessories to him/her so that you reach greater heights at a very short span.

5. Equip Accessories to Your Character to Boost His Performance

You can equip accessories to your character when he/she reaches max level. To reach max level, you will have to keep upgrading your character. Once the maximum level is reached, you are ready to equip items such as necklaces that improve spring effect or boost your jumps. You will get these accessories from wooden, silver and gold chests. The higher rarity of a chest, the more accessories you will receive. An accessory can only be equipped to a certain character, so when you get one, make sure you note down the name of the item and the character it can be equipped to. You can also get a list of items under “Accessory” tab which is located next to the “Character” tab.