.io games are pretty popular these days, thanks to Agar.io. Now Universal Studios Interactive Entertainment brings an exciting new .io experience to your Android smartphones. It’s fun, easy to play and funnily scary. Jaws.io lets you become the iconic shark as you devour everything that comes your way. You begin your adventure as a boat-owner, collecting objects, rescuing doomed swimmers and attacking the big bad fish. Everything goes well until you become the hunted and this is when the fun begins. 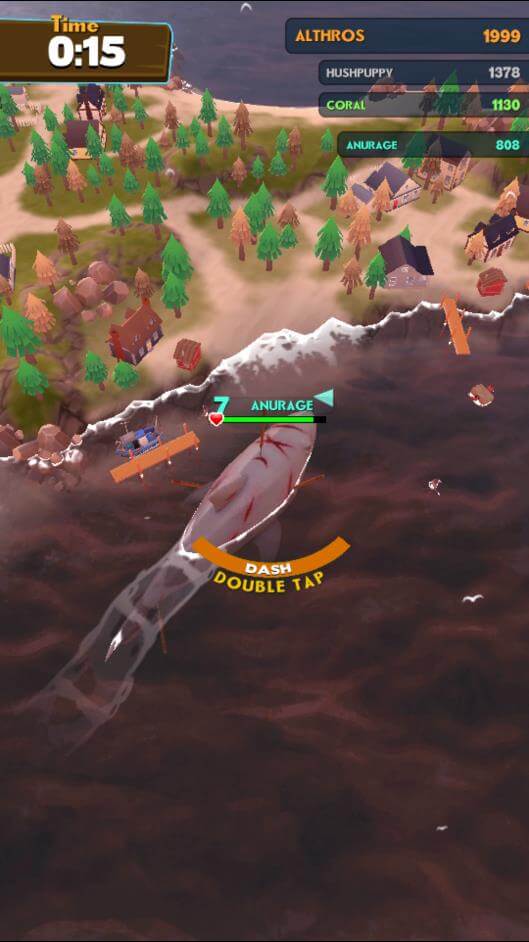 In jaws.io, your objective is to score as many points as possible before time runs out, and reach the top of the player leaderboard. The highest scorer wins the match. When you begin, you will probably encounter an AI shark or a player shark. You will become the shark if you manage to kill it.

As the captain of your boat and then the deadly shark, you will have to score points, reach the top of the leaderboard and win the match! With these tips, hints and strategies, you will be able to make the most of your roles, survive and beat others in this high-scoring game:

When the game begins, a low-HP AI-controlled Jaws will be roaming the sea. Quickly approach it and your boat will attack it automatically. Pay attention to the red shark radar on the screen if you are finding it difficult to locate the AI shark.

Since the AI-controlled shark’s HP is low, you will be able to defeat it very quickly. Just make sure you are the last player who eliminates it if you want to become Jaws. Yes, that’s right, the last player who kills the shark becomes the hunted. Make sure you have a higher score to increase the chances of turning into a shark. You can now start gobbling up humans, boats and other objects that come your way.

Since scoring points to reach the top of the leaderboard is crucial to win a Jaws.io match, your goal should be to pick up swimmers, swallow smaller fishes, destroy stationary boats/ships, piers and bump into buoys. Doing this, your boat will grow bigger in size in no time. You can now capsize smaller enemy player boats to temporarily stop them from climbing up the leaderboard. This is one important strategy to climb up the leaderboard faster.

Be careful when you spot bigger enemy boats. You can easily swallow player boats that are smaller than you, but your boat will be capsized by bigger boats if you dash into them. Keep exploring the ocean and you will find swimmers, piers, stationary boats, fishes etc. close to the shores. Also, try not to be too close to the shark or else you will be eaten up.

3. Use the Super Shot at the Right Time

Your boat’s special power called “Super Shot” inflicts great damage to the big fish. The super shot bar underneath a boat fills up when you pick up swimmers and swallow smaller objects. Speed up progression of the super shot bar by destroying piers and large stationary boats. When full, just double tap the screen to launch the super shot.

You should use the super shot when the shark’s HP bar is at its lowest. This will let you snag kills from other players and maybe you could become Jaws yourself since the last player who kills the shark becomes the big fish.

4. Don’t Underestimate the Power of Your Boat

While it’s true that you will score more points when you become Jaws, the risks of being killed quickly by other enemy player boats is also higher since multiple boats will attack you. You can’t escape. There is a lower risk of being wrecked when you are in boat mode. You will keep earning points, rescuing swimmers, destroying ships, piers and other objects floating on the sea without worrying about enemy boats. Once your boat becomes bigger, you can swallow smaller enemy boats to decreases their chances of ranking higher on the leaderboard.

5. Devour Everything Close to the Shores

As Jaws, try to avoid enemy fire as much as possible in the beginning. Move closer to the shores to swallow piers, partying people, stationary yachts/ships, swimmers etc., to quickly earn points. You are on a safer side when you roam along the waters close to the shores. When you are done gobbling up objects and hapless swimmers, you may hunt for boats that may approach closer to the shores. You will be under heavy enemy fire, but you will rake in lots of points if you gobble up a few enemy boats.

6. Use Dash to Squeeze Through Multiple Enemy Boats

In boat mode, you have super shot. In Jaws mode, you get “Dash”. Keep swallowing objects and people to fill the Dash bar faster. When full, double tap to move very fast. You can use this power to your advantage when multiple enemy ships attack you. Double tap to move away from them at lightning speed. You can also use “Dash” to quickly charge at an isolated enemy ship and swallow it.

7. Unlock Boats and Sharks for Free

In Jaws.io, you will have to pay real money to unlock skins. However, you can also unlock them by completing a few simple tasks. Here’s how to unlock shark and boat skins:

How do you unlock red jaws/ black jaws?