The sequel to the blockbuster shark sim game lets you control fiercer sea predators. Hungry Shark World has amazing 3D visuals and the sharks look deadlier than ever. There are over 15 unlockable sea beasts, each more ferocious than the other.

Your goal is to help your sharks survive the sea as long as they can, eating prey and earning coins as they keep gobbling humans, fishes and other aquatic prey. There are “pets” that can accompany your shark and help you complete missions faster. You also have access to special items that can assist sea predators in trapping their prey easily.

Hungry Shark World is easy to play and fans of Evolution will be familiar with the game play. New players will have a fun time exploring the sea for food, special items and hidden letters. If you are playing this game for the first, then you will find tips and hints very useful:

1. Eat Humans and Birds to Fill the Life Meter Faster

Fishes, especially the smaller ones, swim pretty fast and it’s not easy to devour all of them. You may have to go deeper to find fish and this may decrease your shark’s life meter faster. When you can’t find fish and are running out of life, quickly swim up the sea surface to devour humans and birds. Eating them will fill your life meter faster. You can then move down to eat fish.

Keep the Boost button to your left pressed when devouring humans and birds so that they can’t escape your shark’s jaws. You should save some coins for upgrading Boost.

Beware of eating poisonous marine animals as it can decrease your shark’s life meter faster. Also don’t go too deep. If the shark can’t find any prey, he can go belly-up by the time you move him up the surface.

2. Pay Attention to Your Missions

Before pressing the play button, tap on each mission at the bottom of the screen to know more about them. Missions range from eating a certain number of fish and other aquatic creatures to reaching a score target. Some missions are marked as “Single” whereas others are ”Multi” missions.

You can check your mission progress anytime while playing. Just tap the pause button at the top-right corner of the screen the mission status box will be displayed on the screen.

3. Max Out Speed and Bite

Once you have accumulated enough coins, spend them to upgrade your shark. There are three types of shark attributes – Speed, Bite and Boost. Upgrading your shark’s Speed will make him swim faster.

Upgrading Bite will make him chomp on food faster. When you press the boost button on your left, it super charges your shark for a few seconds, making him faster than before. Leveling up Boost will help you boost your shark’s abilities for a longer period of time.

Try to spend most of your coins on Speed and Bite, because increasing these two attributes will help you survive longer. Your shark will be able to move and attack faster, devouring prey at a faster rate. Max out these two attributes first using the coins you have earned from every play session.

4. Types of Sharks and How to Unlock Them

Shark Types are denoted by letters. There are 6 different types of sharks – xS, S, M, L, xL an xxL, with xS being the most common type and xxL is the rarest of them all. As you unlock more shark types, you will be able to use them to devour larger prey, even sea predators and poisonous marine animals.

The shark meter appears on the “Results” screen when the game ends. Fill the meter to unlock a new shark type. Survive the sea longer in every play session and level up to fill the shark meter faster.

Here’s a checklist of shark types showing their unique characteristics:

2. S Sharks can devour prey as shown in the screenshot below:

3. M Sharks can break sand obstacles and eat the prey.

4. L Sharks can devour larger preys and can be equipped with two pets. Can break metal objects.

5. xL Sharks are huge and can be equipped with the laser gadget. Can eat large preys.

6. xxL sharks the rarest of the rare sharks. They can be equipped with 3 pets: The screenshot below shows prey that can be devoured by such shark types: 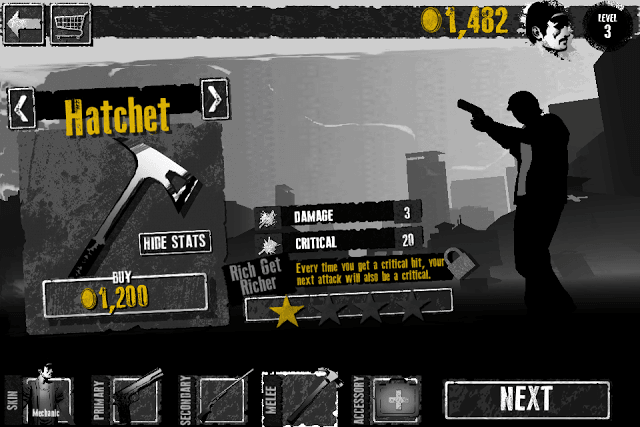