Power Rangers: All Stars is Nexon’s gift to fans and fanatics. An action RPG, All Stars features your favorite rangers from popular television series. There are more than 50 characters to collect and each ranger has its own unique ability and skill that can wreck havoc against baddies if used at the right time. You can create your own tactical ranger teams to win missions and PvP battles in the Dimensional Arena or complete character sets from popular TV series, such as Mighty Morphin, Wild Force, RPM, Dino Charge etc. When you acquire all rangers for a particular series, you will receive rewards like crystals.

There are different ways to acquire characters in Power Rangers: Stars. You will have to collect a certain number of ranger pieces to unlock a character. Sometimes, you might get a complete character, but in most occasions, you will have to gather pieces before you can summon the complete ranger. Here are some tips and hints to get ranger pieces:

Play Missions in Hard Mode to Get Ranger Pieces

You can obtain character pieces by replaying the same story-based missions in hard mode. You will have to complete a series of missions in a map in normal mode to unlock the hard mode. Once you unlock it, tap “Hard (Obtain Piece)” tab on the bottom of the screen to play the same missions in higher difficulty level. Make sure you get three stars in a hard mission. You can then use clear tickets to play the same mission again if you want to farm character pieces. If you want to get three stars, then try not to lose a ranger while battling enemies. 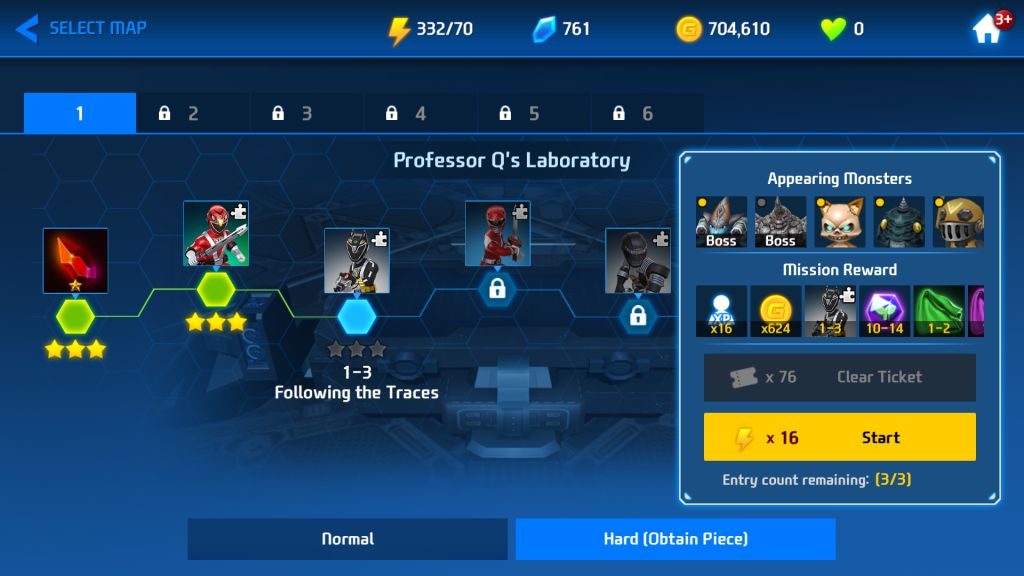 You will receive ranger pieces in normal mode also. You will have to complete certain missions in a map to get them. For example, in Map 2, “Dark City”, you will get red ranger pieces if you win the third, sixth and eighth mission. Make sure you finish those story-based missions in your first attempt to acquire character pieces as “first-attempt” rewards.

You can also get character pieces and other rewards from the “Power Pass” event. This seasonal event will last for 60 days, giving you enough time to get lots of rewards based on your tier. You will have to earn tier points, which is tied to your play record, so make sure you complete as many story and PvP missions as possible to earn them. 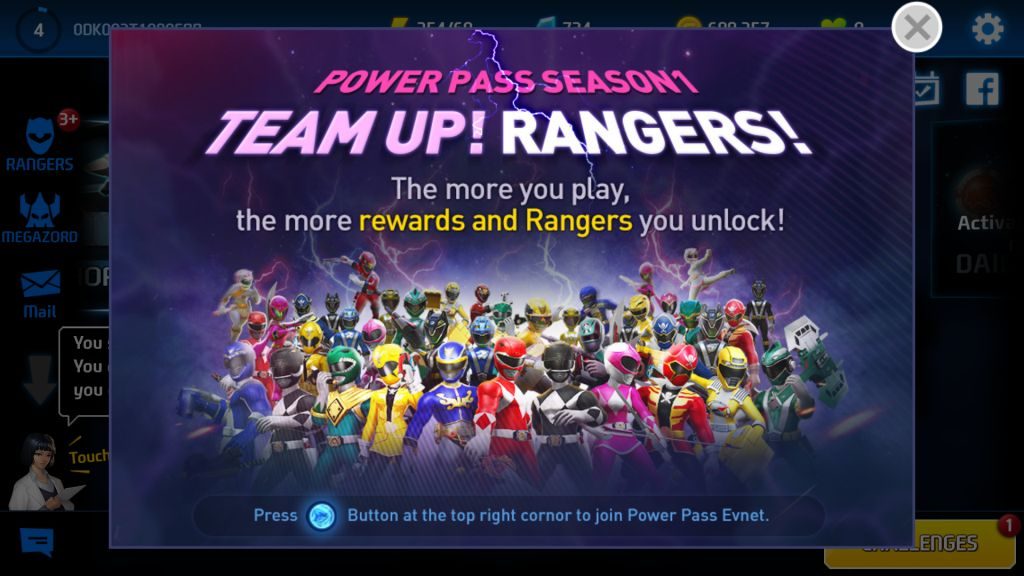 On your home screen, press the dinosaur button on the upper-right corner of the screen to access Power Pass. Under “Season 1”, you will notice your current tier and points. You will have to collect points and reach a target to get to the next tier. In the screenshot below, you will see that I have accumulated 8433 tier points, but there’s still a long way to go as I will have to reach a points target of 32873 to unlock the next tier. In tier 4, I will receive Pink ranger pieces. 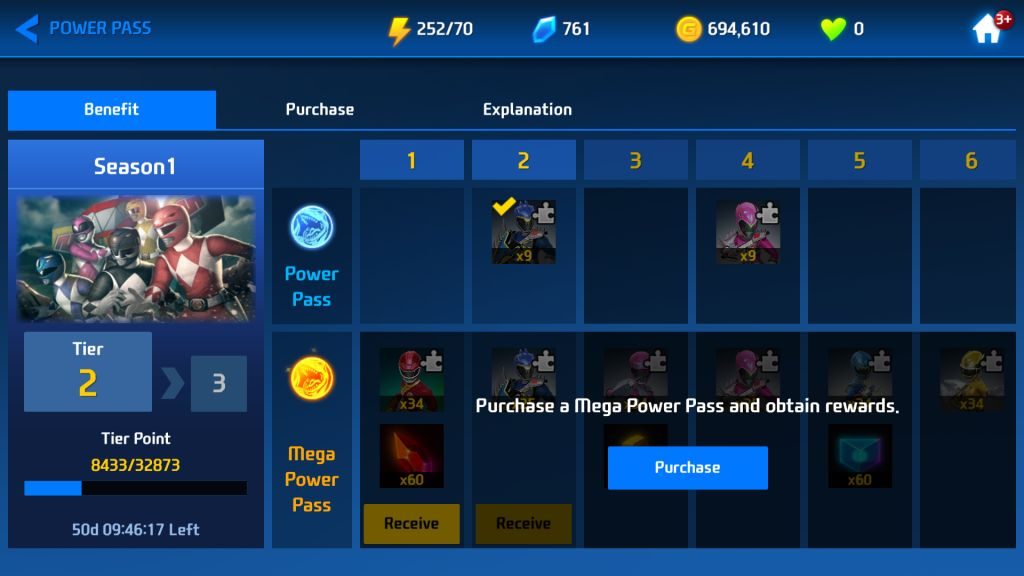 Tier points are linked to your play record. You will have to play missions, orb missions, complete daily missions (unlocks at player level 7), do research, participate in alliance raids etc. The best way to earn them is to complete story-based missions.

You will get more character pieces if you get the mega power pass, but you will have to purchase it with real money.

The special shop is the best place to get characters. You can get ranger pieces from theme boxes and normal summons. The first summons from the “series themes” sections is free, but later you will have to spend crystals to get Power Rangers: All Stars characters. In the first theme box, chances of getting rangers from the Mighty Morphin series are more whereas in the second theme box, chances of acquiring ranger pieces from the RPM series are more. The series theme changes from time to time so keep an eye on any changes and save crystals to get the best characters. There’s also a “Summon Ranger” section that grants a random ranger piece. 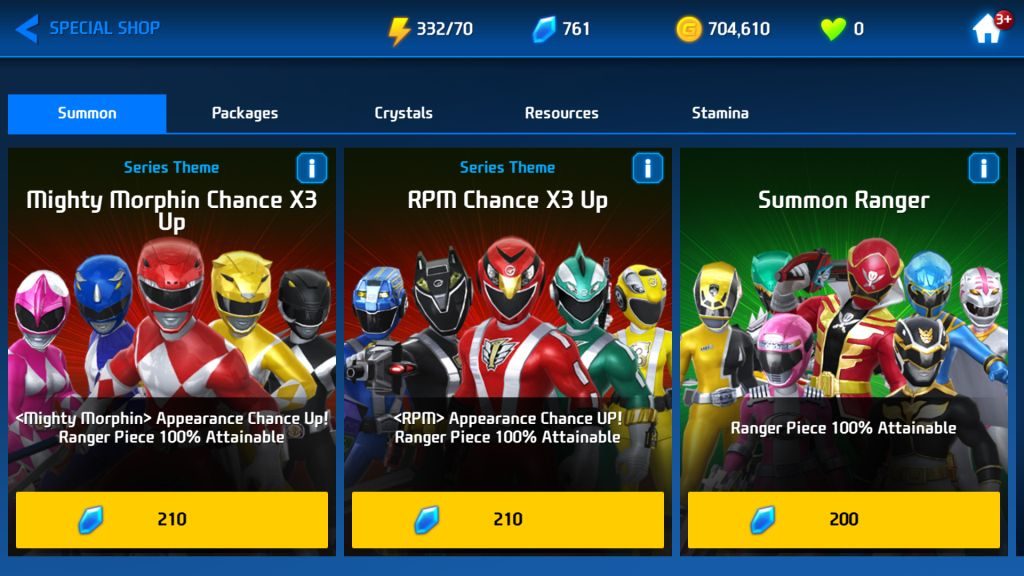 Under “Normal Summon”, you may or may not get a ranger piece. Normal summons are available for free after an 8-hour cooldown time, but you can use it any time by watching an ad or spending 90 crystals.

You can get ranger pieces from achievements. On your home screen, tap “Challenges” and then tap the “achievement” tab to get a list of tasks, such as collecting an X amount of gold and crystals, calling rangers, clearing hard missions etc. Along with ranger pieces, you will also receive crystals, which can be used to summon rangers at the special shop. The current set of achievements lets you collect Yellow Wild Force Ranger’s pieces. 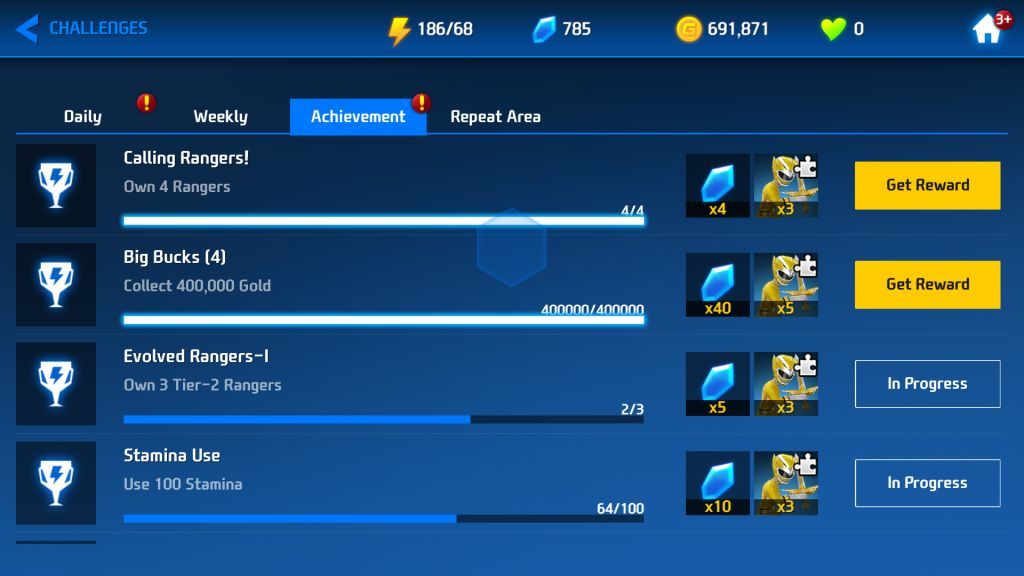 Don’t forget to complete guided challenges. Tap the researcher on the lower-left corner of the screen to go directly to a list of challenges. You will receive lots of rewards, such as gold, crystals, stamina, clear tickets and character pieces. There are 15 challenges. Complete them to summon the Megazord.

Tap the calendar icon, which is located just beside the gift box icon on the upper right corner of the screen to access “Daily Attendance”. 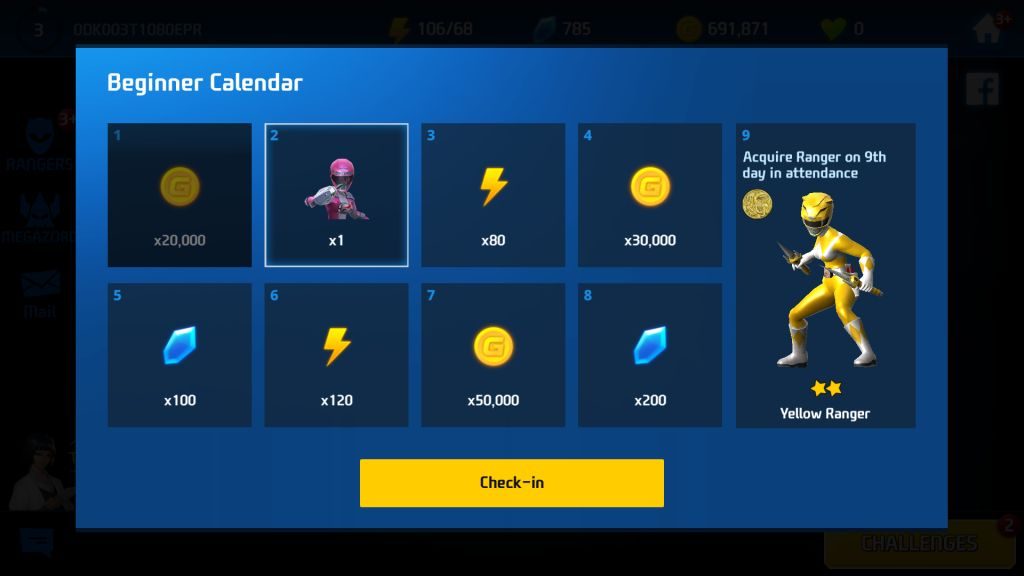 The Beginner Calendar shows the rewards you will be receiving per day after logging in. This special 9-day rewards calendar grants lots of gold, character pieces, stamina, crystals and a complete Yellow Ranger on the 9th day.

Get Characters from Check-in Rewards

Login daily to get rewards, and you will receive ranger pieces on certain days. Check-in rewards change on the 1st of every month, so make sure you play the game every day if you don’t want to miss out on ranger pieces on all important days.