How to Get All Endings in A Street Cat’s Tale

There are 11 different endings in A Street Cat’s Tale. You will unlock the sixth one (Rainbow Bridge) pretty quickly if the kitten dies. It’s a heart-wrenching ending and I pray you unlock it only after you have unlocked others.

Most endings are accessible once you reach an NPC’s intimacy level 7, which is the last intimacy level of each non-player character. This basic guide will teach you how to unlock all endings in A Street Cat’s Tale. But first let’s learn more about NPCs and their intimacy levels as they are connected with most of the game endings.

How to Interact with Animal NPCs

Non-player characters or NPCs can be found all over the city. These NPCs are animals such as cats and dogs and human beings. You can interact with them by moving your kitten closer to them.

When the kitten moves near an animal NPC, a callout appears above him/her, which suggests that you can interact with that NPC.

You can only see silhouettes of human NPCs in the beginning, but that’s not the case with animals. Animal non-player characters can be easily recognizable.

Ways to Increase Intimacy Levels with an Animal

When you tap on the paw icon on an animal NPC to interact, his portrait appears on the screen. Just below his portrait is his name and a tiny heart. The heart is located on the top-left corner of the intimacy gauge, which also mentions his name. In the screenshot below, it’s “Elder Cat”. The heart has a number which is the current “Intimacy” level.

There will also be three options on the right side of the screen – Run Away, Act Friendly and Give a Gift.

When you tap on “Act friendly”, you increase intimacy with that animal by a few points. In other words, the intimacy gauge fills up a bit. You can also give gifts to him to increase the intimacy level to a greater extent.

To give gifts to an animal, you must first know his likes and dislikes. Tap on the animated cat on the upper-right corner of the main screen. A new page will be displayed on the screen. It will display two tabs – Intimacy and Conversation.

Under Intimacy, the game will reveal a list of items liked or disliked by the NPC. It will also show an intimacy gauge. This gauge displays the number of points required to fill the meter and reach a new intimacy level.

Under Likes/Normal, you will see play buttons. Tap on them to watch videos and only then the game will reveal the liked items. Make sure you watch all ads under “Likes” and “Normal” to view items preferred by animal NPCs.

Once you know an animal’s likes, start searching for those items and give them as gifts to him. You can read this article to know how to carry items in A Street Cat’s Tale.

As you give gifts and act friendly, you will quickly fill up the intimacy gauge. When the gauge is full, the animal will reach the next intimacy level. Check the heart’s number on his intimacy gauge. The number suggests the current level.

While acting friendly and giving gifts is one way of gaining intimacy from animal NPCs, you will also have to complete certain quests requested by them.

When you reach a new level of intimacy with an animal, you can interact with the same animal to check if there’s any quest available. These are usually fetching quests, I.e. you will have to bring a special item to them (feathers, canned food, band-aid etc.). Please note that different quests are available in each intimacy level.

However, some animals may have a unique quest for you. For example: The white cat will tell you to talk to all cats when you reach intimacy level 6. Some may demand feathers; others may ask you to reach a certain intimacy level with another animal NPC.

When you reach an animal NPC’s maximum intimacy level, i.e. level 7, you will be able to unlock his ending.

As you already know, you will have to interact with an animal to gain intimacy. But you can do this only a few times. Once the interaction or conversation attempts are over, the paw and callout box over the animal disappears.

Take rest in the kitten house and start a new day to interact with the same animal again. You can increase interaction attempts if you upgrade the kitten’s shelter. To know more on upgrading, do read our A Street Cat Tale’s Guide.

How to Interact with Human NPCs

You can only see silhouettes of human NPCs while exploring the city. When you get closer to a human and interact with him/her, you will see the same options as seen on an animal NPC.

When you tap on a human to interact, you (the kitten) won’t understand a word as the conversation text will appear garbled. As you keep “acting friendly” with the human NPC, words will be a lot clearer.

You will start seeing their faces when you start reaching new intimacy levels. Just like animals, you will have to act friendly and give gifts to humans to increase levels. Once you reach intimacy level 7, (the highest level) with a human, you can unlock his/her ending.

To know the likes and dislikes of a human, tap on the animated cat symbol on the top-right corner of the screen. It can be found just beside the gear icon (settings). Tap on a human face (it will be a silhouette of his face). Now tap on the play button beside “Likes”, “Normal” to watch a video. This will reveal what the human needs and prefers as gifts. You can then find those items while exploring the city.

Like animals, humans will also offer quests which are available on certain intimacy levels. If you finish quests, you may even get gifts from them. If there are no quests available, then you can increase intimacy simply by acting friendly and giving gifts to them.

Please note that not all NPCS are friendly. Also, certain quest items, such as feathers can be collected only when the quest is unlocked at a new intimacy level and not before that.

To summarize, in A Street Cat’s Tale, interaction with NPCs, such as acting friendly, giving gifts and completing quests are a few ways to gain intimacy and reach new levels. When you reach the highest level 7, you will unlock their endings. 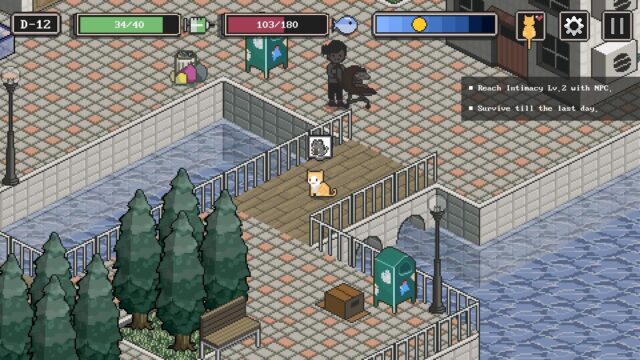 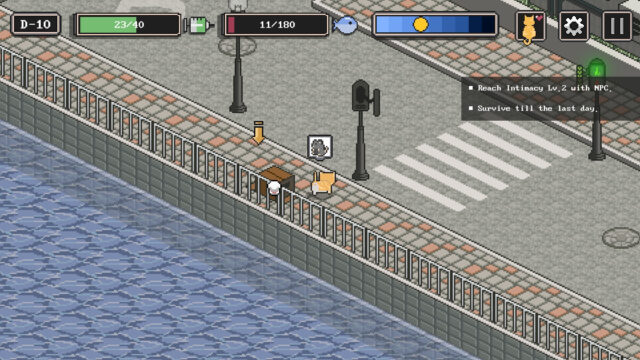 Next
A Street Cat’s Tale: How to Carry Items
Click here to cancel reply.