Frontline Commando: WW2 is a third-person fixed-screen shooter developed by Glu Games. While the entire setting isn’t as realistic as other games that are based on the same era, FC’s simple gameplay and mission variety will keep you busy for hours.

In this gallery shooter, the action takes place behind covers, so you will need to press the duck button a lot in order to avoid enemy fire and wait for the right moment to shoot them.

You will be rewarded with cash for every completed mission plus there are bonus rewards for every kill. Follow these Frontline Commando: WW2 tips and tricks to earn more rewards and find out how to eliminate enemies without taking damage.

1. Snipe’em Down Before They Escape

In sniper missions, you will need to identify the target first. Tap on the scope icon and aim at enemy soldiers to identify your target. Once the target has been spotted, wait for the right moment to shoot him. 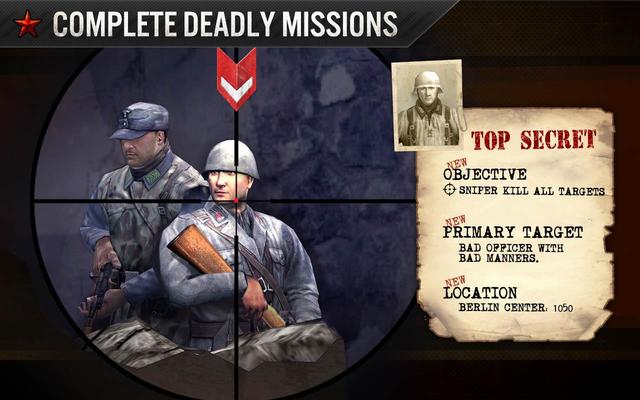 Remember, a missed shot will alert him and he will escape the scene. The first few missed shots will startle him a bit, but if you miss your target more than two times, he will flee from the area. Sometimes, your enemy may escape just after the first or second failed attempt. So take your time, observe enemy movement, wait for your enemy to stop and then shoot. Aim for the body, don’t go for headshots and you will easily take out your target.

Some missions will let you try out special weapons. There’s no harm in playing such missions as they let you use cool WW2-era guns and launchers for free plus there are rewards such as diamonds. You may also try for “Free Items” (button is located at the top-left corner of the screen) by watching 30 second video ads. Currently, this service isn’t ready, but developers may activate it in the near future.

3. Play a Mission Without Upgrading Weapons and Save Cash

Most missions will require weapon upgrades. While it’s not mandatory to upgrade your sniper rifles, machine guns or bazookas, upgrading weapons ensures a smoother victory against your enemies. In one sniper mission, I went ahead without upgrading my sniper rifle. I managed to eliminate my target in the second attempt only after getting a headshot. In the first attempt, a body shot didn’t proved to be fatal and he escaped the scene. Upgrades improve your weapon’s accuracy and other attributes, but if you want to save cash and head straight to battle without upgrades, you may have to try harder and target critical areas to snatch victory from the jaws of defeat.

4. Go for Head and Body Shots

Besides earning fixed cash reward in every mission, you can also earn bonus cash for every head-shot, body and limb shots. Head and body will earn you more cash than limb shots, so always aim for an enemy’s head and body. There is bonus cash for multiple kills as well, so look out for explosives near enemies and shoot at them to kill several enemies at once.

The core gameplay of Frontline Commando: WWII revolves around taking cover and shooting at the right moment. In rifle and bazooka missions, you will need to duck behind cover points a lot to avoid taking hits. Press the down arrow button to duck behind cover if enemies shoot. Do not, I repeat do not expose yourself to enemy fire. There will be a delay of few seconds before tanks shoot at you, so wait for that moment to blow them. Shoot at enemy soldiers when they are busy reloading their weapons.

If you don’t have enough cash to upgrade your weapons, then just keep playing skirmishes. Along with the fixed cash rewards, you will earn extra cash for each head-shots or body-shots. Skirmishes offer unlimited missions and probably do not require any weapon upgrades, unlike individual sniper, bazooka or machine gun missions.

7. Make the Most of the Scope

In machine gun missions, use the scope to get an accurate aim. Using it will make it easier for you to get head-shots. Don’t forget to duck when enemies are firing at you. Throw grenades only when there are too many enemies firing all at once.