The sequel to the hit sci-fi shooter is finally here! Evolution 2: Battle for Utopia takes you back to the deadly world of Utopia where factions have evolved and so is the gameplay. The game combines RPG with third-person shooter and strategy elements and has breathtaking environments. Evolution 2 offers lots of missions and huge bosses. Fighting enemies won’t be a piece of cake especially when some of them will do anything, such as committing ritual suicide to hurt you and your partner.

There are four factions in Evolution 2: Battle for Utopia – Black Legion, Red Faces, Dominion and the XI. Fighting the XI enemies can be extremely annoying and frightening, especially for someone who has arachnophobia. However, other factions are equally dangerous if not more. Each faction has “leaders” that possess unique abilities and it will require some planning in advance to defeat them. Our beginner-level level guide provides tips, tricks and strategies, which might help you complete more missions, defeat leaders/bosses and blast away waves of enemies.

Evolution 2: Battle for Utopia is a fixed-screen shooter game. You can move your character from left to right and vice-versa. Shooting from behind cover can be tough, especially when there are different types of enemies employing various strategies to defeat you and your partner. Some will lob grenades; others will commit hara-kiri and melee enemies will come closer to you to attack you. You will have to change positions every now to avoid taking damage from them. 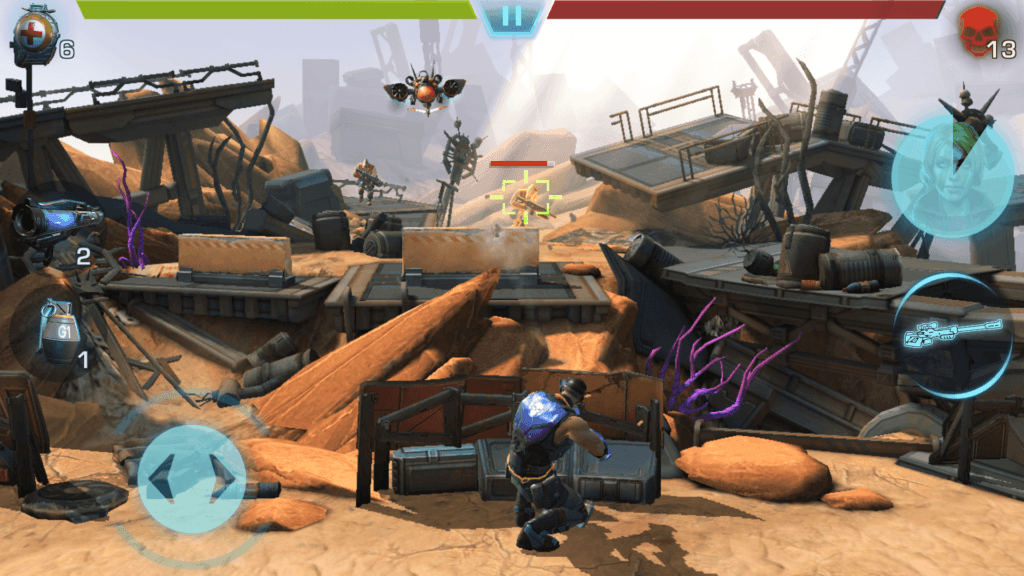 Tap and hold the virtual joystick on the left side of the screen to change your position whenever you sense danger. In fact, you should always keep moving to minimize damage dealt by your enemies. Your AI partner will change her position automatically so you don’t have to worry about her. Focus on your strategy and use the right weapons at the right time to eliminate enemies.

Always get out of enemy’s line of fire/explosion radius whenever possible. Move away from a sniper’s laser sight as you will always be her target and take her out before she eliminates you. Some enemies get into a full suicide mode by self-destructing themselves near you or your partner. 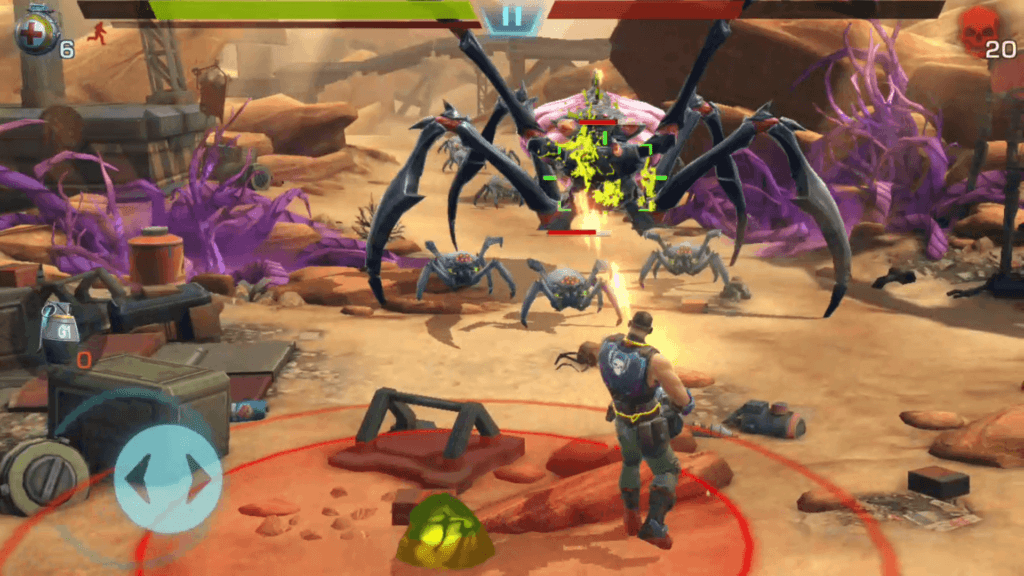 The good news is that the game will warn you by showing where the enemy will land before self-destructing. It will show the radius of the blast on impact using red circles and arrows suggesting where the suicidal unit will drop. The game will also mark the location and the direction of projectiles fired at you beforehand. Keep an eye on such markings while fighting enemies.

3. When Should You Use the Sniper Rifle?

You will unlock the sniper rifle in “Hijacking the Helicopter” mission. To equip it, tap the rifle’s portrait on the right side of the screen. Sniper rifle is available only in certain missions, you won’t find it in Xi missions.

Anna accompanies you in most missions and uses her sniper rifle to take out a few enemies. While partnering with Anna, you will notice a circular portrait pic of her. Tap it to unleash her “Destructive Shot” ability which lets her fire an explosive round that can deal damage to everything, including armored targets. After she does that, you will have to wait for a few seconds to her special ability again. It will take a few moments to recharge her ability. As you progress, you will unlock more partners. Just like Anna, each partner will have his/her own unique ability.

Whether you are battling enemy forces in Terror missions or story missions in Evolution 2: Battle for Utopia, you will get access to a list of enemies which you will encounter in that particular mission. Tap the tactical map on the “center” screen and then tap on a mission icon. Next, tap the binocular icon on the left side of the screen to get the enemy list. 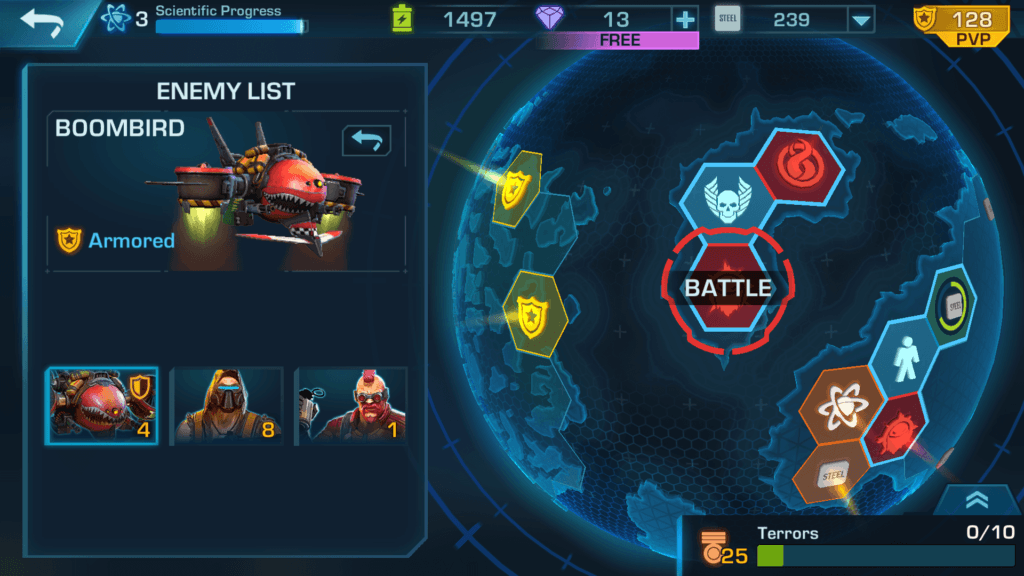 The list shows enemy portraits and whether they are armored or not. Also, under each pic is a number which suggests how many of those enemies you will face in that mission. So, if there’s a number 4 on Boombird’s portrait it suggests that you will face four Boombirds throughout the mission. On the battle screen, you will notice the total number of enemies you will be facing on the upper right corner of the screen.

In Boss Mode, you focus should be to defeat the main enemy. Your partner will take care of others, but you should first eliminate the main boss before killing others. Main bosses strengthen their minions and when they attack together, it will be very difficult to contain them. The damage dealt by the boss will be far severe than his minions, which is why it would be a wiser to kill the main enemy as soon as possible.

Tip: Use grenades on main bosses. Your objective should be to eliminate the main enemy as soon as possible and a grenade will do a whole lot of good to reduce its HP faster. Save grenades for boss missions.

8. Take Out Leaders to Weaken Other Enemies

In most missions, you will face a “leader” (not to be confused with bosses, they usually appear after a few missions) who will possess a special ability, such as lobbing grenades, sniping or self-destruction to deal more damage to you and your partner. Chieftains, Snipers, Raiders etc. are examples of leaders and each has a very unique ability. Raiders lob grenades, snipers snipe from a distance and chieftains attack using their “wands”. Take out leaders as they strengthen other enemies, some even have the ability to operate sentry guns.

Tap the “Hangar” tab to upgrade your partner. Upgrading partner not only improves his/her ability and damage but also grows your main character’s leadership. You will have to reach a certain leadership level to instantly win a “Terrors” battle. With the required leadership level, you don’t have to play that particular mission. You will still get your rewards without playing.

You will need biofuel, which is the most important resource on Utopia, and medals to upgrade your partner. You can earn those orange medals by completing a set of “Terrors” “Co-Op” and “Enemy Bases” mission. For example, if you complete 10 Terrors missions, you will receive 25 medals. Tap the world map to check medal reward conditions, which can be found on the lower-left corner of the screen.

Note: keep an eye on the upper-left corner of the screen for co-op mode alerts. A cell phone will ring. You will have to tap that cell phone to enter into a co-op battle to get medals.

10. Mine Steel and Other Resources 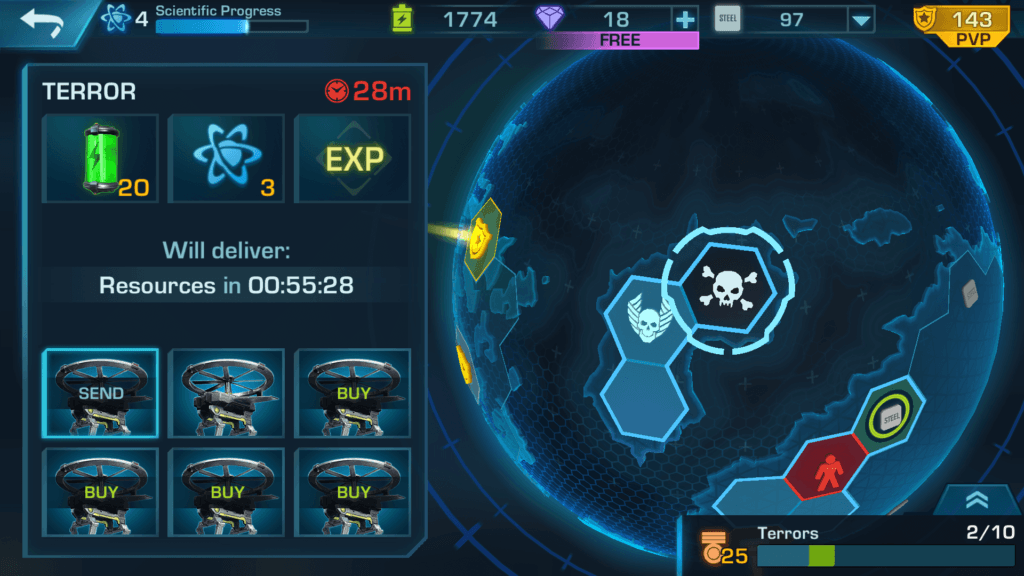 You can send drones to mine steel and other resources. Tap the tactical map and then rotate the globe to find resource tiles (steel etc.). Now tap the nearest resource tile with a green circle around it and then tap drones on the bottom left side of the screen to send them and mine steel. It will take hours to mine steel, but you can decrease mining time and increase depth by upgrading the geo exploration technology at the lab. The higher the scientific progress, the better the upgrades available at the lab. Keep defeating enemies and winning missions to increase your scientific progress so that you can unlock and research/upgrade more technologies and equip them to your heroes.

Can you tell me the best ways to strengthen my base against other players for tournaments? Also when I come in second or third place I never receive my rewards in my email. How do I claim those?

Thanks for the tips guys. I have a question: Can you please tell me how to increase the limit of 1000 units of resources? I want to buy a level B armor, but it costs 1300 steel, so I can't store above 1000 units.