Digimon Heroes brings your favorite digital monsters to your smartphones. The game lets you collect over 1000 common and legendary characters, create your own Digi-squad and defeat enemies in card battles.

Heroes’ unique card battle features will keep you busy for hours. You can upgrade and evolve characters in your squad, take advantage of their special skills and use your wits to defeat enemies. These beginner-level tips, hints and strategies will help you achieve victory in card battles, collect more Digimon characters and create a stronger team of heroes.

Keep an Eye on New Cards While Selecting Same-Colored Cards

New cards start appearing as soon as you tap on cards in your hand. Sometimes, a new card dropped from a hidden pile may be a wild card or a card that might complete a sequence of 3 consecutive/same numbered cards (Example: 5, 6, 7 or 3, 3, 3). Remember that choosing 3 same-colored cards of the same or consecutive numbers unleash a critical attack. 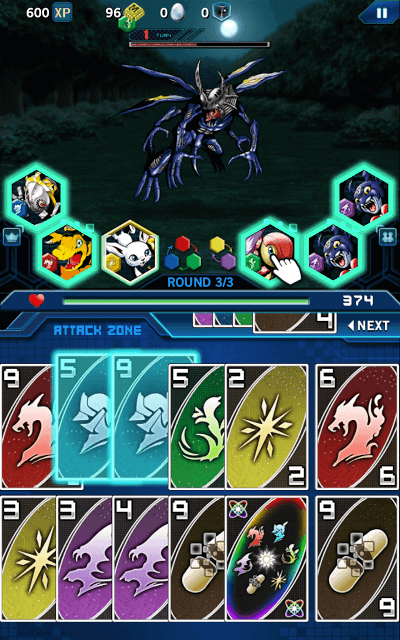 When a new card drops, note its number and color. Do the same when the second card drops. And luckily if you find a same-colored card/wild card that matches with them, just add it to your current card selection. If the new card matches with other cards in your hand or completes a series of 3 same/consecutive numbers, then you may tap on the previous two cards to deselect them and choose those cards that match with the new card.

In a battle, the enemy waits for a certain number of turns and then attacks. The number above an enemy’s life bar shows the number of turns remaining. Every time you match cards an hit an enemy, it costs a turn and when the turn count reaches 0, the enemy attacks.

You can get Digimon Heroes by hatching “Digi-Eggs”. These Digi-Eggs can be hatched using Digimoney, Friend Points (FPs) and Super Tickets. You can also get a free uncommon or rare Digimon character as Daily Rewards.

Earning FPs is easier than earning Digimoney. You receive 10-20 FPs when you select a battle companion or a friend before heading out to battle. You also receive FPs when someone chooses you as their battle companion. And if the battle companion happens to be a Facebook buddy, then you may receive up to 50 Friend points. While choosing a battle companion, make sure you choose someone that gives 20 FPs. Usually, such players can be found at the top of the list.

Using Friend Points, you may get a card within the 1-star to 6-star range, but chances of getting a higher-star card are rare. Since they are easier to earn, you will get to hatch more Digi-eggs and who knows you might get a 4 or 5-star character. 1 Digi-egg costs 200 FPs. Always take companions to battles, add them as your friends, connect to Facebook and take FB buddies to battle to get 50 FPs. Once you have collected 1000 Friend points, choose the 1000X pack as it contains a free Digi-egg besides the guaranteed 5 eggs. This pack may contain higher-star characters.

With Digimoney, the rarity range of Digi-egg increases to 5-10 star and chances of getting a higher star character are more. But Digimoney is not easy to earn. A player gets them after completing the final battle of an island. After finishing the last fight, the player gets around 20 Digimoney. Accumulate 100 Digimoney to get a character through a Digi-egg. There is another way of earning Digimoney. You can collect Digimoney as “Daily Gifts”. All you have to do is login daily to collect your rewards.

Your team consists of 5 characters. This includes a leader and 4 support characters. You can replace the current squad with a new squad by adding new characters to it or create an entirely different team from scratch. No matter what your team management strategy is, just make sure your Digi-Squad consists of characters that have higher rarity and most importantly, better stats.

Before replacing a team member with a new one, check ATK, DEF, HP and Support attributes. If the new member’s attribute stats are red in color, then he is weaker than the current character. If the stats are green, then you should go ahead and change. Here’s how to check stats and recruit the best ones in your squad:

Go to Team and tap a character that you want to change. You will see a new “Select Member” screen. This screen shows all characters collected to date.

Digifusing a character increases its level and boosts key attributes like ATK and Defense. Select a character that you want to upgrade by Digifuse. This will be your “Base Digimon”. Next select up to 5 characters or materials. They will be your “Material Digimon”. Before selecting Material Digimon, make sure they belong to the same element. If the target characters or materials have the same element as the Base Digimon, the latter will level up faster and will have improved stats. Selecting characters that belong to the enemy element or opposite element will have little effect on the base character’s level and attributes.

You may also use special materials such as EXP Floppies to level-up your base character. EXP floppies are also color-coded, so try to use those that match the color of your base Digimon Hero. You can get these special materials via Daily Login rewards and Daily Mission rewards. Daily Missions contains certain tasks or quests that need to be completed to get rewards. Tasks range from performing a set number of attacks in a battle to completing X number of battles.

When choosing a battle companion, select a character whose ATK and HP attributes are higher than the others. Many times, a higher attribute character may also give more FPs than others. A better companion can play a key role in battle, so choose wisely.

Wild cards play an important role in battle. Use a wild card if you have two same-colored cards with consecutive or same numbers. And if there are 3 wild cards in your hand, then match them to launch a critical wild attack, which allows all team members to attack enemies.