The latest entry in the growing list of mobile strategy games, Command & Conquer: Rivals, pits you against human players in quick 1 vs. 1 real-time battles. However, gameplay is a very different from the rest. Don’t expect a Clash of Clans type of a game. In fact, it’s much more interesting than other mobile RTS titles. Battles are engaging and you won’t be bored, thanks to diverse maps, environments, several new units to experiment with and the good old GDI vs. NOD rivalry. If you are a big fan of C&C games, then you should give Rivals a try.

In C&C: Rivals, you and your opponent will have to conquer platforms to launch missiles at each other. The first to destroy his opponent’s base wins the match. You can deploy infantry, weaponized vehicles and aircraft to take control of missile platforms with proper planning and strategy and deny your opponent to capture them. Being a mobile RTS, the game is fast paced to keep you on your toes, so you will have to be quick in thought and action. These tips, hints and strategies will help you find out various ways to pause the missile timer, defend platforms, make proper use of a commander’s special abilities and make your units more powerful.

1. Capture a Missile Platform as Soon as the Battle Begins

Command and Conquer: Rivals is a fast-paced RTS game, which is why it’s important to control a platform as soon as the game begins. Sending a troop to capture a platform will fill the missile bar in your favor unless your opponent engages with your units on the same platform or captures another platform. In such situations, the launch bar pauses and turns yellow. There are several scenarios in which the launch bar pauses. Check out point no. 3 to know more. 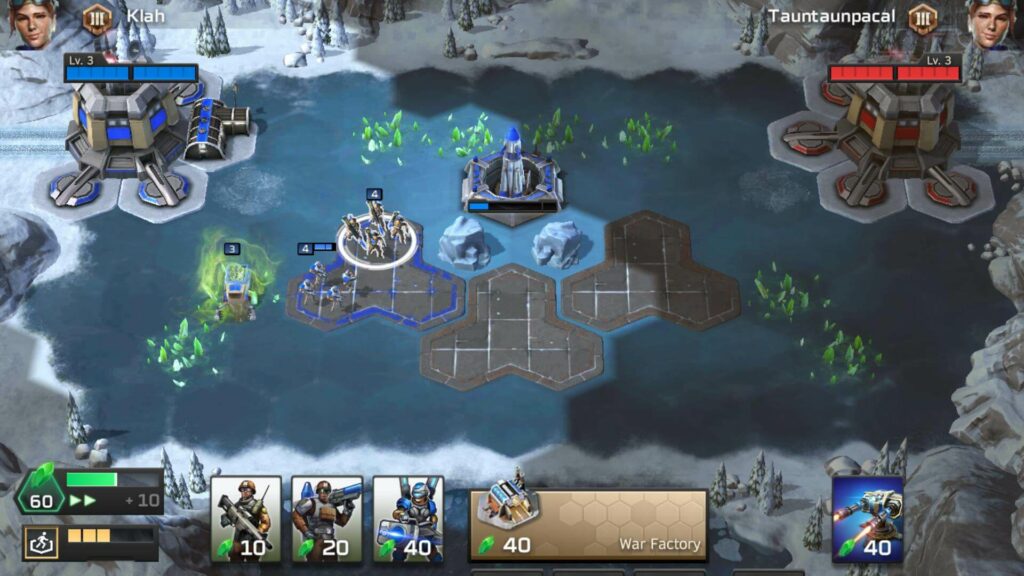 In some maps, there will be multiple control platforms on a battle arena. Your goal should be to capture the nearest missile platform by deploying the fastest moving troop to it. GDI’s riflemen move pretty fast and they require only 10 tiberium. When the game begins, quickly build a barracks, deploy riflemen and then tap the harvester to harvest tiberium. You can then deploy the Missile squad to provide support to your riflemen. The recharge time for troops is fast in the beginning, so make the most out of it.

2. Fill All Three Sectors of a Platform to Reinforce it

Your next objective is to capture an entire platform. Don’t allow your opponent to take control of it. A single missile platform has three sectors. Moving a unit to any one sector of a platform will let you control it. However, if you want to make sure your opponent does not recapture it, fill the other two sectors with more units. It won’t be easy for your opponent to defeat all three units. Also, your opponent’s units have to be inside the platform if they want to pause the launcher. 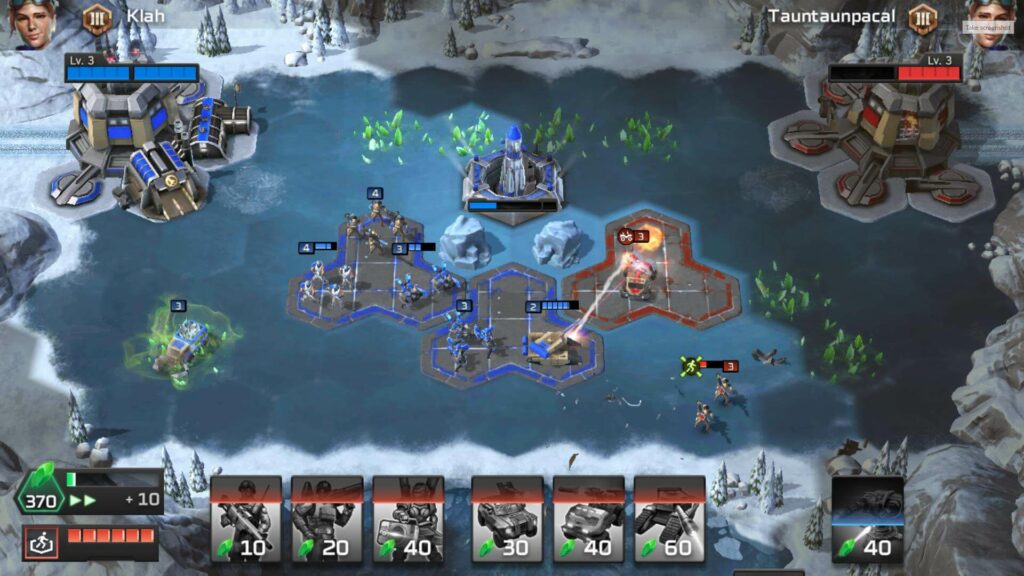 Try to deploy three different types of units or at least two different units to a platform. They will automatically fire the closest enemy unit. Make sure one of them is the missile squad as it can take care of most of the enemy vehicles. As your troops keep your opponent’s unit busy, you can now focus on the other platform. Quickly deploy your units to another platform.

3. How to Pause the Missile in Command and Conquer: Rivals

Before playing a player versus player match in Command and Conquer: Rivals, you should know when does the missile bar turn yellow. Being well-versed with various control scenarios will make it easy for you to take complete advantage of the game. Check out these key battle scenarios:

1. If there’s a single platform and you take control of a missile platform, the bar turns blue and fills up slowly. It turns blue even when you move only one troop to the platform. It will be blue and keep filling up slowly unless enemy units enter the platform and attack your units. Once full, the missile will launch to destroy your enemy’s base.

5. If there are two platforms. You have captured the first, your opponent has taken control of the second. Your opponent enters the first platform, attacks, defeats your units and captures your platform. The missile bar will turn red. To pause the missile bar, you will have to enter both platforms to attack his units. If you enter and attack only one of the captured platforms, the platform color turns yellow, not the missile bar.

6. There’s another scenario that might surprise you – If there are three platforms, – you have captured two and your opponent has one. Obviously, the missile bar will be blue. You now move your units from one of your platforms to opponent’s platform. Now that platform is empty as all your units have entered the enemy’s platform and are attacking his units. The bar still remains blue and keeps filling up unless the empty platform is occupied by your opponent or your units have been defeated by the opponent’s units on the third platform occupied by his troops.

If you pay attention to such scenarios, you will know how to capture missile platforms and sieze those that have been under enemy control. Such scenarios will also help you to come up with different strategies to recapture platforms.

4. Attack the Enemy Base with Vehicles or Shockwave Troopers

A player wins when his opponent’s base is completely destroyed. Usually, capturing platforms to launch rockets at the enemy base is the quickest way to destroy it. Just two rockets and it will be reduced to rubble. Of course it’s easier said than done as his opponent will try his best to recapture platforms. You can try this strategy to disrupt your opponent’s attack plan:

You should do this when you have captured one or two platforms, in case there are three missile platforms. You can then divert the attention of your opponent towards your units by attacking his base – that big structure at the far end of the screen – with your troops. You can send pitbulls and predator tanks as they have a high DPS and HP and will deal more damage to the enemy base. You can also send Shockwave Troopers as they are stronger versus buildings. Attacking his base will definitely make him panic and he will be confused whether to take control of missile platforms or defend his base. You should try this when the enemy is hell-bent in recapturing your platforms, the rocket launcher keeps getting paused every now and then and the battle is heading towards a draw.

5. Know a Unit’s Strength and Weakness

Command and Conquer: Rivals rock-paper-scissors mechanics plays a key role in battlefield. You will have to deploy units that are stronger against enemy unit’s “type”. There are three types of units – infantry, vehicles and aircraft and each unit is strong against one or more of these types. For example: The missile squad is strong versus air units and weaponized vehicles.

While battling, you can tap and hold a unit card to know its strengths. 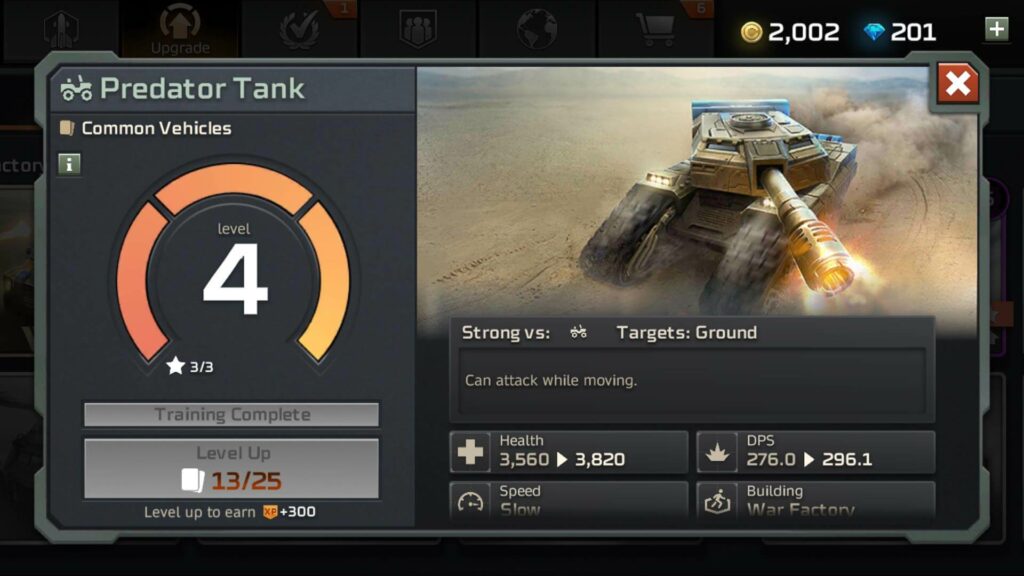 There’s another way to know your unit’s strength and weakness:

To know each unit’s strength, tap the arrow icon on top of the screen and then tap a unit’s portrait. On the right-hand side, you can see stats, including a “Strong vs” and “Target” section that shows your unit’s strengths and the type of unit it targets. For example: The Rhino is strong versus ground and air and targets air and ground units.

6. Make the Most of Commander’s Special Skill

There are four commanders in Command and Conquer: Rivals and each commander has a unique ability that can be of immense help during combat if you know when and how to use it. You should make the most of a commander’s ability to snatch victory from the jaws of defeat.

Lt. Strongarm will be unlocked for you soon after the tutorial ends. Her special ability is the Minigun turret. It’s strong versus infantry and aircraft. You should use it when you have taken control of at least one platform. Why? Because you will expand territory when you capture a platform and this will allow you to build a turret further away from your base. You can launch a surprise attack at infantry by building it anywhere within your expanded territory. You can also use the turret to provide support to your units, especially those that are defending a platform.

There are 3 more commanders to unlock: Dr. Liang, Gen. Solomon and Col. Jackson. Dr. Liang’s ability is the Repair drone that can heal adjacent allies. Gen. Solomon’s Ion Cannon targets any tile. Just tap a target to deal high damage to it. It will also deal medium damage to surrounding units. Make sure to use it on a platform containing multiple enemy troops.

Command and Conquer: Rivals lets you gather tiberium with the help of a harvester. The tiberium will then let you create more units. However, it’s a poisonous plants and the fields are a no-go zone, especially for human soldiers. Don’t move your infantry units near tiberium fields. If you do this, their HP will decrease automatically. They are poison to human units. Have noticed many of my opponents made this mistake when they move towards my territory via the tiberium fields. However, I haven’t noticed any damage inflicted on vehicles when they move towards them.

8. Train and Level Up a Unit

Training and leveling up a unit greatly improves its combat strength. You will need credits to train a unit. Training a unit increases its DPS (damage per second) and health. To upgrade or level-up a unit, you will have to train thrice. You can level up a unit card once you train it for the third time. You will need a certain number of duplicate cards or  commander cards to do this. You can get them from crates and player level rewards. Leveling up increases the stats of a unit or commander considerably.