The sequel to the popular JRPG now gets bigger and better with lots of new characters, weapons and plot twists to keep you busy for hours. One of the most unique features of Brave Frontier: The Last Summoner is the ability to control several characters at once in a single turn-based battle. The game boasts hundreds of heroes and villains, each possessing unique skills. You can equip them with weapons and experiment equipping your heroes with a new weapon type to bring out the best in each character.

The Last Summoner has several game modes and events. You can replay story mode to farm karma, gil, which the game’s primary currency and player XP. Karma can be used to fuse upgrade materials with your heroes to level him up faster. You may find this beginner-level guide and tips useful if you are new to Brave Frontier. You can also watch our gameplay video to know more about fusion and combat:

Turn-based combat in Brave Frontier: The Last Summoner can be fun and engaging. To attack a single enemy, you will have to tap him and then tap one of your party members. However, if you want to attack all enemies at the same time, just swipe all weapon icons below hero portraits.

Each team member can carry only one action per turn, so choose your actions wisely. You can attack using a weapon or choose a skill if you are facing a tougher enemy or a boss. You can also put party members on guard if an enemy is about to launch a devastating attack. A team member receives less damage when he is put on guard. The guard icon is a golden shield. To choose guard, you will have to swipe up on a character’s portrait until the golden shield appears. You can put your weakest character on guard or put all heroes on guard depending on the enemies you will face. When you put a character on guard, you use up an action and he/she won’t perform any action until their next turn. Just swipe on shields to defend attacks.

You can also use a character’s skill to deal more damage to an enemy, defend against enemy attacks or provide support to fellow party members. All you have to do is swipe up on a character’s portrait to select a sphere shaped skill and then tap to unleash it. These “Brave” skill spheres are – Burst, Guard and Support. Bursts are special attacks, Guards provide defensive effects and support provide various effect. To know a character’s skill, tap and hold his/her portrait on the battle screen to bring up his/her page. Now tap the skill sphere(s) on the bottom of the character info screen to know more about it.

You will need blue combat crystals to activate a skill. During battle, attack enemies and collect crystals from them. Use them to unleash special skills when you face a tougher enemy during battle. You can unleash multiple skills by choosing each party member’s skill sphere and then swiping right.

You can turn on “auto” to allow your heroes engage with enemies automatically. The auto button appears only when you are replaying a mission and is not available in newer missions.

Those were a few combat tips and hints that will help you get started if you have just began playing. But wait, there’s more in this Brave Frontier guide. Read on if you want to know more about missions, fusion and battle strategy:

Look before You Swipe

Swiping all weapons to attack enemies at once can be fun, but you might want to pause and have a look at your enemies. Many times you will face tougher enemies. If you swipe right blindly, you may be choosing a weaker element character against a stronger enemy, which will result into less damage dealt to him. Tapping on a hero whose element is stronger than the enemy can help you reduce his HP quicker. 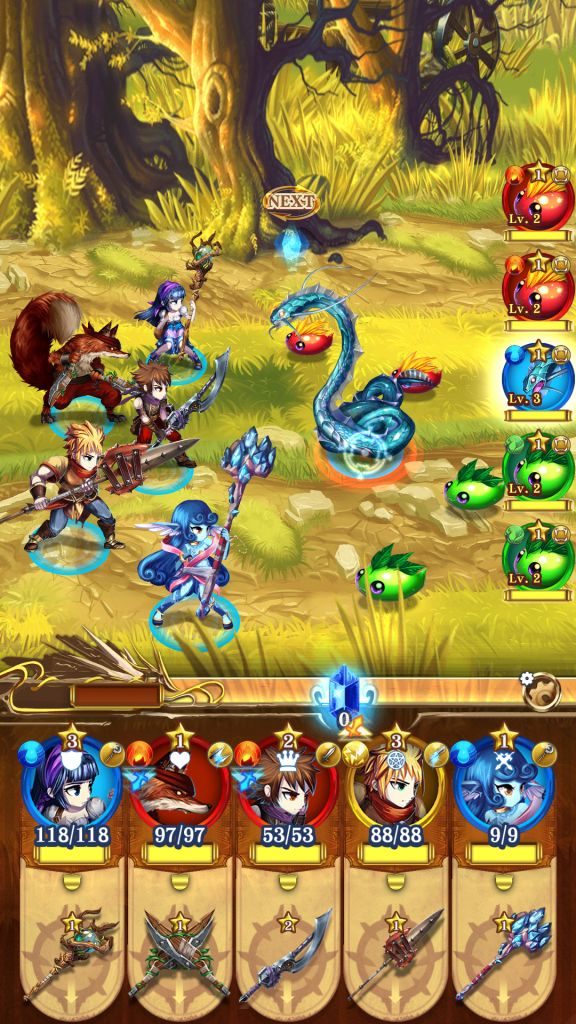 Before swiping, tap an enemy to find out which character in your team is stronger than him and then tap that character who has an animated up arrow icon on his portrait. The up arrow suggests that the character’s element is stronger than the enemy’s element and so the damage dealt by this character will be higher than other team members. This way you can eliminate tougher enemies first before dealing weaker ones.

There are 6 elements and each hero boasts one of these elements: Water, Earth, Fire, Thunder, Dark and Light

Fire is stronger than earth but weaker than water

Water is stronger than fire but weaker than thunder

Thunder is stronger than water but weaker than earth

Earth is stronger than thunder but weaker than fire

Of all six elements, light and dark are an exception and they are stronger against each other.

Equip Better Weapons to Your Heroes

As you battle more and more enemies in Brave Frontier: The Last Summoner, you will have to equip powerful weapons to your party members if you want to defeat tougher villains. You might get weapons as rewards from certain missions, and there is a high chance of getting them in story mode boss missions. You can also get them from weapon events that lets you play missions to farm weapons. 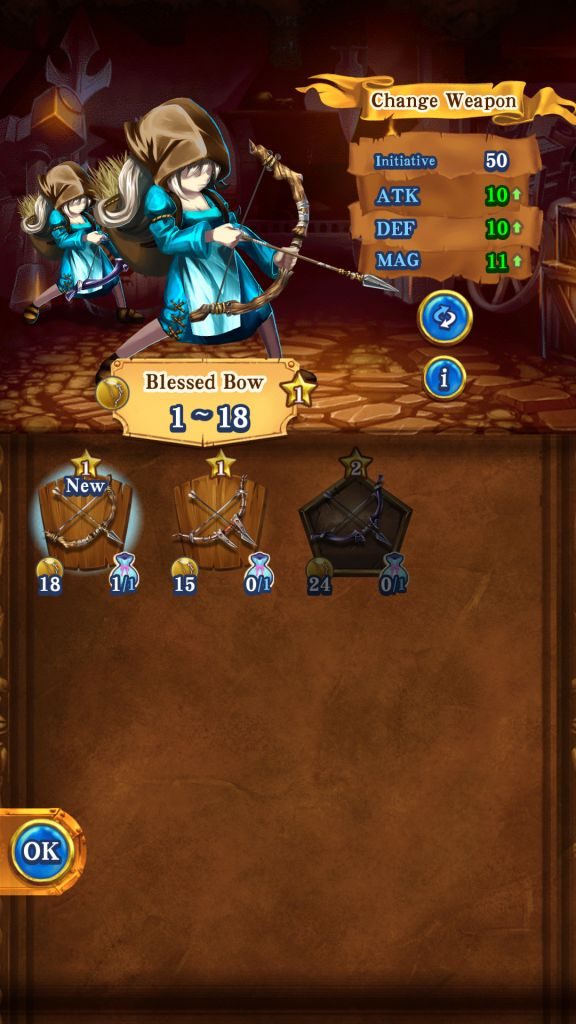 Once you acquire weapons, head to each character’s page under “Units” and tap the Change button. Most units can wield only one weapon type, so you may find two or more weapons of the same type in the equipment selection page. Just tap a newly acquired weapon and see if there’s a stats change. Numbers in green show an increase in key attributes such as ATK, DEF HP etc. But if you select a weaker weapon, stats turn orange and there’s a down arrow icon beside each attribute. Select a weapon that improves key attributes.

Fusion will help you Gain a Quick XP Boost

When your characters level up, they improve key stats such as ATK, DEF and MAG. They gain XP during battle and level up when their XP bar is full, so you may consider playing or replaying more story-mode missions to level them up quickly. 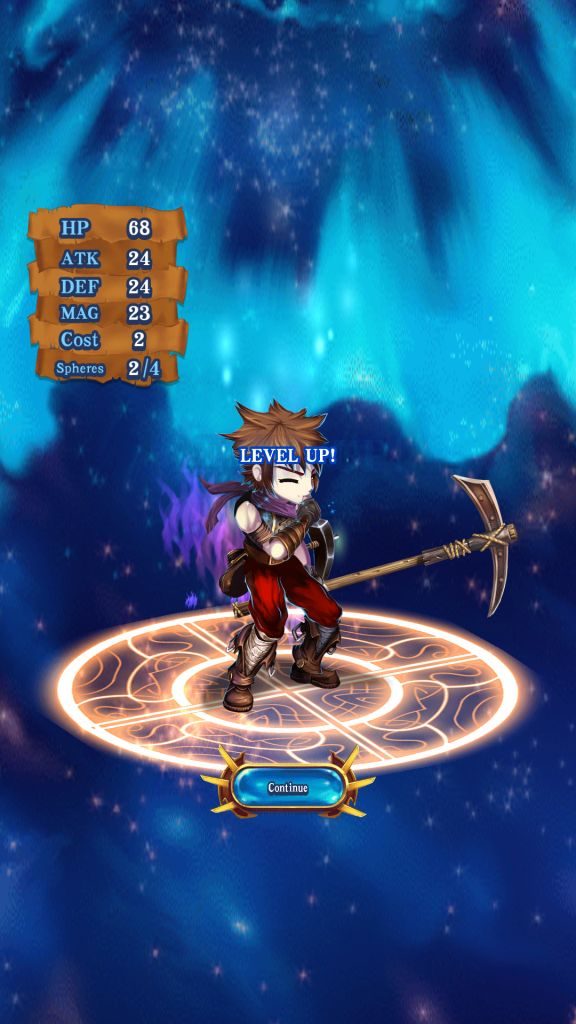 However, there’s another way to level up faster. All you have to do is go to a character’s page and tap the “Fuse” button to fuse upgrade materials such as “metal kings”, “metal gods” etc. into your character and get a big EXP boost. You will also need a certain amount of “karma” (blue orbs) to complete the fusion procedure. You can get upgrade materials from new story missions and karma from new and completed missions.

When you complete a mission in story, you unlock three more game modes for the same mission: Harvest, Challenge and Challenge+. Of these three modes, “Challenge+” is the hardest, but that does not mean Harvest mode is easy. A mission played in Harvest mode can be pretty hard if you are ill-prepared. You must equip powerful weapons to your characters, level them up using fusion to improve their stats, choose your best heroes and make sure your some of your team members boast “Brave Burst” skills so that they can launch special attacks against a tougher opponent.  Make sure you use the summon orbs to acquire a rare character from the summon screen. You will get 300 orbs as welcome rewards. You can then level him up faster with the help of fusion.

How to get Combat Crystals

As you already know, combat crystals are used to launch skills of a character. You acquire combat crystals when you attack enemies. You can then use crystals to charge skill spheres and launch them. Here’s how to get crystals:

Recruit a unit that can wield a scepter. Units equipped with scepter generate more crystals when they attack enemies. The “Undine Healer”, which you will acquire in Act 2-4 – “Brutal Men”, is equipped with a scepter.

Make sure all party members are alive at the end of the turn to get additional crystals from each of them. Units put on guard also generate crystals.

So there are two ways to generate combat crystals – by attacking enemies and by staying alive at the end of each turn. Make sure you have at least one healer equipped with a scepter to gain additional crystals.

Save crystals for the last few battles in a story mission. Usually, it’s the last battle where you face tougher enemies and in such situations launching skills using combat crystals can help you defeat them faster.