Set out on a journey to rule the lands. Upgrade your castle and surrounding buildings, prepare for battle against rivalling clans. Destroy monsters that roam the land, work with other players and work against your rivals to see who is the bravest in the land. Who can take control and rule over this vast kingdom? Who will be brave enough to conquer the strong and weak alike? 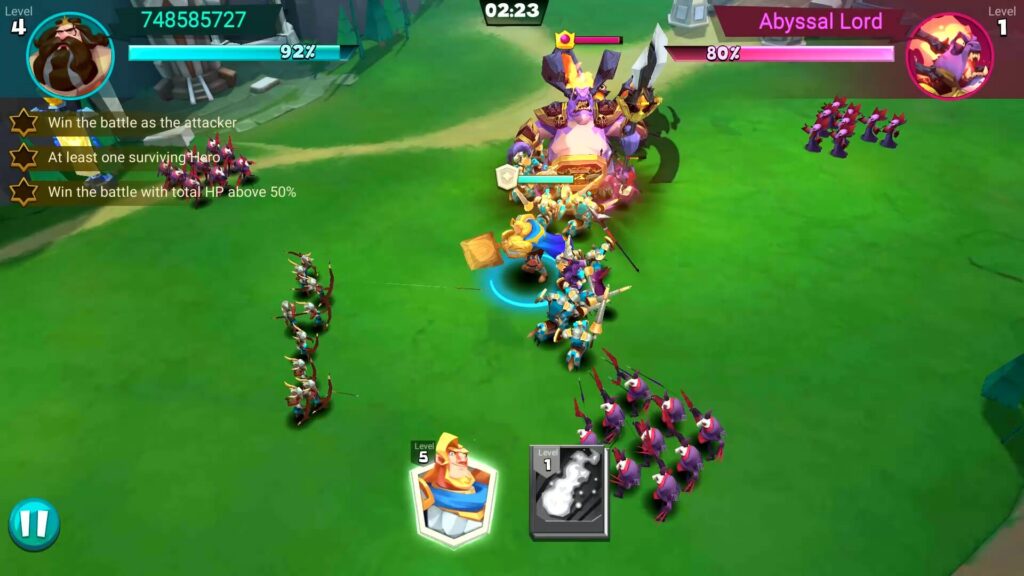 Journey with me through this epic conquest and learn the ropes along the way. These beginner-level Brave Conquest tips and tricks will help you in progressing through the game. You can also have a look at the gameplay video below to know the basics:

1. Read Through the Tutorial

Brave Conquest does a superb job at breaking down the basics of the game for you. It teaches you how to grow your kingdom, how to battle monsters, how to upgrade your keep and become a powerful ruler. Don’t skip the dialogue and read through the various tips that flash on your screen when content is loading.

1. Mechanical: These troops can attack from a long range, making them similar to ranged troops.

2. Support: These troops can heal your other troops and summon minions to support your troops in battle.

3. Beast: These troops can taunt enemies and have a high critical rate, meaning they can apply higher amounts of damage when attacking.

Understanding the troops capabilities will help you in your choice when getting ready for war. If you are facing Infantry troops and Cavalry, but do not want to be at a disadvantage, or your heroes to take the brunt of damage, you can use Infantry with Mechanical support. That way, your troops will never be at a disadvantage and while you are keeping their Infantry and Cavalry (who are susceptible to Infantry), busy. You can apply damage from a long range with your Mechanical support.

3. Upgrade Abilities of Heroes and Troops

Upgrading both your heroes and your units in Brave Conquest will help you on your way to glory. When upgrading heroes, their attack and Hp will increase – making them a stronger force to be reckoned with in battle. It also increases your player exp and overall might. You need coins to order to upgrade your heroes, which can be found in stages, collected from your cabin’s every hour, by completing certain missions and even just laying around your kingdom.

When upgrading your troops, similar to heroes, their HP and attack increase, while also increasing your player exp and overall might. The difference is, troops take medals to upgrade and instead of upgrading a single character, you are upgrading a whole squadron of that troops’ type.

Tip: In matches you can use multiple battalions of the same type of troop. When first starting out, level up one of each type of troop – Cavalry, Infantry and Ranged.

Attack as many squadrons as you can on the map, the more experience you get while battling enemy fighters, the better you will become at strategizing against the enemy. This is a great way to farm for resources and practice using your heroes’ special abilities and magic spells.

By practicing against the computer, it will help you devise strategies that will assist you in winning against other players in the game when raiding real people in other clans in the expedition portion of the game or in the arena.

5. Side Quests and Achievements

There are many simple side quests you can accomplish by utilizing your farm, restaurant and factory. The side quests require you to “trade” different commodities that can be acquired by growing specific farm foods like wheat, beer from the restaurant, or creating lumber in the factory. You can exchange these goods for coins, medals, building material and exp. It is a great way to gain resources on a constant and steady basis.

Gems are the in-game premium currency. Gems can be earned by discovering new heroes, new lands, hunting animals on the world map and levelling up. If you wish, you can also purchase gems in the shop. Gems can be used to fast track missions, complete buildings and acquire new heroes.

Brave Conquest’s “War College” is a series of missions that offer a steady number of medals, coins and building materials. The farther you progress, the higher you will raise in the overall local and world standings. Complete missions with 3 stars in order to receive more rewards. The more stars you collect overall will allow you to unlock certain milestones that will help with your overall progression in the game. These guaranteed rewards will help you upgrade heroes and troops, earn you building speed up bonuses, reward you with limited edition items and even gems!

8. Use Medals to Level-Up Troops

Use your medals to upgrade your troops. By upgrading your troops, they become more powerful, they may receive an increase in HP, attack, EXP and might contribute to your overall power score. Stronger troops will be able to take down tough opponents and

You can gain medals from the Hall of Honor, by completing various stages, in the arena on successful attacks and after winning in the arena and earning a certain number of stars based on your successful matches.

Tip: Level up your troops as you progress in the game, as the stages get harder, stronger troops will be needed to beat the foul beasts and anti-heroes.

Hit up Brave Conquest’s “Arena” in order to play against other players head to head. Take on their troops and heroes with your own squad. You can get a brief glimpse of their heroes and the troops in their formation by hitting the “i” button located on their player card. You can also see the troops and heroes’ level, which indicates their abilities, skills and overall power. Also included in the info section is their troops power level, which can be compared to your own, how many trophies you would earn with a win and how many trophies you would lose with a loss.

Gain trophies and watch as you climb the leaderboard in your local and world ranking! The more trophies you gain, the better rewards you earn each season, for finishing in a higher league. The leagues range as low as bronze, and as high as legend. You will only earn rank rewards for finishing in the hero league with at least 4000 trophies. Gaining stars in the arena will earn you bonus milestone rewards, similar to War College.

Tip: If all the players you have matched are beyond your skill level, you can refresh the match board in the top right-hand corner with 150 coins.

By joining an alliance, you can play with friends and reap the additional rewards and events specific for collaboration. In Brave Conquest, Alliance War and Alliance Trials are specific to players in an alliance. The other benefits include access to the “Mana Pool”, which is an alliance specific shop. Earn Mana Pool currency by assisting others in their building endeavors with “alliance help”. Alliance help speeds up the construction or research time of buildings and abilities, making it easier and faster to upgrade and progress in the game.