Obscurities are all over the place. Since the early periods of mankind, loads of happenings have been far beyond our understanding. That is the place our creative mind ventures up. Despite the fact that we’re living in a computerized reality where an ever-increasing number of events and things begin getting sensible clarifications, there’ll always be something inexplicable. Mysteries lived on through hundreds of years having our fantasy snared: it all began from myths and legends, then transferred to books and films, and finally got to video games. 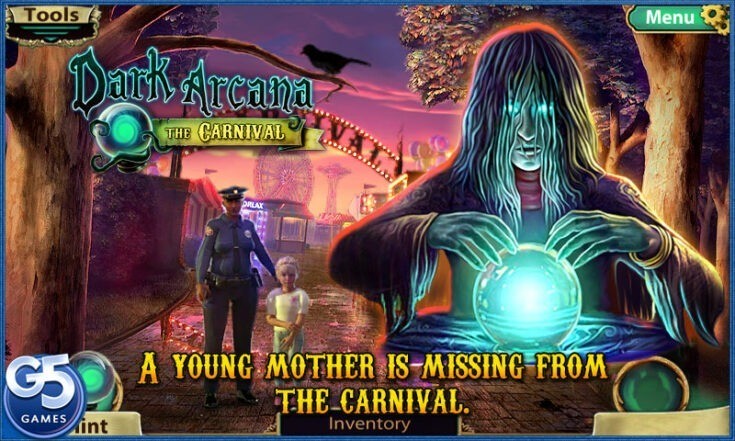 The mystery in this game unfolds as a creepy carnival arrives in town. During one of the shows, a young mother goes missing and you’re to only one to find her before it’s too late. You’re going to investigate 2 worlds: the real one and the paranormal one that exists behind the carnival’s Hall of Mirrors.

Along your way, you’re going to unveil the secrets of an ancient evil force dormant for centuries and learn an unnerving story of one of the carnival’s workers, who accidentally killed his fiancée during a show many years ago. Plunge into terrifying locations and stop the evil forces from dishing out another terrible crime.

A thrilling story unfolds in front of you as you immerse yourself into the noir, dark atmosphere of this hidden object mystery game. Coastal Hill, a small snug town by the sea, used to be your summer vacations spot when you were a child. In a bizarre twist, you find yourself at its gates once again. You can’t recognize it: a windmill, an airship, carts… The town seems to look like ages ago! What’s happened to the people here? What’s going on? You’ll have to find it out and unravel the mystery of the twilight town in this gripping hidden object game.

Coastal Hill is available to play offline: the only feature you won’t have access to is leaderboards. But if you’re not keen on competing against other players, this is certainly not a problem for you.

In this game, you’re going to crack the most mysterious and audacious crimes. You’ll try on the role of an aspiring detective. While investigating weird events and their outcomes, you’ll also help with relationships, romance, and other stuff.

The game takes place in the 1960’s environment and is split into chapters. Each of them has beautiful scenes with hidden objects of varying levels of difficulty. Despite a notification that the game might require an internet connection for social features, it can be freely played without Wi-Fi if you’re not into constant cooperation with your friends in the game. But, to get the next episode, you’ll have to connect to the Internet to download it from a game’s remote server.

This game is an excellent opportunity to learn historical facts about the world’s greatest figures, sights, and epochs. Most of them are still covered with mysteries and innuendos. Along the course of the game, you’ll meet ghosts of various famous historical personalities guiding you on a task to investigate why all the humankind vanished from Earth.

This is a great example of how our past can help us solve the issues of the future. Time Gap is here to show you how it’s done. It goes without saying, that you won’t need Wi-Fi for this.

Murder in the Alps

This game revives the genre of interactive crime novels. The events take place in the 1930s immersing you into the atmosphere of that epoch.

The story is set in a distant hotel in the Alps. One day, one of the guests vanishes without a trace. This leads to other mysterious disappearances. You act as Anna Myers, a journalist from Zurich, staying at the hotel on holiday, but seems it’s up to her to show off her investigation skills and learn the truth about the strange happenings. Each new day provides you with new clues and evidence, making it inevitable to soon expose the person behind those disappearances. The only thing you might need WiFi for is to upload the next chapters of the storyline.

Like any other mysteries out there, this game’s storyline is based on the strange disappearance of a journalist. Several years ago his investigation led to Wheel of Time Corporation’s research center closure as they were performing dangerous experiments with time and matter.

Since then, rumors have kept emerging that the center has been conducting its stuff off the books. Jon Doe, the journalist, revives his investigation of those rumors. He finds out the corporation has been hiding information about its experiments. Nobody believes him so he decides to sneak into the laboratories to gather evidence. Later on, Jon Doe’s boss announced the journalist has gone and nobody has seen them for quite a while.

A special gathering took place in the manor and completely devastated the mundane life of its inhabitants. The host of the manor Mister X has suddenly vanquished leaving nothing but a weird letter. Soon after the host’s disappearance, the house is infiltrated with magic, strange creatures, and eerie characters. While exploring the house you’ll complete tasks given by those people. Step by step, you’ll get on the possible trail of Mister X and learn the truth about his mysterious disappearance.

The game features an eerie storyline which, along with its graphics and the interior of the manor, makes this game the perfect addition to the list. Besides, the publisher of the game states the game works great without the internet in the game features in the app store. I’ve checked it myself and the game actually runs without Wi-Fi and doesn’t lack any essential features.

Hidden City features an intriguing storyline complete with twists that makes the game a perfect fit for the list. Strange things have been continuously spotted around the world. As a brilliant detective, you take this case. After a couple of days, things get even worse: your friend is kidnapped by a dark phantom. You’re the only one who can save him and put these otherworldly happenings to an end.

Off you go on a venturesome journey where magic, witchcraft, and science co-operates, deepest fantasies come true, and eerie creatures swarming the streets. To rescue your friend and unveil the truth about this phenomenon, you’re going to complete tricky tasks, explore locations, craft amulets, and partner up with your friends.

The plot of the game is what makes it the participant of this TOP-10 list. You’re a part of an ancient order where people with special abilities to travel across fantasy worlds belong to. One of the top members of the order who also turns out to be your uncle disappears under weird circumstances.

You’ve been entitled to find him. Confront the mysterious forces that keep your uncle imprisoned, crack tricky hidden object puzzles and protect the sacred Artifact of the Order! Use your special powers to pick up the trail and bring your uncle home safe and sound.

A whirlwind of inexplicable happenings has recently emerged all over Europe. You’ve been enrolled by the secret society to help them unravel the truth behind those strange events. Prepare to explore Paris, London, Venice, Athens, Berlin and even more!

Find hidden objects, solve tricky puzzles, escape danger and dash through the ranks at the Mystery Society and become the world’s greatest detective. The game deserves to be on the list as it has all the elements that make you thrilled up to the end as the game plot is full of unexpected twists and shocking quests to work on.

My objective was to make a rundown of hidden object mystery and detective games for Android and iPads that their fans would discover valuable as titles above can be played without an Internet connection.

In specific circumstances, you may finish up without an Internet connection making it difficult to play your beloved games at whatever point and in any place you want. The apps from the rundown above had been tested by me to keep running without Wi-Fi: their core gameplay remained unhurt allowing you to progress at a usual pace.

A large portion of the previously mentioned titles are accessible on both Google Play and the App Store. Furthermore, the majority of apps are free-to-play titles with ads or in-app purchases. Here’s a hint: switching to the airplane mode on your gadget while playing the games also turns off irritating advertisements springing up unexpectedly. This will make your gaming experience even better.