Beat Racer is a fast-paced, music-themed racing game from ZPLAY and Lila Soft games. Its concept reminds me of Audio Surf where players maneuver a vehicle on a musical highway, collecting blocks and earning points. Beat Racer’s visuals are stunning to say the least and the songs played in the background uplift the spirit. However,  it would be better if the speed and mood of the race change with the song tempo. Still, it’s a nice musical racer and boasts a great track list. 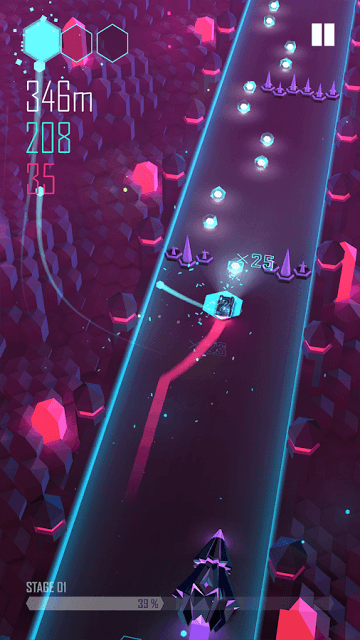 Your goal is to maneuver a futuristic car on a highway collecting “beats” and “gems”, jumping over obstacles and defeating a speedy drilling vehicle that looks to overtake and destroy your car. You can switch between lanes to collect beats and gems, swipe upwards to jump over spikes and swipe downwards to launch a laser beam when the enemy vehicle aligns with your car. Each long ride is divided into stages that last as long as the song that’s being played in the background. You will complete a stage when the song finishes.

As you progress, stages will become harder to complete and there will be more hurdles blocking your way. The enemy vehicle quickly appears when you fail to get past obstacles or dash into them, so you will have to choose the safest lane or swipe up at the right time to avoid bumping into them. The graphics are slick and the controls pretty smooth. I did not have any problems moving my car.

Beat Racer’s songs list features dance/electronic music, which keep players up on their feet all the time. But it should have provided the option to let players connect the game with Google Play music and choose their own song or create their own playlist. Since it’s a music-themed game, I would recommend wearing headphones when you start playing it. Overall, it’s a great game and a treat for all music lovers.

Really addicting rhythm game. We reviewed it too!