Badland Brawl is a stunning arena battler by Frogmind. Set in the Badland universe, this game lets you fight other players in PvP and 2v2 co-op battles. Your goal is to destroy your opponent’s tower before he does to win trophies and eggs. A tower is divided into three floors and to win, you will have to deploy units or “clones” to demolish more floors than your opponent’s.

You will begin with 8 clone cards and a king that attacks any incoming enemy using his crossbow. When you begin playing, 4 random cards are chosen from your deck, you will need to tap the card and then launch it using a slingshot towards the opponent’s tower. You will need mana to launch a clone, so make sure you check the mana bar before launching units.

Badland Brawl’s physics-based gameplay can be fun, but challenging. Each clone is different from the other and so their mass will have an effect on their speed. A heavier clone will walk slower than a faster one. The speed and the distance traveled will vary from one clone to another. If you just take a look at how the Bomb Drone and the Big Smith behave, especially when they get hit by other clones, you will get a clear idea of the physics-based mechanics of this game.

You will learn the basics from the game’s tutorial mode, which you can watch in our gameplay video of this guide. But if you want to know which clones should be included in a battle, how to get more rewards, and how to win a PvP or co-op battle, just follow these tips, hints and strategies:

1. Practice Before Playing a PvP Match

I know how eager you are to play your first player vs. player brawl. However, you should know the strengths and weakness of each unit (clone) in your team before your first PvP battle. Thankfully, the game has a practice mode that allows you to play against a bot to improve your strategy. Once the tutorial finishes, you can start a “versus” battle in practice mode to know how well your party performs. You can try different strategies and combos in this game mode or just test out a single clone to know about its abilities and weak points on the battlefield. 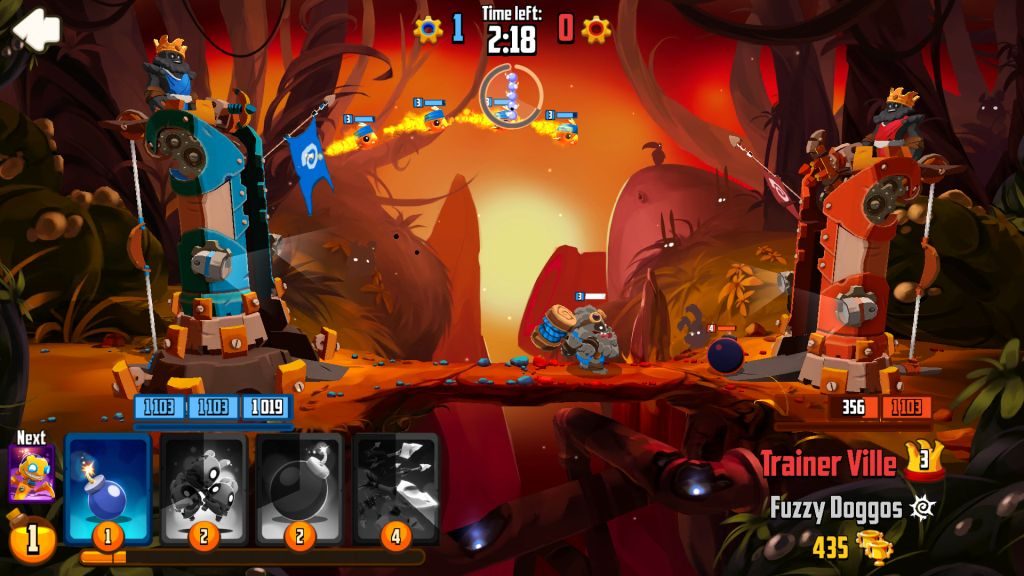 To get started, just swipe left and tap “Practice” under “My Party”. To know how a single unit moves and attacks, tap a unit’s portrait and then tap “Practice” located on the bottom of the unit’s info page.

2. Destroy the First Tower to Get a Bonus Crossbow

A tower is divided into three floors. The numbers below a tower shows the HP of each floor. Your goal is to destroy your opponent’s floors. The player who demolishes more number of floors at the end of a brawl is the winner. You will win if you destroy all three floors of your opponent. When you knock down the first floor, your king will get an extra crossbow, which can be extremely handy in eliminating incoming clones. You will notice that the crossbow shoots two arrows instead of one. Make sure you deploy your best clones to destroy enemy tower’s first floor faster.

3. Your Party is Incomplete without Bomb Spider and Drone

The spider and drone are some of the very few bomb carrying clones in Badland Brawl. You should have them in your team if you are serious about winning a PvP or 2 vs. 2 co-op matches. They can inflict huge damage when they hit their target and can be very useful in co-op matches. 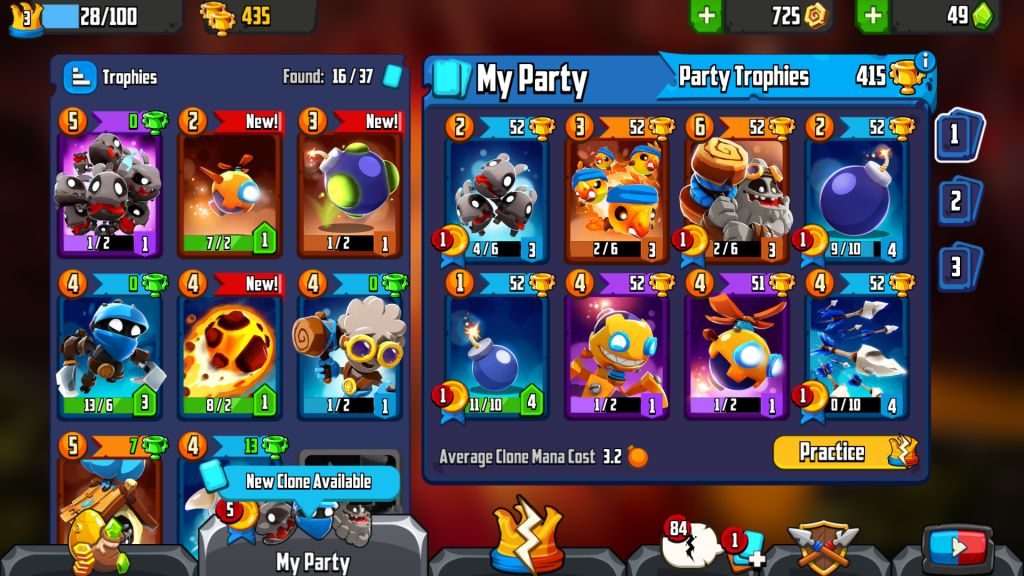 The drone flies towards its target and explodes when it reaches the tower. It releases the bomb if destroyed. The spider carries a bomb and walks slow at first but then slowly gains speed, scuttles towards his target and explodes when it reaches the opponent’s tower. Both clones require 4 mana each to deploy, so their mana requirement isn’t too much considering the damage they deal to enemy tower. Make sure you upgrade them to increase their HP and tower damage when you receive their duplicate cards.

4. Tiny Clones Can Be Very Useful in Battle

You are making a big mistake if you are underestimating the ability of tiny clones such as fire birds and doggos. They can be very useful in certain situations, especially when large, powerful units such as “Big Smith” and advancing towards your tower. They can temporarily stop such units and can even defeat them. So if your opponent launches the Bomb drone, you can stop by deploying fire birds. If he deploys a bomb spider, you can slow him down by launching doggos. You can also use arrows to slow down movement of fast-moving ground units. Both doggos and fire birds require fewer mana than other units and are one of the favorites and “must-haves” in a party.

Combining plain bombs with a clone that pushes them towards the enemy tower is the best way to deal major damage to your opponent. You will first need to deploy a bomb and then launch the blast rocket to push it towards the tower. You can also send “Big Smith” to hammer the bomb and send it flying at the enemy tower.

Use clones such as the blast rocket to push mini or big bombs that fall from above. Bombs, coins etc. fall from above when a “supernatural event” occurs.

6. Combos Can Do Wonders in Co-Op Battles

Once you join a tribe, you can participate in 2 vs. 2 battles with a tribe member or a randomly chosen player. While playing, you can try different combos with your partner. If he deploys a spider bomb, you can choose to drop a drone. This can confuse your opponents and make it difficult for them to destroy both. Basically, what you should do is launch an air unit if your partner deploys a land unit and vice-versa. 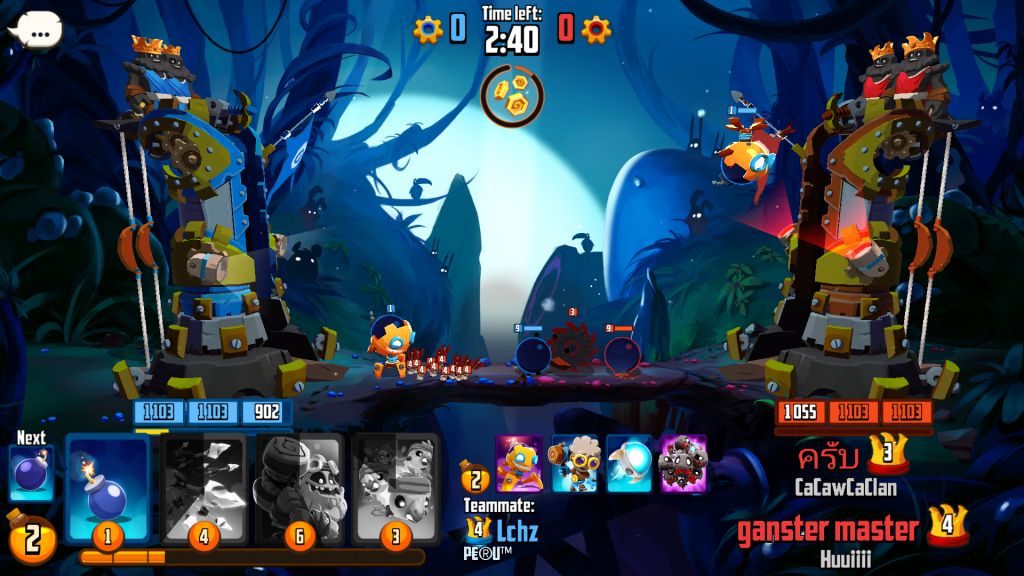 Remember that the cards displayed on the bottom of the battle screen and chosen randomly, so both you and your partner will have to work together. Launching a clone that acts totally opposite of your partner’s unit may help you win 2 vs. 2 battles faster. If there’s a spider ready for launch and your brawlmate launches a drone, then drop the spider to keep enemy’s focus on the ground. It suddenly moves faster towards the target when it’s in the middle of the road while the drone will hover towards its target. If the enemy manages to strike down any one of the two clones, the other one may hit the target.

If he throws a bomb, you can drop the burly “Big smith” who can send anything flying, including bombs using his hammer. He will slam the bomb making it fly towards the opponent’s tower faster, and this will reduce its health.

7. Your Bombs Don’t Destroy Your Tower

You don’t have to worry if your opponent’s clone pushes a bomb towards your base. It won’t explode and cause any damage to your tower. However, it will slowly lose health, which is shown by a tiny horizontal bar above it. Make sure to push it back at the opponent’s base before its health reaches zero.

8. Enhance a Golden Egg to Get More Rewards 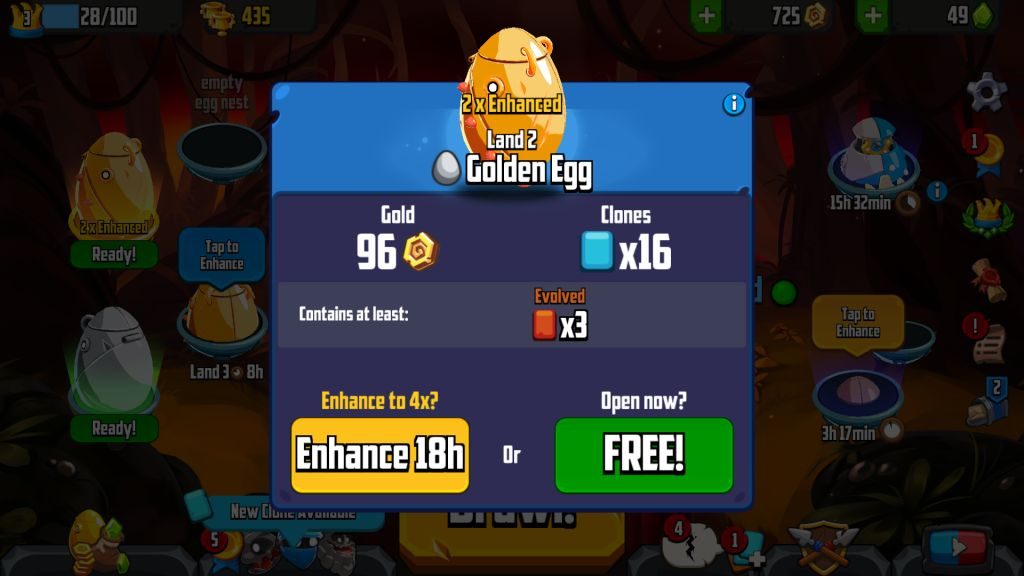 As you receive more and more trophies, you will face tougher opponents. Upgrade your best cards to improve their stats so that you can give them a tough challenge. To upgrade a clone card, you will need a certain number of duplicates. You can get them from eggs which you receive from PvP matches, gear eggs or from the brown egg. Swipe left to go to your cards screen and upgrade cards in your party. 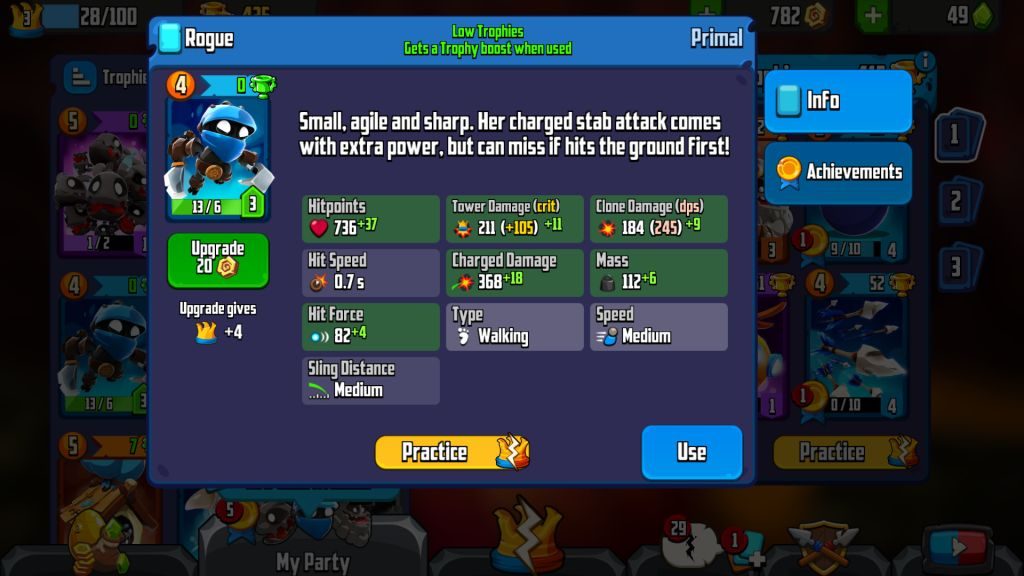 You should join a tribe if you want to participate in special events and receive gear eggs. The best part is that you get to play 2v2 co-battles against other players. You can play a 2 vs. 2 game with a tribemate or play it with another random player. With a tribemate, you will receive bonus gear to open the special tribe gear egg. You can also donate cards to other tribe members if you have extra cards. If you want to request a clone card, just tap the card icon on the right side of the chat screen and the tap a card. You will only see a list of cards which you have unlocked so far.

As of writing this guide, there are two types of eggs in a tribe – a limited-time gear egg that’s available on certain times and an event egg. When the gear egg is active, play 2 vs. 2 matches to collect gears before the timer runs out. You will need 10 gears to grow the egg and open. When the gear egg timer runs out, there’s a cooldown time. You will have to wait for some hours before it becomes active again.

The second is the tribe egg. The tribe egg contains more than 100 gold, 18 clones and has at least 4 evolved units. You and your tribemates must keep playing 2 vs. 2 matches to contribute a certain number of required gears to open it. Play a co-op match with another tribe member to get extra gears so that you contribute gears quickly befor