Angry Birds Blast is the third match-3 game from Rovio. The first two games were Fight! and Stella. While Angry Birds Fight! was more of a competitive puzzler, Stella was a bubble popping game. Blast sticks to traditional match-3 mechanics with exciting new features sprinkled here are there. You will have to tap balloons of the same color to free birdies, defeat pigs by popping balloons beside them, save golden eggs and complete fun quests for rewards.

Blast levels can be quite challenging, and some may require you to play the same level again and again to complete it. With these beginner-level cheats and strategies, you will be able refill lives quickly, know the effects of combining two different boosters. You will also find basic tips to complete levels and earn more coins:

1. Types of Boosters and Effects of Combining Two Boosters 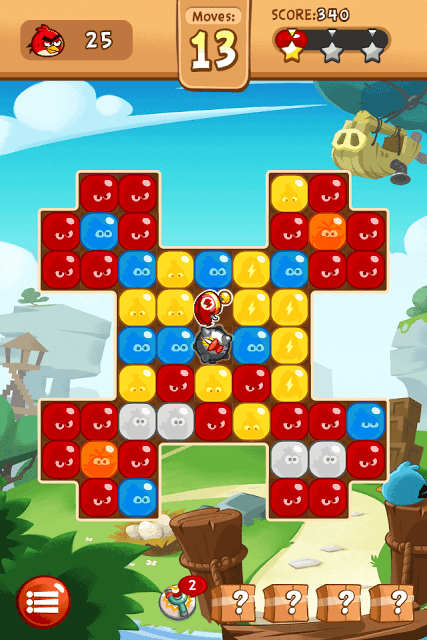 The rocket changes direction every time you match two or more same-colored balloons. So in case you don’t want to remove a column, just match some balloons to change its direction.

If there are two rocket boosters placed next to each other, then tapping any one will trigger a cross-shaped blast, clearing all balloons in a row and column.

Popping 7 matching balloons will create a Bomb. When you tap a bomb, it will explode, destroying surrounding balloons. Tapping a bomb placed next to another bomb will create a bigger explosion, clearing several balloons at once.

If there’s a rocket next to a bomb, then tapping any one of the two boosters will launch multiple rockets. These rockets will trigger explosions, removing almost half of the game board.

You are really lucky if you manage to bring both Laser Gun and Bomb/Rocket close to each other. Tapping on a laser gun or Bomb converts all same-colored balloons into bombs. So if the Laser gun booster’s color is red, then all red balloons scattered all over the board will turn into bombs and explode.

If a Laser Gun and Rocket boosters are placed next to each other, then tapping any one of them will convert all balloons of the same color into rockets and clear rows/columns simultaneously. So if the color of the laser gun is blue, then all blue balloons will turn into rockets.

Try combining a laser gun with another laser gun to see its effect on balloons.

2. The Time-Lapse Cheat Works for this Game, At Least for Now

There are a couple of ways to get lives, but if you want to cheat your way to Angry Birds Blast to get all 5 hearts, you can try the time-lapse trick. All you have to do is move the time ahead by an hour or so when you have a few lives remaining. Here’s a step by step guide to make this cheat work: 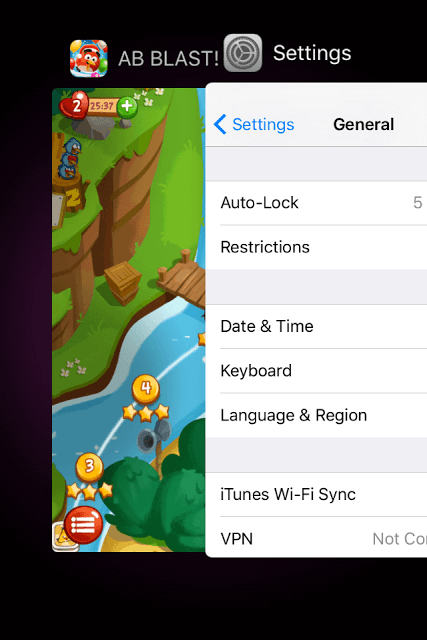 Lives are denoted by hearts, which can be seen at the upper right corner of the screen. When there’s only 3 or 2 hearts remaining, check how many minutes are left before the next refill. This will give you a hint as to how many minutes/hours should you move ahead to get back remaining lives. Here we are aiming for a full lives refill, so we will try to move the time ahead by at least 1 hour. If you try to be too accurate, say move the time ahead by 25 minutes or so as per the remaining time shown on the upper-left corner of the screen, then the trick won’t work when you set the time to “Automatic” again.

On your iPhone, keep the game open and double-press the home button. Tap the Home screen and go to “Settings”.

Scroll down and tap “General”. Under General, Scroll down until you find “Date & Time”. Under “Set Automatically”, move the slider to the left side to turn it off.

Now tap the Date and Time section under “Time Zone” and set it at least one or two hours ahead.

Now double press the home button and tap the app. You will notice that all five lives have been refilled.

Double press the home button again to access the date and time settings and turn on “Set Automatically”. Close the setting and enjoy!

As of writing this guide, the time-lapse cheat is working pretty well, but then it might not work if there’s a new update. Use this cheat at your own risk.

3. Other Ways to Get Lives

If you don’t want to cheat, then there are two more proper ways to get lives:

Tap the heart icon at the upper left corner of the screen. In the “Get Lives” window, tap the “Ask a Friend” button. This will let you request lives to online players. Try to request lives to all players as it will increases the chances of getting free hearts. I would also recommend logging in to Facebook so that you can also send heart request to your Facebook buddies.

You can spend gold to get all fives lives. Gold is premium currency in this game so try to save the free gold you receive for getting all 5 lives. Don’t waste gold to get extra moves in case you fail to complete a level. You can earn gold by discovering new hatchlings in certain levels. You will get 25 gold by logging in to Facebook.

4. Here’s Another Trick to Get Lives 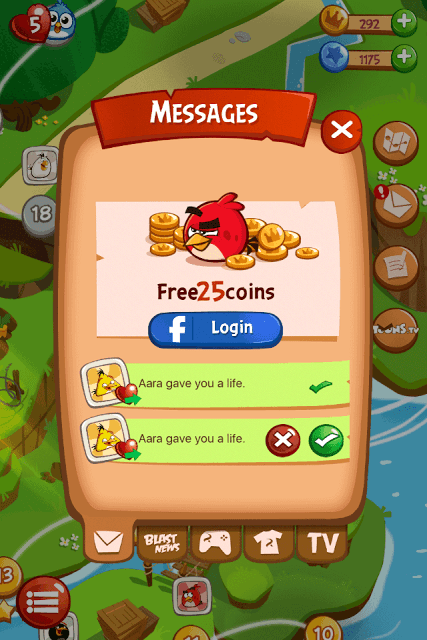 Tap the envelope icon on the right side of the screen to accept or reject lives sent by online players. Don’t press the red reject button, save those lives when you have lost some. When you lose a life or two, go to your mailbox and press the green accept button to add it to your total number of lives.

On your Angry Birds Blast map, you may have seen adorable little birdies appearing on random level markers on the map. Completing levels where such “hatchlings” appear will let you complete a quest and earn rewards. Tap the quest icon, which is located just above the “Toons TV” icon on your map screen to access a list of quests. 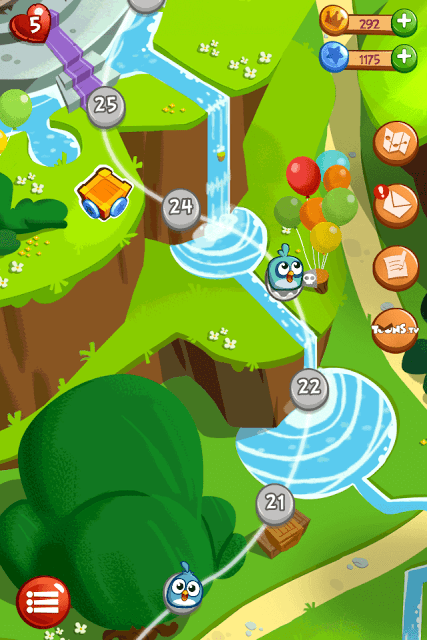 Thank you so much for your insight

Many thanks for your advice - have now progressed to level 119 . But had to buy gold coins to extend the number of moves for most games past 100. In your opinion, from which level of the game onwards are only really playable if one has to buy gold coins - I am sure the creators have built in a “ no win without spending money” level - easy levels to start with to catch the interest of players then - spend money if you wish to progress ?

All levels are playable, but some levels are hard to complete. You can finish them, but on a trial and error basis. You can buy gold coins or just replay those levels several times. Luck plays a big part in such games since new balloons are randomly generated after you match balloons on the board. Use power-ups wisely and the more power-ups you combine (swapping adjacent power-ups), the faster you will reach your goals before you run out of moves.

Hello, tearing my hair out trying to get past level 100 for the part three days - spent a fortune in extra gold coins trying to add extra moves as there never seem to be enough to spill enough red paint to collect all the necessary red birds . The walk through on you tube are useless as my screen colours are different from those shown - I understand I have to clear the pigs and boxes but - never enough moves - is there a fault with the level 100? Kind regards

The problem with color matching games is randomness. In this game, colored balloons are randomly generated on the game board, making it difficult for players to complete a level. This is why you will see different screen colors on another player's game. Also, there's always one level that's pretty tough to beat. You can play it on a trial and error basis to win it if you don't intend to spend real money on boosters or extra moves.

In level 100, the key to win is to combine power-ups to create a bigger explosion. This will clear obstacles and you will save moves on clearing pigs and coloring bubbles red. Just make sure that there are no pigs in a column to turn all balloons into red. You can then match them to get lots of red birds. Even if there's one pig in the middle of a column, then balloons after it won't be colored red when paint is spilled.

Having real trouble getting past level 19 - how on Earth do I collect the hot air balloons? Can anyone help? Thank you

You will have to move the hot air balloons to the top of the game board until they are sucked by one of the 6 suction cups on the left and right side of the board.

How do you make the paint bucket tip on level 78? It's so frustrating!