Alien Path is a tactical puzzle game developed by appxplore, creators of the hit match-3 puzzler “Alien Hive”. The game combines role-playing and card-battling elements with an ingenious “path-finding” puzzle gameplay. Players have to tap on special arrow tiles to change their direction and then swipe the screen to make the alien move. The arrows will lead him to his target. The game board has several obstacles, traps, portals and robots. Your objective will be to destroy all robots to advance to the next stage. Some stages will have boss robots that would be tough to beat and you will have to use your brains, get the right arrow combos and make the most of portals, cards and pods to defeat him before he does.

The game’s story revolves around the adventures of a homeless alien who vows to free all planets from the clutches of an evil robot race that invaded his home planet. Each planet consists of several stages. You will have to beat those stages to rescue inhabitants from robot rule. Each stage offers plenty of challenges, and making the right moves is crucial for winning the battle against robots. Here are some handy tips, hints and strategies that will help you complete stages easily:

1. Examine the Board and Look for Combos

In this game, arrows decide the alien’s path. You will have to tap on arrow tiles to change their direction to help him move to his target. Don’t get confused with the direction of the arrows. An arrow pointing up will make him move up when the alien lands on that arrow tile. An arrow pointing right will make him dash towards the right when he lands on that arrow tile. Make your own path by changing directions of arrows so that all arrows connect and lead you to the enemy. After creating a path, swipe to move the alien and let the arrow tiles lead him to his target. 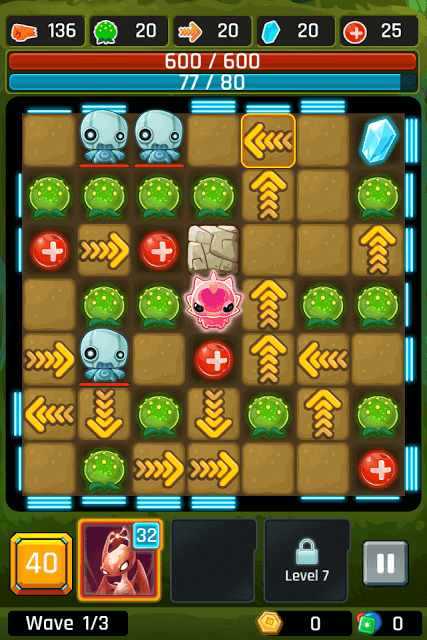 Examine the game board carefully. There’s no timer, so take your time and create that perfect path that leads you to attack two robots in one move. Make the most of blue borders to get combos. Hitting those blue bounce walls at the edges of the game board will make your character bounce off them. The more number of lines a wall has, the further your character bounces. While creating a path, make sure the path has several pods so that any nearby robots will take damage while your alien moves towards his target.

Besides pods, you can also take advantage of arrow tiles to inflict arrow damage to robots. How this works? Well, the number of arrows that lead your alien to the robot is added to his base damage. So if 3 arrows lead him to his target, then 3x(current arrow damage) will be the total damage added to your characters starting damage. You can see the damage of a single arrow tile at the top of the screen. To increase arrow damage, use spirit sparks to level up your character. You can also use an arrow-specific supreme spark to max out arrow damage stats.

3. How to Boost Your Alien’s Attack Damage

As you progress, stages will become more challenging. Those evil robots can’t be destroyed in one move. It will take several hits before a robot can be defeated. On the game board, tap and hold on a robot to check his HP. Now tap and hold on your character to check its total damage (starting damage + extra melee damage from a power card). If your enemy’s HP is higher than the alien’s total damage, then it will take more than one hit to defeat him completely.

Here’s a breakdown of your character’s total attack damage:

Arrow damage:  Added to your alien’s starting damage stats when he hits a robot. The number beside the tiny arrow icon at the top of the game screen is the arrow damage. The more arrow tiles lead your character to the enemy, the more damage you deal to enemies.

So basically your alien’s total damage = base damage + power card damage (if you have equipped a power card that adds bonus damage to your character’s starting damage.) + arrow damage in case he crossed over an arrow tile on his way to the enemy. The attack stats shown on the upper-left corner of the game screen is your starting damage plus power card damage.

To increase your character’s total damage, follow these tips: 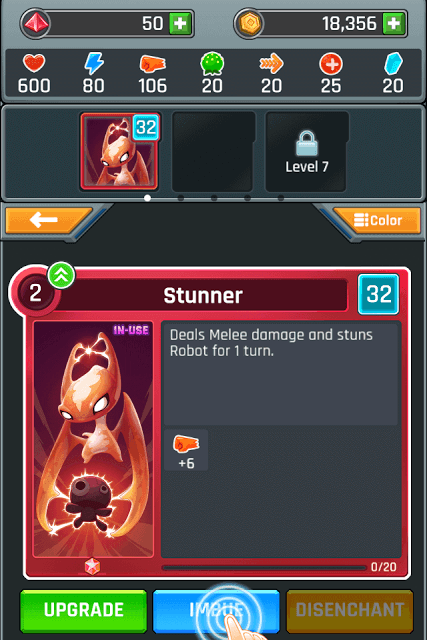 Upgrade power cards that add bonus damage to your character’s starting damage. The “Stunner” card is an example of a power card that provides bonus damage to the alien. Collect colored sparks to upgrade and increase its bonus damage. You may get sparks by breaking stones or by completing a stage before a set number of moves. So if a stage demands that you defeat all enemies within 50 moves and you complete it with plenty of moves remaining, you get a “speed bonus” that might contain colored spark or a supreme spark.

You can imbue your card with a supreme spark to get high stats bonus. A damage specific supreme spark max outs stats of an attribute.

4. When Upgrading a Card, Tap the Upgrade Button at the Right Moment to Get Max Advantage

There’s a slight twist to card upgrades in Alien path. Instead of hitting the upgrade button after meeting upgrade requirements, you will have hit the button at the right time to get maximum benefits. In the upgrade screen, you will see a slider constantly moving from left to right and vice-versa.

The slider appears beside the stats bonus. You will have to press the upgrade button when the slider is on the green zone to get max upgrade benefits. The slider appears only when you are using common sparks to upgrade. It won’t appear for upgrades that use supreme sparks.

5. How to Get More Spirit Sparks 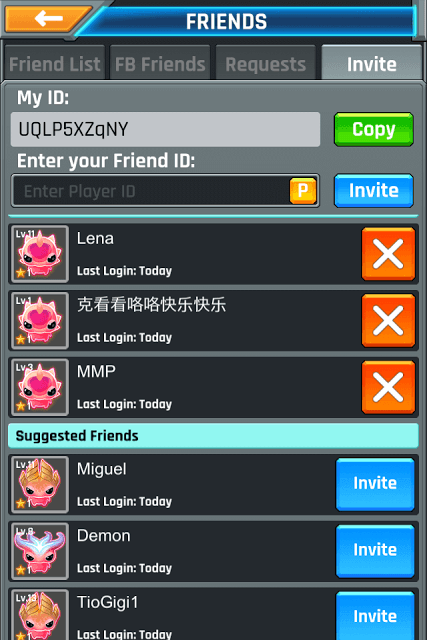 On your home screen, tap the UFO to get a special reward. All you have to do is watch a 30-sec ad to get one.

Going through pods on your way to your target deals extra damage to nearby enemies. This will weaken them as their HP decreases. You can then easily take them down in one or two moves. Look for paths that contain several pods in one line, but do examine the board to see whether there are nearby enemies.